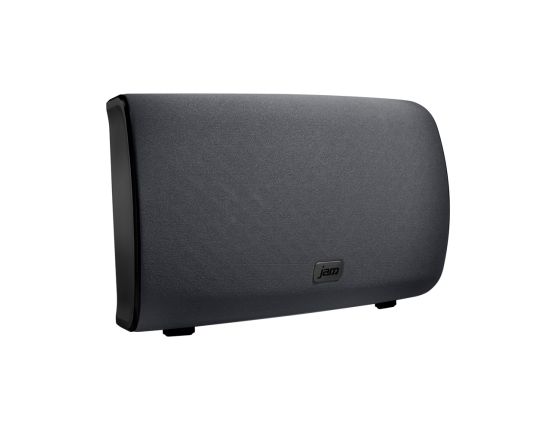 It should come as no surprise that the market for Wi-Fi speakers is absolutely booming. The ability to utilize multiple speakers throughout your home, without the need to cut holes in the ceiling or fish cables through your walls, enveloping every room with the music you love, while controlling it all through your smartphone or tablet, is incredibly enticing and very satisfying.

Manufacturers of all stripes are looking to capitalize on the consumer driven demand, and Jam Audio has stepped up to the plate with two Wi-Fi speakers, dubbed Symphony and Rhythm.

If you are new to the world of Wi-Fi audio systems, I wrote a piece about the benefits Wi-Fi audio that can be found here. 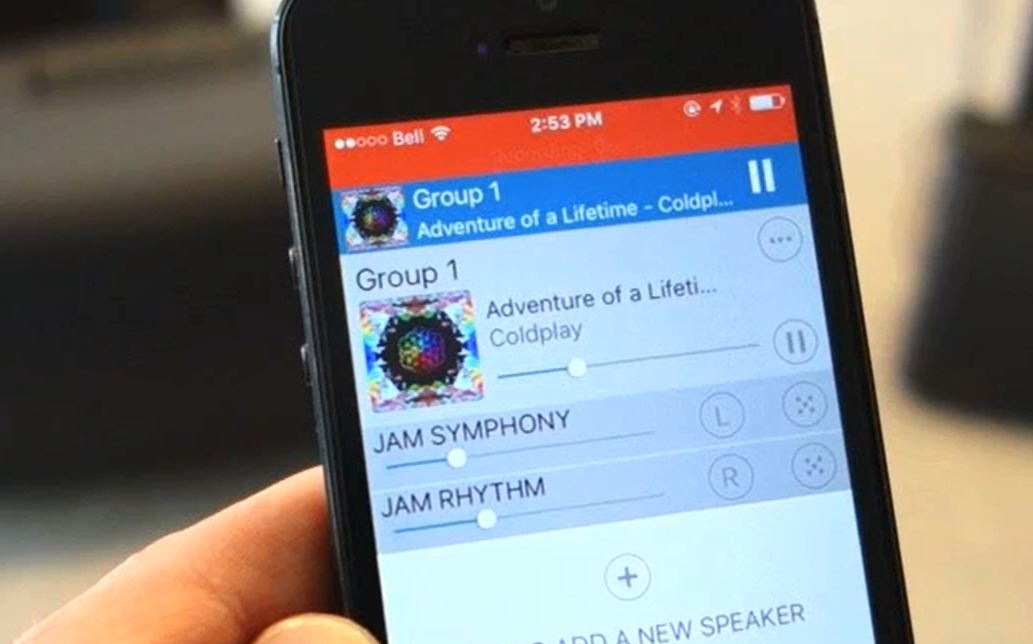 Driving both speakers is the Jam Wi-Fi Audio app, a free download from Google Play or the App Store. The app allows you to quickly connect the speakers to your home Wi-Fi network, and you can be listening to music in a matter of minutes after unpacking them from the box. The app provides you with the choice to tap into your own music library, stream music from online services such as Spotify, Pandora, iHeart Radio, or tap into any number of online radio programming including local choices. 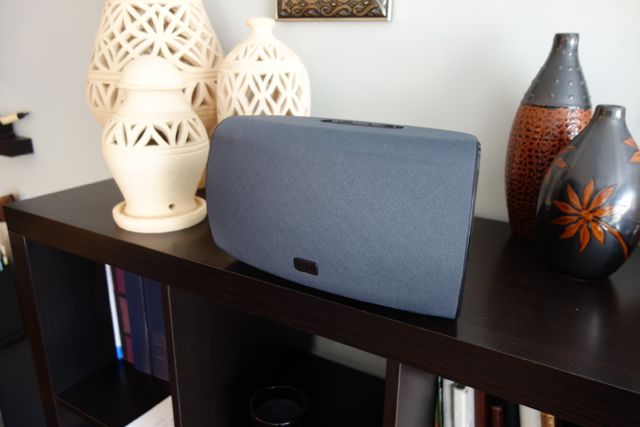 The app allows you to control the output of up to eight speakers individually or simultaneously. If you want to group speakers together to play the same music, it is as simple as a drag-and-drop on the screen.

Once speakers are paired, you can assign one to be the left channel and the other to be the right and create a stereo sound field or leave them as mono speakers. If you are designing a multi-room audio system by placing speakers in different rooms and syncing them, and you’ll have independent control over the volume of each.

If you want to play different music on each speaker you can easily make that happen as well, and your sources remain intact. You can have Spotify streaming on one speaker and listen to your favorite talk radio show on another, all while your kids are downstairs listening to Top 40 on another. The app is user friendly, and very versatile.

Not only can you listen to the fantastic music of the 80’s on your Jam speakers, you can also relive the 80’s by using the unique intercom feature. Tap a button on the app and record a 30 second message that can be broadcast through the speakers. If nothing else, this feature is wildly entertaining for my six-year old who can easily kill an hour just by hearing the sound of his voice talking to him through the speakers. 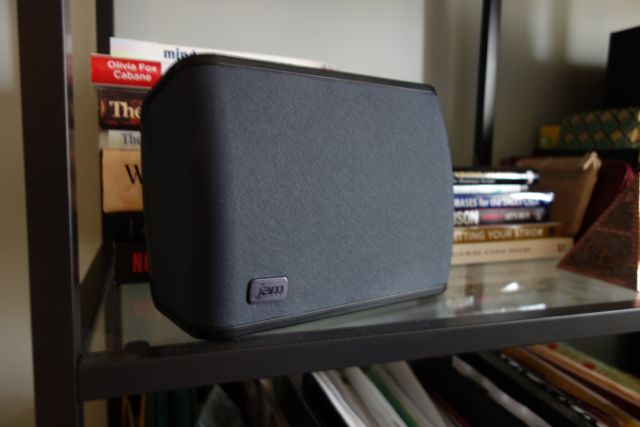 You can assign up to four presets that allow you to stream music without even accessing the app. On the Rhythm speaker, you simply press the preset button on the top of the speaker to toggle through your preset favourites, and the Symphony has four dedicated preset buttons. I used this feature to allow my six-year old to listen to his playlists through the speaker without having to access my phone or get out the iPad.

There is an EQ!

One of the problems I have with most wireless speakers is that I don’t appreciate the way the speaker has been factory tuned. Sometimes the bass is being overdriven or the treble grinds me. Jam has incorporated a basic equalizer that allowed me to change the treble and bass to fit my ears, a very welcome feature. It would be nice to have more than two bands to adjust, but given not all apps offer this feature at all, I’ll take what I can get. 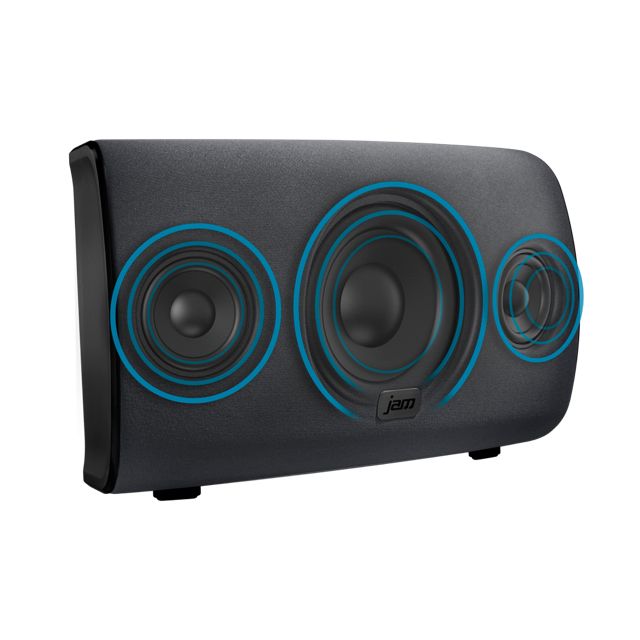 The Symphony is one of largest wireless speakers I have experienced and is a departure from the philosophy of “small and discrete” that seems to be dominant in the mindset of many wireless speaker manufacturers. At almost nine inches wide and eight inches tall it doesn’t seamlessly integrate into the room, however, the size allows for a larger bass driver and two dedicated tweeters to be integrated into the speaker.

Given its size, I was a little surprised when I pulled it out of the box at how light it was. This is rarely a good sign when it comes to speakers, as higher end drivers employ heavy magnets to maximize the ability of the speaker coil to reproduce sound.

The Symphony is intended for larger rooms and open spaces, so I set it up in my open concept kitchen/living room. After I went through the process of connecting the speaker to my network, it was time to let it sing. While it certainly plays loud enough to please any volume junkie, I found that the Symphony was only enjoyable at about 40%-60% volume max, and that was only after crushing the treble with the EQ. Any louder and the sound became quite muddy and lacked clarity. If you are looking for background music in large spaces, this is a decent option, but I don’t think it has got the chops to be your lead singer.

It’s worth noting that I find it difficult to believe any small, wireless speaker could really do a large room justice. The physics of audio just don’t allow for it. I have a 12″ sub incorporated into my stereo in this same space because a 10″ sub just didn’t cut it, and thinking that a 4″ driver could match it is just not realistic. Moving the Symphony to a smaller room allowed the speaker to do its thing without having to be pushed beyond its capabilities, and as a result sounded a lot better. I found I had to turn the bass down on the EQ to compensate for the room gain, further demonstrating the benefit of the equalizer feature. 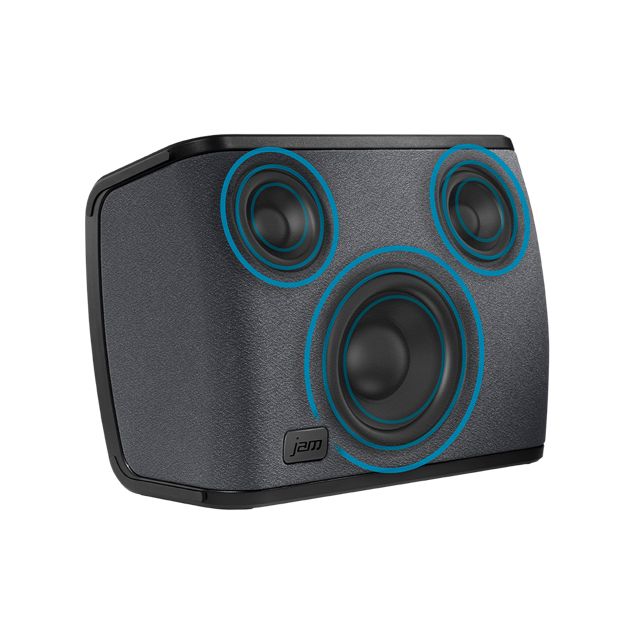 The little cousin to the Symphony, the Rhythm was more in line with what I expect from a wireless speaker. It is small enough that I can put it anywhere, and with all of the same features as its larger counterpart, functions nicely with the Jam app. Connecting it was a breeze, as was syncing the speaker with the Symphony.

I was pleasantly surprised with the sound quality of the Rhythm in a smaller space. It had most all of the qualities I listen for and nothing jumped out at me as a major weakness. There was good definition through the lower-mid’s to present clarity through a variety of tones coming off the bass guitar, and not annoyingly sharp in the treble. A solid offering, and based on the aesthetics, would probably edge out the Symphony if I were in the market for a Wi-Fi setup to be used throughout my home.

There are so many exciting advances in wireless audio and the product offering is going to continue to grow. Jam Audio has developed a couple of nice options for those looking to transform their home into a wireless audio haven, which can be found at Best Buy, and the ease of their app will make this a product that many put on their shortlist.