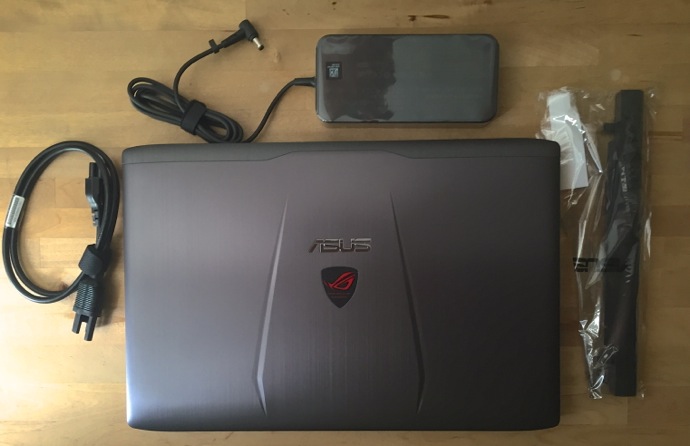 Not Your Typical Mid-range Laptop

Mid-range laptops tend to gravitate toward a respectable, sleek look. Many feature aluminum or brushed metal cases, they have high resolution displays that are almost always highly reflective (touch input doesn’t work well on matte surfaces) and thin is in. Fire them up and you’ll typically see a full-sized keyboard with discretely backlit keys.

The ASUS ROG GL552VW may be priced in line with mid-range laptops but the moment it’s out of the box, it’s clear that this is a rig aimed at gamers first.

It’s not as bulky as some gaming laptops, but make no mistake: it’s big. A 15-inch display and 2.81 kg of mass means that while this is a portable, you’ll need a backpack or large case to carry it. The exterior of my review unit is a tasteful dark grey aluminum with a brushed finish, a silver ASUS logo and Republic of Gamers badge that lights up in red once the laptop is fired up. The cooling vent on the left side also shows a flash of red within. 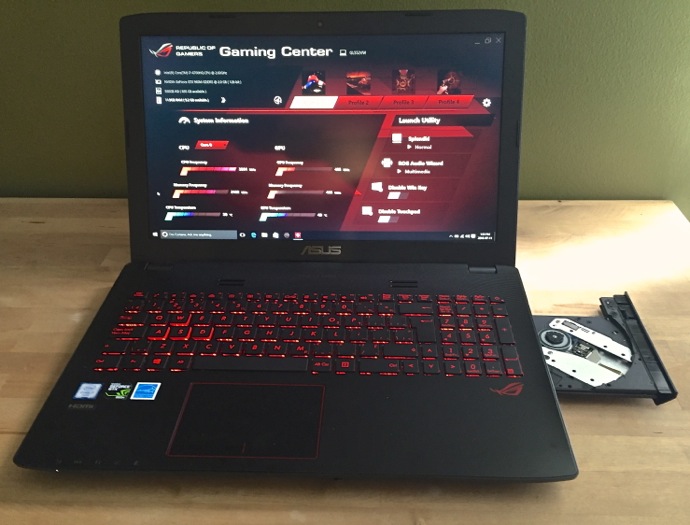 That red theme continues inside, with red LED backlit keys. red trim around the trackpad and, to further dispel any doubts you may have that this laptop is aimed at gamers, the W/A/S/D keys have prominently red-painted edges. 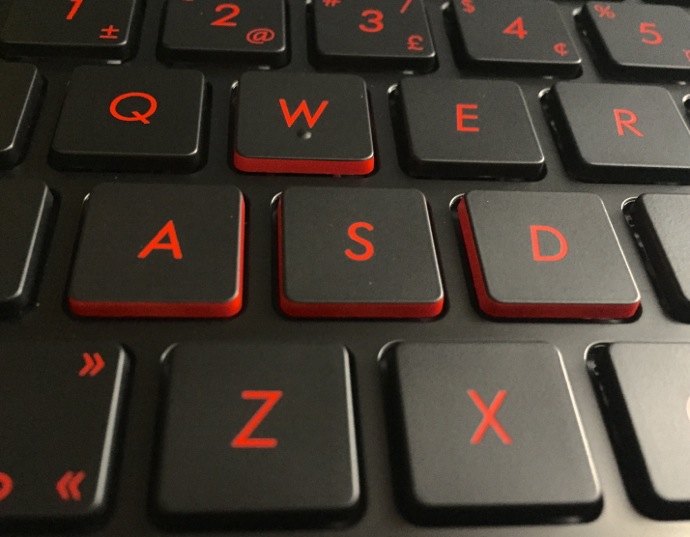 ASUS didn’t just go for looks with the ROG GL552VW, it has gaming cred as well. Stuffed inside the case are a 6th generation (Skylake) quad-core Intel Core 17 CPU, 12 GB of DDR4 RAM (it maxes out at 32GB) and an Nvidia GeForce GTX 960M graphics card with 2GB of GDDR5 RAM on tap. Networking options include the latest Wi-Fi in 802.11ac, as well as Gigabit Ethernet for LAN use. There’s even an optical drive (something you won’t find in those ultra-thin laptops) because many gamers still buy their favourites on DVD.

That keyboard is full-sized and includes a number keypad, and while the Full HD display doesn’t support touch gestures, it has a matte finish that does a great job of minimizing annoying and distracting reflections.

In use, the ASUS ROG GL552VW was speedy, a little noisy, it could get pretty warm near that heat vent and battery life was closer to half-day than all-day—in other words, it performed like you would expect a gaming laptop to. With the GeForce GTX 960M it’s not a fire-breather, but it also won’t set you back multiple mortgage payments. The ROG GL552VW accomplishes the goal of providing the power to play PC video games without breaking the bank.

Unfortunately, there is no magic solution to the mobile gaming pricing dilemma and if you choose to to pursue the target of making gaming affordable—as ASUS has done with the ROG GL552VW—then something has to give on the component side.

In this case, the stock storage is a 5400 RPM notebook drive. You get capacity, but at the cost of speed and noise. Fortunately, ASUS put an easily removable panel that gives you quick access to the storage bays and memory. If it were me, I wouldn’t replace the hard drive (it’s always good to have lots of storage space), but I would take advantage of the free bay to install an M.2 SSD and make that the primary drive for the operating system and whatever game I was playing. That would speed things up considerably.

The other issue is the speakers. They’re forward firing, but mounted rather closely together instead of at the outer edges of the laptop. So you don’t get the depth you could if they were further apart and despite tweaking, they’re on the tinny side and lacking in bass. For gaming (or listening to music or watching movies for that matter), I’d connect a Bluetooth speaker or plug in a set of headphones for better audio.

The target demographic for the ASUS ROG GL552VW is pretty straightforward: gamers on a budget. It’s not hard to drop two or three thousand dollars on a gaming PC, but not everyone who likes gaming has that kind of money lying around. On the other end of the spectrum, you can pick up a mid-range laptop for $1,000 or less that lets you do casual gaming but probably lacks a discrete GPU and definitely won’t have nice touches like a gaming-optimized keyboard.

The ASUS ROG GL552VW fills the void for PC gamers on a budget. It can’t compete against high end gaming laptops, but unlike most mid-range laptops, it can actually offer a decent mobile gaming experience. The GeForce GTX with 2GB of RAM should be sufficient to hit 60fps with many popular titles, so long as you keep the settings dialled down. 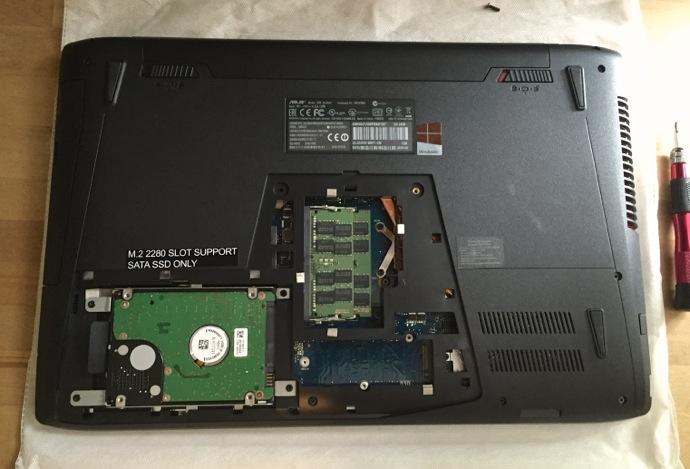 A secondary market would be those who want a high performance laptop for running processor and graphics-intensive tasks. Although this is marketed as a gaming laptop, the combination of a quad-core Core i7 CPU, 12GB of RAM and a discrete video card make it an option for the non-gaming crowd as well. I could see myself using the ROG GL552VW, for example. The red glowing keyboard is excellent (although it would benefit from a full-sized left SHIFT key), the display is sharp and while battery life isn’t stellar, there’s plenty of power on tap for things like compiling HD video, 3D modelling or crunching spreadsheets with thousands of cells. An anti-glare screen is also a win, and very difficult to find on a laptop in these days of multi-touch displays.

One thing’s for certain. The ASUS ROG GL552VW is bound to be a popular choice during back to school shopping. It ticks many boxes for features that students need, and provides a pretty solid mobile gaming experience—all without breaking the bank.