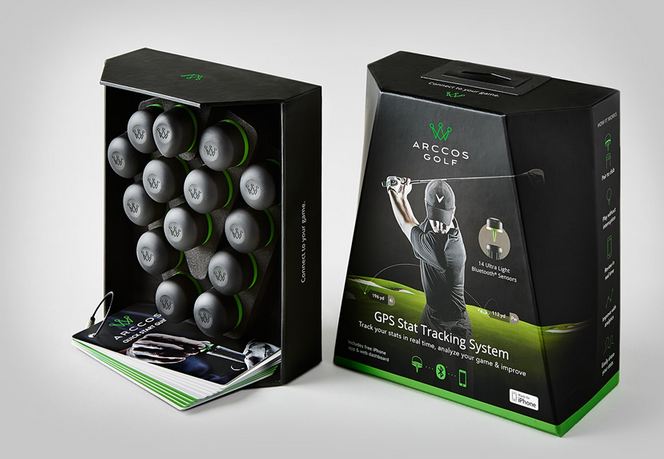 I had my first golf lesson at age 16. My grandfather had paid for me to see a pro for a series of lessons. He thought it was important for a young lady to know how to play the “gentlemens’ game,” so I would one day be able to meet executives, politicians, or CEOs on the course. Golf to him was a way to get in front of the right people on a personal level, in a relaxed setting and make an impression, particularly if you had a good swing. I’ve been a golfer ever since, and it did get me one of the most important jobs I’ve ever had, so for that, I’m grateful to my grandpa.

Despite starting early, I’m still a novice, and feel like I learn something every round I play. That’s why I was excited to test out a set of Arccos Golf Sensors. I was interested to see what I could learn about my game.
What’s in the box
From the packaging to the unboxing, the Arccos is a nice kit. The sensors are individually laid out, and there’s one for each club for a total of 14 (players are allowed to carry up to a maximum of 14 clubs in their golf bag). They’re not numbered, so you just add a sensor to the end of your club by screwing it in to the opening in the end of the grip. From there, you download the companion app for iPhone 4S or above, and you’re off!

Setting up the Arccos is easy. You simply affix the sensor, as I noted above, then pair that club and sensor combo to the app, by selecting which club it’s on from a drop down menu in the app. You can pair everything from hybrids, to a putter, to the woods and a full set of irons.

Now, I will note I had trouble pairing my putter initially. I followed the instructions carefully, and had success with every club in my bag but the putter. I tried several times, tried waking the sensor up, tapping it, switching it to different clubs and nothing worked. As a result I ended up playing my first round without being able to track putts. More on that later. But back to my problem.  I tweeted Arccos (@ArccosGolf) and asked what I should do about a non-functioning sensor. They responded almost immediately asking me to email them. I got a response back to my email just hours later with a list of three possible causes for this problem:

With concise, simple and easy to follow instructions for testing for each of the above, I was able to quickly determine that I had a dead battery, replace it, and get to testing the Arccos with a full compliment  of sensors in my bag. Not only was the problem handled courteously and quickly, but Arccos also sent me a nice ball cap and a pack of replacement batteries to make up for the expense and trouble of having to buy my own (the whole kit comes with batteries included). Totally classy. And it gives me full confidence in the brand that if I ever had other or more serious problems, Arccos would make it right.

How Arccos Golf Works
The whole Arccos golf kit works seamlessly. The sensors pair just once with your phone and then transmit data wirelessly. The sensors know when you’re taking a practise swing, and when you’re hitting. You never need to tell them you’re hitting a club, or that you’ve switched holes, they just know. That was impressive.
Also good to know is that all the sensors stayed put during the constant in and out of the golf bag during my tests. 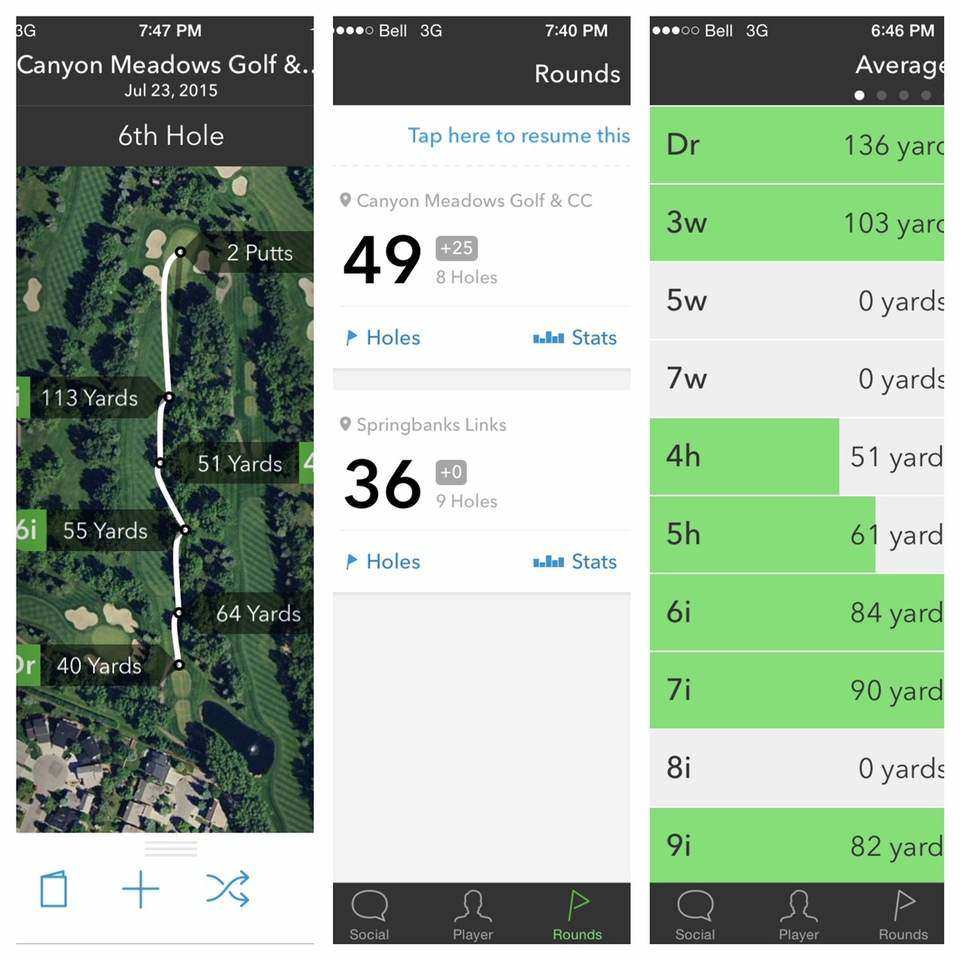 What You Can Learn
Arccos Golf tracks a wide variety of stats, and can give you a lot of information about your game. You can use your fingertips on the satellite maps of each hole to determine distance to the pin, to an obstacle, or to a midway point on the fairway.

~shot distance with each club, and keeps a running total of your best and average distances with each club
~club usage. Arccos can tell you definitively which of your clubs you’re using most often
~handicap, as well as the handicap breakdown for driving, chipping and putting
~scoring indicators like total birdies, bogeys, pars, etc.
~where your ball tends to hit the fairway or the green (left, right, misses)
~putting stats, like number of putts per hole, or putts after green in regulation (GIR)

So why might you need all this data? According to Arccos, you’ll be “uncovering your strengths and trends,” and getting “game-changing knowledge to make smarter decisions on the course.”
It’s worth noting that Arccos will give you a lot of stats and numbers, and in my opinion, it might be a lot of info for a novice golfer. Similarly, while you can look back at your round and see where your ball ended up on each hole, the Arccos alone won’t help you correct that slice; it’ll just confirm you have one. Arccos could probably be most valuable for a golf pro, a very serious regular golfer who already has good insight into their troubles and just wants to track issues, or for someone who’s working on refining some well-honed skills.

Testing the Arccos
I was able to test the Arccos twice in two rounds of golf at two different courses. While the putting was not factored into my first round due to the battery failure, it still kept track of all my other shots, mapped where my shots went for each hole, and scored my round.

The second round of golf I played, I had all the sensors working, but mysteriously Hole #2 didn’t score at all; none of my shots were recorded. The sensors seemed to kick back in on #3, so while my overall game stats were skewed again, everything else seemed to work fine. My feeling about this is that I must have done something wrong, or there was some kind of glitch with one of the hits that somehow blanked out those few shots. I’ll follow up with Arccos again out of curiosity to see what went wrong, and post any updates when I get them. Despite those two glitches I found it really fun to see a map of exactly where all my shots went, to have data for all my clubs, and to see that despite being pretty hard on myself, I’m actually a much better and straighter shooter than I give myself credit for. 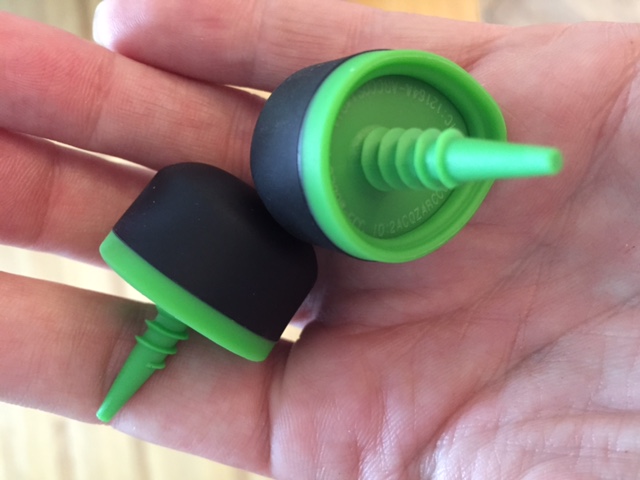 As far as other notes, the batteries have indicators so you know when they’re dying, but are supposed to last about 50 rounds, and Arccos’ software says it has scoring and data for golfing every course in the USA. While I don’t have the Canadian stats, it worked at both courses I went to; private and public. Again, I’ll update that info when I get it.

I’ve been using the free Off Course Golf app to keep score and track my stats up to now. While I use it religiously to keep score and for GPS, the data is must be entered manually. The Arccos, on the other hand, tracks each shot and takes note of each hole automatically, so I never needed to fuss with a pencil and score card, or my phone, unless I wanted to access Arccos’ GPS data. In fact, this was probably the best feature of all for me with the Arccos. I’m notoriously bad at keeping count of my shots, so having the Arccos do it for me was a whole new level of easy. At the end of the round, I’d pull my phone out to see my score, and check my distances, trajectories, and putt count.

I really liked Arccos Golf Sensors in my limited testing. I found it easy to use, intuitive, and was pleased with the data I was getting. While I think the price makes it a more “special occasion” golf purchase, rather than something all the everyday golfers will pick up for themselves, I think there’s probably a lot to be gained from the stats for the more serious duffer, or golf student.
My recommendation?  Put the  Arccos Golf Sensor on your Christmas list if you really like golf!

Erin is a journalist, writer, and TV producer with a fascination for technology and a love of gadgets. Watch her on Tech Talk, monthly on CTV Morning Live Calgary, read her blog at ERINLYYC  or chat via Twitter “@ErinLYYC”