Best Buy Blog
Home Musical Instruments Choose the Right Guitar for the Beginner and Intermediate Player in Your...

Deciding to play guitar is an incredibly exciting time as your daydreams fill with those moments on a stage in front of thousands of adoring fans cheering for you. When it actually comes time to go into a store and buy your first guitar, it can be a daunting experience for the hopeful new guitarist. This blog will help you with some of the things you should consider and be aware of to make this awesome journey as rewarding as possible.

I was lucky in a couple of different ways. Perhaps the most important was that my father loved music. We had hundreds of LPs, cassettes, and even some 8-tracks when I was growing up, and even though I was rarely allowed to touch them, I was fortunate to come of age in the beautiful world of music. By the time I was 10 years old, I was already familiar with the Beatles and Bob Dylan, as well as the entirety of the 1950s music catalog. It was also around that time that my dad decided he was going to teach himself to play guitar. He went out and bought a “How to Play Guitar” book and a nylon string classical guitar. Unfortunately for him, it never took. Fortunately for me, it did.

I vividly remember that one of the other kids in my grade 7 class brought a guitar to school and played it during recess. I thought it was most likely the coolest thing I had ever seen, and when I realized that the girls all thought so too, I knew that I had a new passion. I picked up the now abandoned classical guitar and started to bash around on it (and may have also given up on it were it not for the fact that in grade 8 I could take a guitar class). I did, and within weeks I was playing songs. Actual real songs.

My one regret is that I never took any lessons after that, and I feel that my weakness on guitar, among other things, is not having a strong theoretical foundation in music. I know what sounds good to me and what I like to play, but as much as I try to learn music theory now, I always feel a bit behind. The one thing I try and do to overcome this limitation is my first piece of advice for any young guitar player. ASK QUESTIONS! (Yes, it is bolded again because it really is that important). If there is one thing that seasoned guitar players like to do, it is talk about guitars. If you know people who already play, get their opinions on guitars, or strings, or amps, or… how to hold a pick, or how they practice. While I know we all wish we could be Jimi Hendrix the moment we pick up a guitar, the only way you even have a chance of coming close to that level of talent is through sheer dedication and practice. But first, you need to get a guitar.

My first electric guitar was a gift from my parents. It was a Kay electric guitar in a hideous sunburst purchased from Zellers in Prince George. They didn’t get me an amp, but fortunately we had a family friend that gave me a tiny old Fender amp, so that at the very least, I could play. I never could make that setup sound “metal” no matter how hard I tried, but it did allow me to satiate the hunger I had for making noise. I absolutely loved that guitar, but boy was it hard to play.

If I wasn’t all in on the guitar thing at this point, I may have just thrown in the towel, but fortunately, I didn’t.

Now, what do I mean by “hard to play”? One of the major considerations for a guitar player of almost every level is “action”. Action refers to how far the strings sit above the fretboard. There is this sweet spot where the strings are very close to the fretboard, and thus easy to depress with your fretting fingers, yet don’t produce a buzzing sound where the string vibrates against a fret wire when you strum or pick a string. A nice low action makes the guitar infinitely easier to play, which is crucial when you are first beginning, as it helps to alleviate some of the inevitable frustrations. If you pick up a guitar for the first time and try to strum a chord and feel like your fingers are working harder than they should to get the strings to the fretboard, then put that guitar back and try another.

You need to have an axe that makes you want to pick it up and play it, not one that makes you think twice because it’s killing your fingers. Your fingers will invariably hurt just from doing something they aren’t used to doing, so no need to amplify it with bad action. OK, so action is important, but what kind of guitar do you want? What kind of guitar do you need? This is where you have to decide a few things before you buy.

How To Decide Between Electric or Acoustic

What is your ultimate goal? Do you want to be in a rock/metal/punk/ska band? Do you want to play songs around a campfire while people sing along? Obviously, these are two totally different goals, and each has its own requirements from a guitar, so let’s start with the latter. An acoustic guitar can have steel strings like an electric, or you can get a classical acoustic with nylon strings. The nylon strings of the classical acoustic may be easier on your fingers at the beginning, but you are a bit more limited in what you can ultimately play. I will say, however, that anyone that can play a classical guitar well can make these guitars sound absolutely amazing as they do possess such a warm and comforting tone. If you’re saying to yourself right now “pppffft, classical guitar? I want to shred!”, go to YouTube and check out just how shred-worthy some classical guitarists are. You don’t truly know shred until you’ve seen Paganini played with finger picked sweep arpeggios on a nylon string guitar. An acoustic guitar with steel strings is likely what you are more familiar with as it covers the musical gamut from blues to rock and everything in between.

A steel string acoustic guitar usually has a smaller neck (not as wide or as thick) than its nylon counterpart, and that makes it generally easier to learn on. The steel strings also make it a bit louder, as well as crisper and brighter sounding, so it would be the guitar of choice for those camping sing-alongs. Another bonus is you don’t need to buy an amplifier (although you can get electric acoustic guitars as well—it is simply a steel string acoustic with a pickup in the body), so it really is simplicity at its best.

Most guitarists will own several guitars, and at least one of them will invariably be an acoustic guitar, as they are really easy to just pick up and play without the hassles or worries of amps and effects or bothering neighbours. Just sitting and doodling or writing your next hit comes very easily with a nice acoustic guitar. Of course, if money is an issue and you can’t possibly get both an acoustic and an electric at this point, then my advice is to get what you really want! The more invested you are in your purchase, the more likely you are to sit and play, and that leads to nothing but good things.

So, you want an electric guitar? Great choice! There are few things, in my mind at least, as chillingly electrifying as hitting a power chord and hearing it rumble out of your amplifier. Sure, you can pick up an electric and start playing it; you can even generally hear it as the strings are still vibrating; but without the soundhole of an acoustic (or being plugged into an amplifier), that is the best you will get. Any noise will easily drown out your unplugged electric. So, if you are wanting an electric, then you will need some form of amplification to get it to do what it was made to do. That, of course, being to RAWK! So if what you want to produce (sound wise) comes from an acoustic guitar, like the incredible songs from a band like Neutral Milk Hotel, then you want an acoustic guitar. If you see yourself as the next Dave Mustaine or Dimebag Darrell, then you definitely need an electric one!

There are also accessories that you need with your guitar, and this is where something like a “starter pack” can come in handy (as it provides you with a guitar and everything that you need to make it work in one nicely priced bundle). For a new budget-minded guitarist, the Fender Squier Series Stratocaster pack comes with a guitar, amplifier, strap, gig bag, spare strings, and the oh-so-important tuner. The gig bag really only protects the guitar from scratches, so if you plan on travelling in any significant way with it, you should upgrade to a hard-shell guitar case

For slightly more money than the complete starter package (but with only the guitar), you can make a significant upgrade to something like an Epiphone guitar, which is made by Gibson. The Epiphone Les Paul in Vintage Sunburst is an exceptional value at that price point.

But no matter what you are looking for, always try several different versions and brands, and no matter how cool it looks (or how little it may cost), if it doesn’t feel comfortable—for whatever reason, then keep on looking, because at the end of the day, your comfort will lead you to want to play, and that is always a good thing. So best of luck, happy shopping at Best Buy, and I truly hope to see you on a stage somewhere soon! 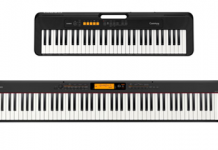 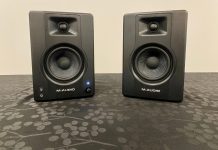 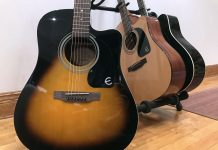