What Is a Power Surge?

Have you ever seen the lights flicker in your house? That’s one sign of a power surge. This happens when something disrupts the electrical distribution system, causing a brief voltage fluctuation as the electricity enters your home. A power surge can be caused by anything from a squirrel damaging a power line to a local factory powering on heavy equipment. A nearby lightning strike can also cause a power surge. While it might only last a fraction of a second, a power surge can range from 500 volts to upwards of 1,000 volts and wreak havoc with delicate electronics, which are designed to operate at 120 volts.

So you need to make sure your computer is not directly on the receiving end.

Use a Surge Protector to Protect Your PC

A surge protector does exactly what the name suggests: protect equipment from power surges.

Some surge protectors also offer telephone line and cable inputs, because as if power spikes in the electrical system weren’t bad enough, power surges from close by lightning strikes can also travel through those wires as well. What to Look For in a Surge Protector

Utility providers and insurance companies often post guidelines on surge protectors (after all, if your computer gets taken out by a voltage spike there’s a good chance you’ll be calling them to complain). I’ve taken the liberty of grabbing the main points from several of these publications:

When talking surge protectors for computers, it’s well worth considering taking the next logical step and using a UPS (Uninterruptible Power Supply) with built-in surge protection. These devices take protection to the next level, protecting from power surges but also providing battery backup so your computer doesn’t suddenly shut down in a blackout situation. The extra minutes of power the UPS provides means the PC can be shut down properly so you don’t face the risk of damaged components, lost work or corrupt files.

I highly recommend the upgrade to a UPS—for a little more money, you get a lot more peace of mind.

Surge Protectors Wear Out Over Time

It’s important to note that surge protectors don’t last forever. Power spikes happen more frequently than you realize and there are times when they happen repeatedly—during a series of thunderstorms or when there’s construction in the neighbourhood, for example. And over time, even little surges cause cumulative damage to a surge protector. That’s okay, because a surge protector is inexpensive and lot less expensive to replace than your computer. However, you should watch for signs that your surge protector has seen better days and replace it when in doubt. 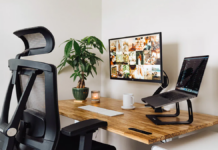 Gifts for someone with a home office