Pets are one of the best parts of life. We think of them as a huge part of our family, so it can be stressful having to leave them behind when we go to work or away for the day. While cats often do well on their own, dogs can have separation anxiety or feel lonely when left for extended periods of time.
Thanks to the latest smart home pet devices, you can check-in and see how your pet is doing when you’re not home. With two cats and two dogs at home, I was happy to test out the Dogness iPet Smart Robot Treat Dispenser. It’s a small, cute robot you can control via the Dogness app. I loved how I could maneuver it around the house to locate my pet, check-in, and dispense treats. It gave me peace of mind knowing my pets were doing well, and I hope it made them feel better about being alone.
Here’s a look at the Dogness iPet Smart Robot Treat Dispenser, how it works, and how it can help your pet feel comfortable at home when you aren’t there.

The Dogness iPet Smart Robot Treat Dispenser is a small, plastic robot that weighs approximately 6 pounds. It has a camera built into the head of the robot, and underneath the camera is a treat dispenser. You place the treats inside the robot, and it’s easy to open and close so you can refill when needed. As the dispenser is small, it only fits small treats.

How to set up Dogness iPet Smart Robot

To start using the Dogness iPet Smart Robot, all you’ll have to do is unpack the robot from the box, plug it in so it will be fully charged, and connect it via the Dogness app to your home’s Wi-Fi network. It will only work on a 2.4GHz connection, so if your default Wi-Fi is 5GHz or you have a dual-band router, you’ll want to make sure you connect to your 2.4GHz network.

The Dogness iPet Smart Robot will only work with the Dogness app, and it must be connected to Wi-Fi in order to function. I found the best option for using this robot is to connect to a mesh Wi-Fi network. That way the robot can move freely throughout your house, randomly accessing Wi-Fi points, and continue to operate without delay.

I have cats and dogs; two cats named Simba and Newton, one border collie named Blue, and one Great Pyrenees named Rosie. After using the Dogness iPet Smart Robot for a week or two, I’ve found the cats are the biggest fans. Rosie, our 130-pound puppy, is absolutely terrified of Dogness, but it’s made for some entertaining interactions because of it.

After I set up Dogness iPet Smart Robot I spent some time setting up the app. There are quite a few options available within the app, and you’ll have a lot of fun using them.

Using the app to move the robot

While treat dispensers and pet cameras are available, you have to wait until your pet cruises by the camera or dispenser to see them. With the Dogness iPet Smart Robot, you don’t have to wait; you can just move your robot around the room until you find your pet.

I found the controls easy to use, and moving the robot is a lot like moving a remote control vehicle around. The controls are very responsive. I didn’t find there was a delay between when I touched them and the robot moved, and Dogness also has rubber wheels so it can move easily across the floor or the carpet.

Cat and dog sounds in the app

There are two different ways you can call to your pet when you’re moving the Dogness around your house. There is two-way audio that’s crisp and clear, so you can just tap the microphone to listen or talk. You can also use the built-in dog and cat sounds.

The sounds included are for dogs and cats and are labeled by emotion. They include relaxed, angry, sad, and happy. I found my cats responded to the relaxed sound more often than not, and the angry barking made my dogs go crazy. Instead of running toward the robot, they took off outside and ran to look for the other dog.

One of the funny things about the noises is how a few of them sound so human-like. The barking dog sound I included in my video sounds a lot like I do when I’m playing with my dogs and barking at them to rile them up.

After rolling around my house for a while, looking for cats and using the cat sounds to call them, I found my cat Simba watching the robot from a quiet corner. He’s used to robot vacuum cleaners so he wasn’t afraid of the Dogness, but he also didn’t run up to it and interact with it when I made sounds or used the two-way talk.

What Simba did respond to were treats and lots of them. The Dogness fits small treats that are the perfect size for cats. I tapped the Bone icon in the app and the treats started popping out. They eject fairly quickly, although it took a few taps to get the treat dispenser working.

Simba loves treats more than anything, and once he discovered that the robot had treats inside of it, he had found a new best friend. He sat purring beside the robot, even when it wasn’t moving, and he even groomed it a bit in what I assume was an attempt to get it to dispense more delicious treats.

Simba isn’t as playful as some cats, so while he watched the laser pointer move around the room, he wasn’t overly interested. I’ve seen footage of dogs and cats going crazy for the laser pointer on pet cameras, so I know it will work for other pets. It’s a good way to get them up and moving around if you’re gone all day.

To try the treat dispenser with dogs I rolled up to my dog Blue, stopped in front of him, and dispensed treats. Blue loves treats as much as the next dog, but he was very skeptical about the small robot sitting in front of him. I used two-way talk and then dispensed more treats, but he got up and walked away. I tried to lure him back with the laser pointer but he wasn’t interested either. With Rosie, I couldn’t even roll up to her. She would get up and walk away as soon as I tapped the controls.

I think for a smaller, indoor dog it would work great, and Simba really loves the robot so it’s a great tool to use to check in on your cats.

You can view your camera live whenever you log in to the Dogness app, and you can save clips to your phone or tablet’s photos if you’d like to. Just tap the video icon and your camera will begin recording, and you can just tap to take a photo.

It’s a Full HD camera and it has night vision so you can still see in dark conditions. I found the footage was a bit choppy upon viewing. It was very clear, but there was a short delay when the Dogness was moving around and recording at the same time.

The robot should last in stand-by for 20 days, and it takes about 2 hours to get a full charge. I occasionally had trouble waking up the robot, but it was ready to go when it did wake up.

I didn’t spend a lot of time driving it around the house because the cats were always near-by, but the battery did drain quite a bit after 4 days of turning it off and on all day. I also shot video, dispensed treats, and used the animal sounds, so that can contribute to a drop in battery life.

Should you buy the Dogness iPet Smart Robot?

Out of all of the pet cameras I’ve tried, the Dogness iPet Smart Robot is definitely the most interactive. I love how you can go and look for your pets and not have to wait for your pet to come to you. The included sounds are useful for getting your pets to come to the robot, and the two-way audio works well without lag or delay.

While my dogs weren’t as receptive to the Dogness as my cats, I think a small dog that’s indoors all day would enjoy having the robot around. It’s not going to be a replacement for human company, but it’s a good way to check-in, talk to your pets, and give them a treat for being a good boy or girl.

We all love our fur babies and we worry about them during the day or at night when we aren’t home. With the Dogness iPet Smart Robot, you can interact with your pets, soothe them with your voice, and know they are OK when you’re not there. That’s a win in my book, and you’ll love the peace of mind it provides.

Check out the Dogness iPet Smart Robot on Best Buy right now, and be sure to take a look at my review of another Dogness product: the Dogness Smart Cam Pet Feeder. 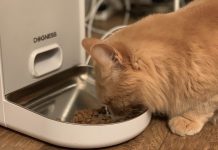 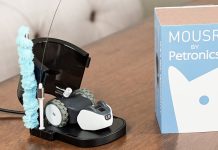 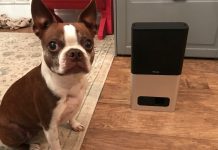