It didn’t occur to me until my early 20s that fancy corkscrews existed. Or, rather, I knew that they existed, but until I tried out Peugeot’s Salma and Baltaz corkscrew, I had no idea that they could actually be cool.

There’s a point in your life when you finally start needing a corkscrew in the kitchen. It happens just after you start college or university, and probably around the time you start throwing parties of 10 people or less. And, the food is more than just a bowl full of family sized chips. Your tastes in wine begin to shift away from the $7 bottle of “white blend” with the twist-off cap, and slowly, corked wines are introduced.

You don’t even need to have a taste for wine to own a corkscrew—although it definitely helps justify buying a nice one. Instead, you just need a will to share, and dinner party attendees who might enjoy finishing off the bottle of Burgundy that you just opened for your coq au vin.

A great corkscrew serves as a conversation piece on your trendy, metallic-finish bar cart (I’m sorry, is it not the ’60s again?), but a great one takes the hassle out of opening a bottle of wine. Pair your corkscrew with a decanter to aerate your bottle of wine and get ready to start the night off without a hitch. A simple Peugeot corkscrew: The Salma

If Peugeot knows how to do anything, it’s how to make their corkscrews clever. Much like their handy U-Select option in their salt and pepper mills, these corkscrews offer more than just your basic tool. They’re far pricier than something you’d pick up at the liquor store, but—and I don’t say this lightly—they might just be so well-designed that it’s worth it.

Take the Peugeot Salma Corkscrew, for instance. It’s simple, right? Just a regular Peugeot corkscrew that’s been stretched out until it’s jumbo-sized that they went and slapped a higher price tag on. How the Peugeot Salma works

The Salma is the most simple Peugeot corkscrew design that Best Buy carries, but even it is deceptively simple. You don’t twist this corkscrew and then yank upwards while hoping that the cork will dislodge itself. Instead, you remove the foil on the bottle with the tucked-away, detachable, foil-cutting base. Then, you fit the plastic positioner over the mouth of your bottle—no guessing about where the centre of the cork is, and no risk severing it in half. Finally, you grip the solid metal handle, and you turn.

When you’re done, you just un-twist the cork, remembering that it’ll slide right off of that non-stick spiral. The handle and corkscrew slide back into the positioner, and the foil cutter tucks back into the base for easy, upright storage. There are no loose parts left over, and while it takes up more space in your kitchen than a simple, folding corkscrew, it gets the job done with a heck of a lot more class. The first thing that I thought when I looked at the Peugeot Baltaz Dark Lever-Style Corkscrew was: “wow, I have no idea how that works.”

Well, technically, that was the second thing. The first was more along the lines of “wow, that is one super weird-looking object. Is it masquerading as an organ? Was it modelled off of someone’s anatomy?

Not all Peugeot corkscrews are strange, but this one is. It’s so strange, in fact, that it warranted its own video on the Best Buy product page. The Baltaz tackles the concept of a lever corkscrew, which, while many options are available for purchase, still isn’t all that popular. And it does it with a certain degree of aplomb.

This Peugeot corkscrew is lightweight but sturdy, with a plastic design that features a cast-metal handle. Its movements are smooth, and—here’s what I really love about it—its handles are ergonomic and easy to handle. It doesn’t just take all of the thought out of opening a wine bottle; it takes all of the pressure points out of it, too.

Opening a bottle of wine is a tough enough feat on its own. Add in arthritic joints and you have a serious struggle brewing! A good, lever-style wine bottle opener like this one dispatches with those woes entirely. Peugeot calls the Baltaz’s actions a “smooth and gentle uncorking,” and honestly? They’re not wrong. How the Peugeot Baltaz works

Much like the Salma, the Peugeot Baltaz corkscrew is ergonomically designed with an included foil cutter. (This one isn’t attached and hidden on the piece.) Using it is overwhelming at first, especially because it doesn’t come with instructions, but it’s intuitive as soon as you see it happen just once.

First, twist the foil cutter around to remove foil as necessary. Then, settle the Baltaz around the neck of your bottle. It can take it: the flexible arms open to accommodate any bottle size.

Once you’re in position, squeeze the arms together for a secure grip and pull the lever-arm forward to sink the corkscrew into your cork. To remove, simply pull the lever back—which should happen with no resistance. When I tried this out for the first time, I was in total awe of how effortless the Baltaz made this process; it slid right out with a motion that I really would describe as “gentle.”

What I learned from watching Best Buy’s uncorking video is that the Baltaz will then do one more thing for you. Remove it from the bottle and close the arms again, then pull the lever forward once more. The cork will twist itself off. I don’t know how it works, and I don’t want to look closely enough to ruin the magic; all I need to know is that it does work (and the fact that it does is super cool). 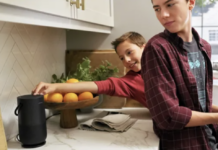 Teach your teens well: life skills in the kitchen 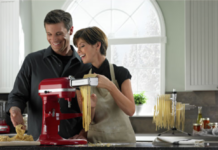