As a style & travel blogger here at Best Buy, I try a lot of luggage. Like: a lot of it. I go through more luggage in a year than most people will go through in a lifetime, so I really appreciate it when a brand shows me right off the bat that they’re offering something a step above, like Swiss Gear did with their line of Swiss Gear Souvenir IV pieces.

What makes the Souvenir IV set different is that it’s not just called the “Souvenir IV.” It really is the fourth version of the same set of luggage. Furthermore, with the Swiss Gear Souvenir IV, you know you’re getting something improved. This isn’t a new luggage design that a small company is testing out. It’s a flagship product from an iconic brand, and it’s been tweaked over the years to incorporate better technologies, more modern designs … The whole nine yards.

How does the Swiss Gear Souvenir IV compare to the Souvenir II?

The SWISSGEAR Souvenir IV 3-Piece Soft Side 4-Wheeled Expandable Luggage Set in Black/Blue is the newest Swiss Gear Souvenir set, but it’s not the only one that Best Buy carries. The online store also stocks the Swiss Gear Souvenir II, which gets 4 stars out of 5 from customer reviews.

So how do the sets stack up? Both Souvenir sets feature 360-degree wheels. Both have retractable handles. So too do they feature pieces in your standard 28″, 24″, and 20″. All of the main features that made the Swiss Gear Souvenir II sell so well have been maintained, from side carry handles on the 24″ and 28″ pieces to the inclusion of interior tie-down straps and an interior flap pocket for loose items, documents, and old theatre tickets.

(I’m sorry, was that flap not intended to be a home for miscellaneous tourist refuse? Because that’s what it always becomes when I travel.)

The new design has been updated for a more modern look, using colour as an accent instead of a main feature. The zippers are an electric blue, while the bright blue interior lining and extendable handle of the Souvenir II have returned to grey and black in the IV.

My favourite parts of the Swiss Gear Souvenir IV update

As a staunch advocate for hard-sided luggage, I was surprised by how much I liked the Swiss Gear Souvenir IV line. The aesthetic of the range is sleeker than most soft side luggage sets, with attractive curves and bountiful pockets. Instead of following your standard top-bottom pocket design, the pockets of the Souvenir IV range are layered. The smaller front pocket begins lower than the mid-size pocket, but it runs the length of the front flap.

That means that, for once, your front pockets are actually useful. I’d never be daring enough to store my tech in a piece of luggage, but the long pockets give you plenty of space to do so, if you wish. Instead of fitting socks, bobby pins, and pretty much nothing else, these pockets are for storing things like full-size folders and workbooks. You could even toss all of your last-minute essentials in the smaller pocket as you pack up in the morning.

(You know: toothbrush, face wash, an extra sweater, and a snack for the long line at customs.) I also really liked Swiss Gear’s inclusion of a nametag on these pieces. I know you’re supposed to tag your items with your contact information at the airport, but those tags are, frankly, pretty pathetic. (Seriously? The only thing identifying my luggage as mine, before it gets added to the system, is an inch-wide piece of paper attached with tape?) It’s a trend that I think is slowly going out of style as luggage gets more and more minimalistic, but having an extra, non-removable tag delivers an extra piece of mind while travelling.

Finally, the handles of the Souvenir IV were my last pleasant surprise. The top and side carry handles are semi-rigid, so they’re always easy to grab, and they’re sculpted for a better grip. It’s worth noting that they aren’t padded (something to update in the Souvenir V, perhaps?), but the design makes up for it with a discreet bottom-carry handle. The bottom-carry handle is impeccably discreet. It’s simply a very secure flap that you can get a handhold in if needed, but it lies flat enough that you won’t end up with snow or mud inside the flap itself. How the Swiss Gear Souvenir IV stacks up

There are plenty of luggage reviews on the Best Buy Plug-in Blog, so I’ll save you a bit of time. I’ve compared the Souvenir IV to the Souvenir II, but what about Best Buy’s other luggage offerings?

The Souvenir IV’s strongest points are its functionality and aesthetic. Its pockets are well thought-out, and each piece looks extremely sleek. (Yes, even as soft sided luggage!) The electric blue piping used in the design set the Souvenir IV apart from every other piece of black luggage out there, and it’s reinforced at the corners for extra durability. However, the Souvenir IV isn’t the only great soft side luggage set available at Best Buy. The Swiss Gear Zernez range, for instance, offers brighter colours and really comfortable padded handles. (I’m heartbroken that Swiss Gear couldn’t have just made the Souvenir IV with the Zernez’ handles!) My only caveat is that, while the Souvenir IV is my pick for aesthetics, the Zernez line looks a lot more dated.

Well, and its pockets aren’t full-length. I still can’t get over the narrow, top pocket on classic soft side luggage sets. What is that pocket for? You can’t take that luggage on the plane with you, so it’s not for electronics. I’m thinking socks, maybe? I usually end up using it for socks.

Whether you’re going on a month-long expedition or a weekend getaway, the Swiss Gear Souvenir IV 3-Piece Soft Side 4-Wheeled Expandable Luggage Set is an excellent pick for soft sided luggage. It’s stylish, professional, and durable, with great pockets and an even better “look”. Do yourself a favour and get it in blue. 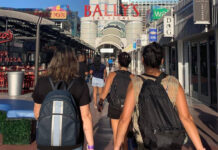 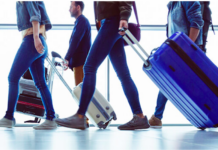 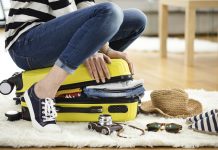