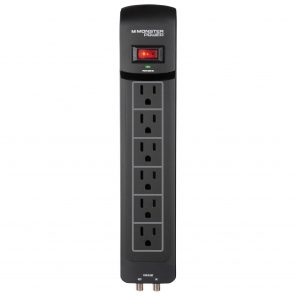 Would you drive your car without insurance? Would you take a pass on insuring your home’s valuables in the event of a break in or fire? If you would, you can skip this article! But for the rest of us for whom having a safety net is important, read on.

Many large electronics devices are expensive, and losing one to something as preventable as a power surge or a fire could cost you big. That’s why it’s a smart idea to consider investing in some power and surge protection for your big ticket purchases.

You probably think it can’t happen to you, because you’re not sure what a power surge is, precisely. I know that was me up until I started doing research for this article. Turns out they can be a lot more common than we think.

To quote Direct Energy corporation, “surges can be caused by a number of factors. There could be a lightning strike nearby, your utility company may be switching from one distribution system to another, or an animal like a squirrel or raccoon could damage a power line causing a surge. In some cases, if your house is near a large factory and you share the same transformer or electrical system, something as simple as powering heavy machinery on or off could cause a surge.”

So, many things that are completely out of my control could cause a power surge. But what might be the result? Back to Direct Energy for the expertise:

“A power surge can enter the home, fry out the circuit breaker and spread to the various outlets in the house. If an appliance is plugged directly into the structure’s electrical system, the appliance may not survive the sudden surge of electricity.”

There’s the rub. A surge can fry the innards of your appliances, and with particularly sensitive devices like electronics, the damage can be severe. So what to do about it? We’ve picked out 4 gadgets that can help. 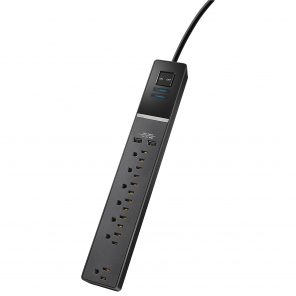 The key to preventing a surge from hitting your devices is to stop it from getting to them. This large power bar from Rocketfish can accept up to nine devices; seven AC plugs and two USB devices.

Joules? How do they work?

With a 2100 joule rating it can absorb a large amount of energy to keep your electronics safe from power surges. What are the joule ratings all about? To keep things simple, this number measures the energy absorption and dissipation properties, and the higher the number, the better protection you have.

Similarly, the Monster PowerCenter 600 Surge Protector safeguards your electronics from harmful power surges and voltage spikes with 1080 joules of protection in this 6-outlet power centre.

It also reduces the electromagnetic noise and unbalanced AC power that can compromise audio and video performance. This surge protector is ideal for optimizing your home theatre components, computer equipment, appliances and other electronics. Plus if anything does go wrong, Monster has you covered with a $100,000 equipment warranty if your stuff somehow gets fried while connected to the device. 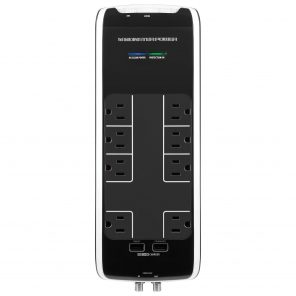 If you need still more outlets, there’s the Monster PowerCenter 800 surge protector, which gives you eight outlets and 1440 joules of protection from surged power. There’s also a handy power/on indicator so you can be sure the device is turned on and working. This version also offers double the warranty protection ($200,000) in case of damage.

Monster Power Platinum 800 HT surge protector
For a superior level of protection, the Monster Power Platinum 800 HT surge protector may be the one to choose. With a 1620 joule rating offers a high amount of energy absorption in order to adequately protect your equipment as well as prolong its life. Eight standard three prong outlets give you plenty of safe spaces to plug in your electronics and an additional two 3.4A USB ports let you charge your mobile devices too. Plus a long 6-foot cord gives you lots of flexibility, even if you don’t have outlets as close as you’d like.

Don’t get caught with fried electronics just because a squirrel decided to take a bite of your power cables. Make sure you’re protected from power bumps, jolts and surges with power protection from Monster and Rocketfish.