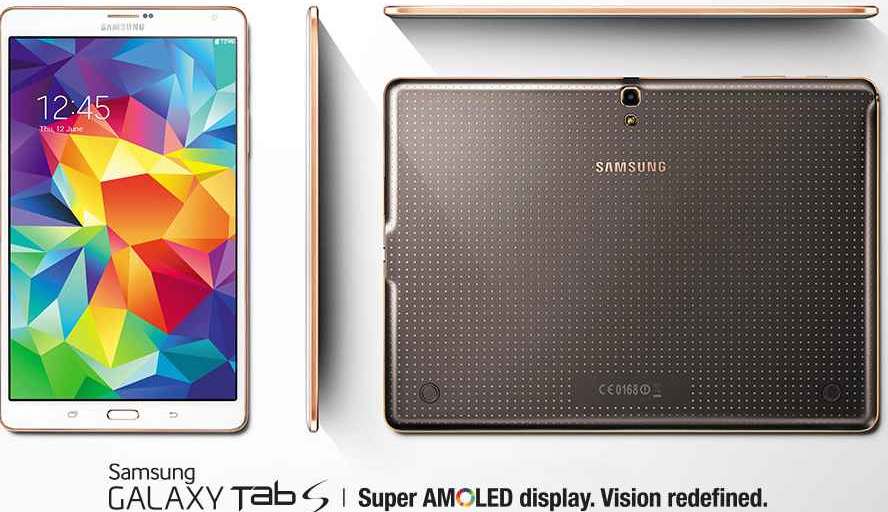 Two of the factors driving the premium tablet market today are thinness and display quality. A thinner tablet not only looks sleeker, it’s lighter than others in its class making it easier to hold and to carry. Display quality is a no-brainer (who doesn’t want a better display?) but to this point, most of the competition has been in pixel count. Samsung has been a leader on both fronts but at a recent media event, the company introduced its thinnest tablet ever, the Galaxy Tab S. Besides its credentials as the sveltest tablet out there (yes, it’s even thinner than anything coming out of Cupertino), Samsung has seriously upped the visual ante by incorporating a Super AMOLED display. Pre-order yours today!

As the new kid on the flagship tablet block, the Galaxy Tab S looks the part too. Available as an 8.4-inch or 10.5-inch tablet, both sizes are offered in Titanium Bronze or Dazzling White, both trimmed with gold-tinted bezels. The 6 mm thickness makes the Galaxy Tab S the thinnest tablet Samsung has ever released and you’d be hard-pressed to find another tablet out there —from any manufacturer, running any operating system— that matches it for sleekness.

There are variations between the 8.4-inch model and the 10.5-inch version (the display’s physical size, device weight and overall dimensions being the primary ones), but both new Galaxy Tab S models share several key specifications that make these tablets stand out from the crowd.

About That Super AMOLED Display (i.e., the “Revolutionary Visual Experience”)

Being thin is great. Looking the part is great. An octa-core processor with 3GB of RAM at its disposal is great. Having features like fingerprint swiping security, the ability to multi-task with multiple apps running in their own window and a dedicated Kids Mode are all great. But it’s the display that really makes the Galaxy Tab S such a revolutionary step forward for tablets. 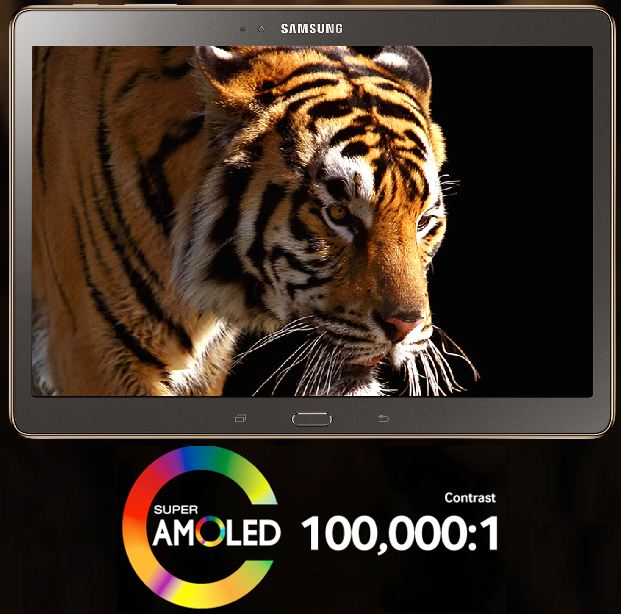 Like the recent Galaxy PRO line of tablets, both Galaxy Tab S models boast a 2560 x 1600 display that offers extremely crisp graphics and text. However, instead of the LCD displays typically used in tablets, Samsung has incorporated a Super AMOLED display in the Galaxy Tab S.

The results are stunning. Colour accuracy is rated at 97% (most tablets manage 74%) and the contrast ratio of 100,000:1 is 100 times greater than typical tablet displays. Combined with the WXGA resolution’s 4 million + pixels (double the count of 1080p Full HD), the Galaxy Tab S display offers unparalleled colour reproduction with deep blacks, bright whites and razor sharpness.

It’s also an adaptive display, which means the screen is optimized (sharpness, contrast and colour gamut) for different activities such as reading e-books, watching movies or editing photos.