Finding a printer that lasts is mainly about the ink and how long that lasts, which is where the Epson EcoTank ET-3710 tends to excel the most.

When Epson launched its EcoTank printers a few years ago, it changed the concept of ink availability. Rather than using inkjet cartridges, the printers utilized ink bottles to fill up small tanks. The collective amount of ink was like having several cartridges at once, which is why Epson projected output in both number of pages and in years.

The ET-3710 continues that mantra as yet another all-in-one printer that also has a built-in scanner and copier. But it’s also what Epson calls a “supertank” printer for the sheer size of the tanks themselves. Epson reckons they amount to the equivalent of about 80 ink cartridges. That would mean the printer can output approximately 7,500 black pages (6,000 colour) before you need to refill them.

There isn’t anything particularly dramatic about the ET-3710’s design. It looks like an all-in-one printer has looked for years. The lighter colour is a nice departure from the usual black finishes in this category. It’s also relatively slim in stature, though its depth and height will necessitate you putting it in a more open space.

The whole front panel housing the 2.4-inch screen and keypad tilts, making it easier to view all the controls from a higher vantage point. No need to hunch over the printer when standing up that way. The screen isn’t touch-sensitive, so the directional pad handles navigating the printer software’s interface.

Up to 150 plain pages can fit in the paper tray at the bottom, and the output tray just above it is elevated to allow paper to dry quickly on both sides. Connectivity ports are limited to Ethernet and USB, in case you want a wired setup. Don’t expect to be up and running within 10 minutes with this printer. The entire process is upwards of 45 minutes, or even an hour, when factoring in everything from the unboxing to being ready to print.

After taking off all the protective stickers, I filled up each of the ink tanks individually, which is easier to do now than it used to be with Epson’s EcoTank models. The bottle tips align perfectly with the tank’s slot. With each bottle, I had a little ink left over, so the size of each bottle isn’t precise to that of each tank.

With that done, I then had to download and install Epson’s software and drivers to my Mac (the process is the same for Windows PCs). Once that was done, it walked me through setting it up on my Wi-Fi network (Ethernet was also an option). It must be a 2.4GHz network, by the way, so if you’re wondering why it won’t connect to any network running on the 5GHz band, it’s because it can’t.

After that, I used the printer’s own screen to align the print heads and output the test pages to get it ready. There were five in total, each of which had to be confirmed to be accurate by pressing corresponding buttons on the display.

Only then was I able to start printing. What I described may appear convoluted, but it’s often how printers start out. Epson’s EcoTank models have been a little more intricate in that regard, from my experience. There are additional features and integrations with cloud-based services, like Google’s Cloud Print or Apple’s AirPrint. But it goes further by including Dropbox, Box, OneDrive, Evernote and Google Drive, particularly when it comes to scanning documents and saving them. Documents can go straight to a cloud service via direct upload or through an email address associated with the printer.

Epson’s Remote Printing works in a similar way, where emailing a document you want to print to that email is like sending it directly to the printer. It’s a great way to save time by having papers ready before you arrive at home or work.

The details for setting these up don’t come in the box, but are actually part of the full manual available online. Follow the step-by-step instructions for each of the different options, and you can expand the ET-3710’s scope significantly. It’s a big commitment to go with a printer like this because if you don’t like the results, there’s a whole lot of ink still waiting to hit paper. The ET-3710 is more about economical output than it is about pure quality. There are dedicated photo printers made for that sort of thing, so bear that in mind.

Except this one can do it all. It can print photos, brochures or any other detailed print you want. It can do double-sided printing, and works with Epson’s iPrint app, letting you print off photos you shot on your phone too.

I had little to fuss about when it came to standard black text sheets. Crisp, even when in standard mode, the content is highly legible and looks good. They also come out reasonably quickly. For documents that matter, going to draft mode will make them look rushed, but for copies that aren’t of great importance, it’s a nice way to conserve a little ink. At the highest setting, text looks immaculate.

Photos are going to depend on a few factors. First, the type of paper you’re using. Use better paper, and you can get better results. But again, this isn’t the kind of printer meant to prioritize images. The second thing is size of the print itself. I tested out a couple of 8 x 10 prints first to gauge any weaknesses.

Two things stood out. Blacks, like a night sky, for instance, will turn out a little too grey, making colour accuracy somewhat suspect. Colours are relatively vibrant otherwise, but I found smaller-sized prints were better than larger ones. If 4 x 6 and 5 x 7 prints are what you have in mind, the ET-3710 can handle those well enough.

This is ultimately a volume-based printer. Whether it’s at home or in an office, if you’re going through a lot of pages, it’s the kind of model that vastly reduces anxiety over ink levels. You can print into the thousands of pages and still have ink left to do more. Inkjet cartridges don’t offer that kind of volume.

If you only print leisurely once in a while, this might be overkill. But the ink also isn’t in danger of drying up the way cartridges do when inactive for long periods. By now, you expect an all-in-one to also scan and copy well, and the ET-3710 has those bases covered. It’s a model that should last a long time, even beyond the ink running out the first time. 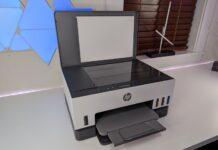 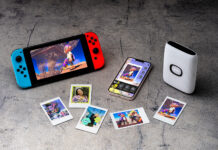 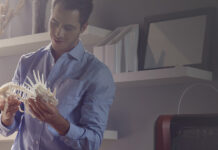