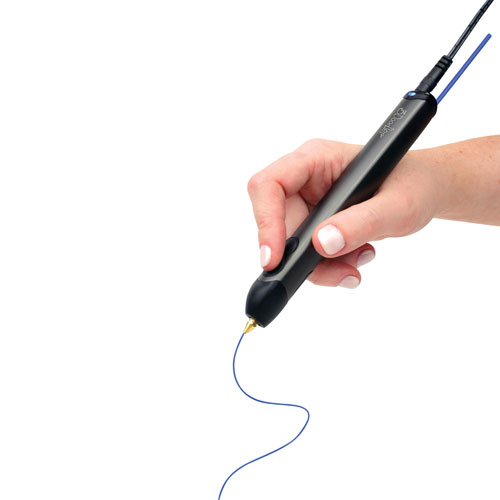 Today I take a look at what has to be considered one of the most fascinating ideas to come along in a very long time—the 3Doodler 2.0 3D Printing Pen with Plastic Packs. This pen is certainly unique, and, while it’s not always the easiest thing to use, if you’re both artistically inclined (not to say artistic) and just a little bit (OK, a LOT) patient, who knows what amazing creations you might come up with. If you’d like to learn all about the 3Doodler 3D Printing Pen, including such details as how it works, what it comes with, and what I myself was actually able to create with it (don’t get too excited about that part!), then keep on reading for the full scoop!

What is a 3Doodler? 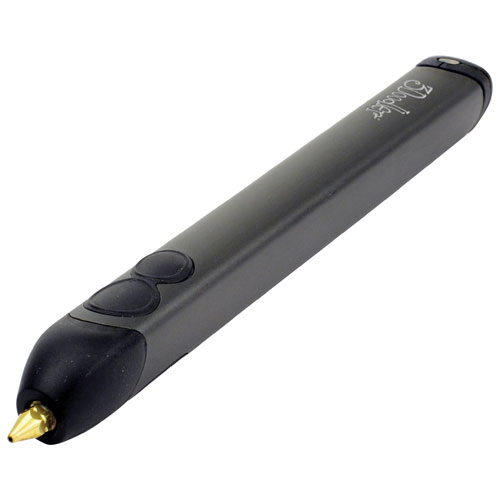 The 3Doodler 2.0 is the second generation version of a highly original idea allowing individuals of an artistic bent to draw, doodle, and create amazing works of art in 3 dimensions without going to the trouble of buying an expensive 3D printer. Shaped much like any conventional pen (only somewhat thicker than most), the 3Doodler fits easily in the hand of the artist and allows one to doodle whatever one’s imagination can conjure up—at least in theory. You will need an artist’s eye, a steady hand, a lot of time, and plenty of patience to get the most enjoyment out of this pen. But, for those of you out there with the right stuff, the possibilities are limitless! The 3Doodler features 2 extrusion / flow speeds (fast and slow), thus helping you to control the rate at which the melted plastic flows from the pen. I personally found that the slower speed was a bit too slow to be useful, and the fast speed sometimes flows a bit faster than I’d like. It’s also important to note that you can buy at least 60 different colours of plastic strands (sold separately) for use with the 3Doodler, and you can even buy differently shaped nozzles (as well as several other cool accessories) that can greatly enhance the 3Doodling process. There’s even a book available that shows some great doodling ideas, as well as a 3Doodler Control Pedal (available at Best Buy) for greater control over plastic extrusion.

If you’ve ever used a hot glue gun, or even just seen one in action, you’ll easily grasp the concept of the 3Doodler 3D Printing Pen. You simply feed one of the plastic strands (whichever colour you’d like to work with) into the special hole at the back end of the pen, and, as it approaches the tip, the plastic begins to melt and come out the nozzle end. The reason the plastic melts is because the pen, which plugs into any standard wall outlet, actually has an internal heating system with 2 different settings (high and low) that’s specially designed for this purpose. It actually reminds me a lot of a wood burning kit in this sense, so if you’ve ever had one of those, you’ll have a pretty good idea of how this works. It’s almost as if they’ve taken the concept of the wood burning tool and the hot glue gun and mashed them together. To keep the strand moving into the melting chamber, there’s a tiny gear system that grabs the strand and continuously pulls it further into the chamber as you doodle. This way, there’s always new plastic being melted and made ready for use. It’s a very interesting concept, although it can be somewhat fiddly in actual practice.

Any fiddlyness the 3Doodler has is largely due to the fact that the PLA plastic (in particular) doesn’t always want to flow very well (probably because the lower temperature setting isn’t quite high enough to really get it melting quickly), and the pen itself is also subject to periodic jams, which are a pain to clear. Then there’s the fact that the plastic hardens almost immediately once it’s been extruded from the nozzle, which means you not only need to have a steady hand, but also a pretty fast one to get the quickly hardening plastic to do your bidding before it loses all of its pliability. Of course, this fast hardening is also one of the pen’s greatest virtues, because once one gets the hang of using the 3Doodler (which I unfortunately may never accomplish), it’s the quickly hardening plastic that allows for the 3 dimensional aspect of doodling. In other words, you often want to leave a line of plastic hanging in mid air, and if the plastic didn’t harden quickly, it would as likely as not collapse into a heap of stringy nothingness. Of course, it still does do this for unskilled doodlers like myself, but I’m of the firm belief that it’s not really supposed to…

What’s included with this set? 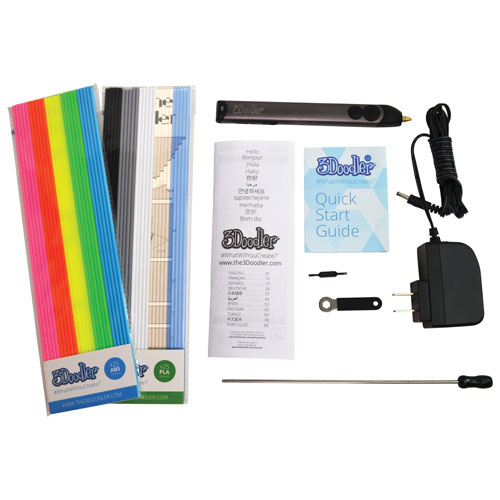 As you can see in the image at left, a number of different parts and components come with the 3Doodler set. Included on this list are the pen itself, the wall adapter, and 3 small tools (including an extractor tool for clearing jams, a small screwdriver-like tool for opening a chamber in the side of the pen, and a small wrench for removing the nozzle when necessary). These parts make up the physical hardware side of the pen. Also included are a full instruction booklet (in 13 languages), a quick start guide, and 50 plastic colour strands to get you started doodling. Of the 50 plastic strands, 25 are of the ABS variety, and 25 are of the PLA variety. The ABS strands are both brighter & more colourful than the PLA strands, and they melt at a higher temperature setting as well. Additionally, the different plastic types serve different purposes when doodling. For instance, the ABS strands work better for drawing straight up into the air than the PLA strands. The 3Doodler pen itself has 2 temperature settings, so you always must ensure that you’re on the correct setting for whichever plastic type you’re using. The 3Doodler’s instructions outline a number of other “Do’s and Don’t” that must be strictly followed as well. Failing to follow the instructions fully may lead to your pen suffering irreparable damage, so I advise having a very good look at the instructions before getting started with your 3Doodler!

For a closer look at what’s included with the 3Doodler (as well as what I tried to make with it), check out this video: 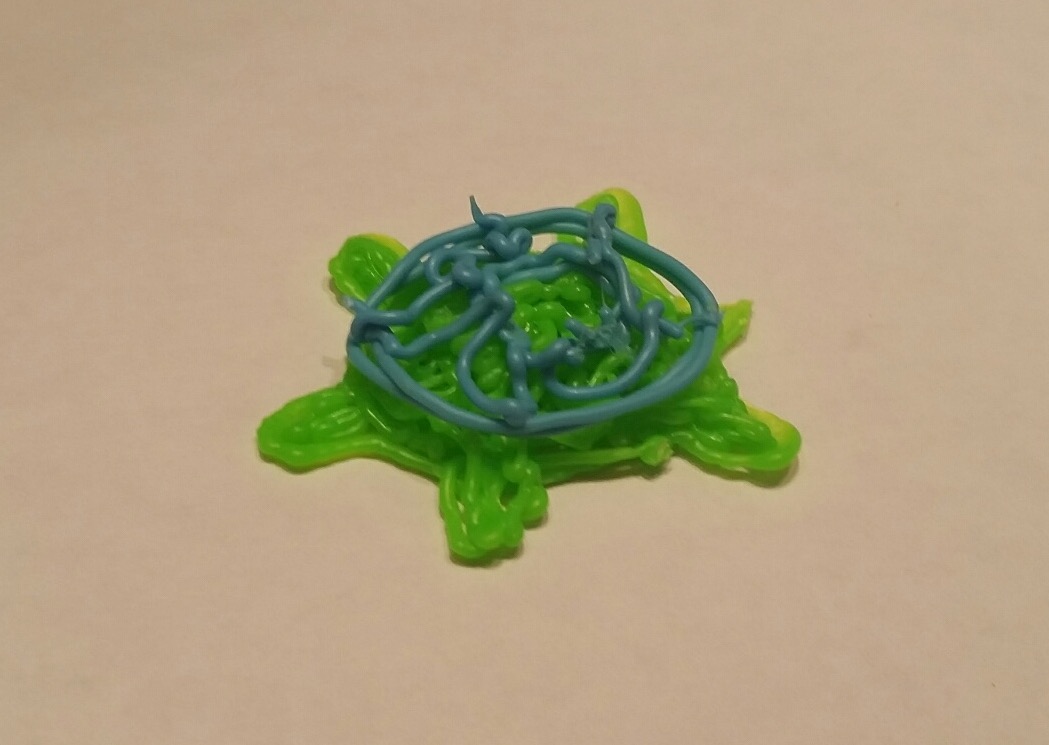 What unrecognizable monstrosity was I able to create with the 3Doodler?

Well, I wanted to make a funky little sea turtle. Unfortunately, the result is pretty sad. Believe it or not, this little creation represents approximately 2 hours of work, which mostly consisted of clearing jams. These jams especially occur when trying to change plastic colours, or even just loading a new plastic strand of the same colour into your 3Doodler. I had intended to divide the shell into more blue sections and then fill them in with more green, but it wasn’t meant to be. I expect that someone with more artistic ability than I have (and a whole lot more patience) could truly come up with something unique and interesting. I did try a few other creations as well, like a tiny cube house and a little stick man, but you really don’t want to see those!

Whether or not one should consider getting a 3Doodler 2.0 depends mostly on whether or not they’re artistically inclined and enjoy undertaking interesting creative projects (as well as having both the time & the patience to do so). Is the 3Doodler fun to use? Sure! But it can also be frustrating. Whichever of these scenarios proves true for you will be the determining factor. If you have the right temperament and an artistic bent (talent notwithstanding), I think you could certainly have a blast with this thing. I’ve even heard of some very clever people making action figures with moving parts using their 3Doodlers. I wish I was capable of something like that!