We’ve been on a real streak for new computer processors lately. Apple made a big splash just two months ago with the announcement of the M1—the new Mac system-on-a-chip processor of its own design. At CES 2021, more big computer processor news has been coming out. Both Intel and AMD have new releases for 2021. Mobile was a big focus this year, with laptops expected to get big performance upgrades.

Intel had the first crack at the CES 2021 stage.

Look for powerful new desktop chips this year, with 11th generation Rocket Lake-S processors. The flagship in the series is the Core i9-11900K with eight-cores, 16-threads and  boosted clock speeds up to a 5.3GHz.

Intel is looking to its forthcoming 11th generation Tiger Lake H-series mobile chips to keep gamers happy. The H-Series are 10nm chips with integrated Xe graphics. At first these will be 35W chips suitable for ultraportable gaming, but Intel says later in the year 45W versions will be coming. The new i7-11375H is in the first batch, with four cores, eight threads, and a boosted clock speed of up to 5GHz.

Also onboard for the H-series is Wi-fi 6 or 6E support, PCIe gen. 4.0 support, plus DDR4 memory at up to 3,200 MHz and LPDDR4/x at up to 4,266 MHz. Intel says the first laptops featuring H-series mobile chips will be announced at CES, with brands like Asus, Acer, and MSI expected to offer over 40 laptops based on the chips in the first half or 2021.

Also showcased at CES 2021 were 12th generation Intel Alder Lake chips. These adopt a hybrid system-on-a-chip design, an approach that’s somewhat similar to Apple’s M1 processor. They’re a way off yet, but we should see Alder Lake chip-powered devices later this year.

Finally, Intel-powered Chromebooks will get a speed boost in 2021 with new 10nm Jasper Lake  Pentium Silver and Celeron processors.

One of the most anticipated announcement from CES 2021 happened today: AMD CEO Dr. Lisa Su gave a CES keynote where she announced the Ryzen 5000 Series of processors is coming to laptops this year.

The Ryzen 5000 series is largely based on AMD’s advanced Zen 3 architecture (although some entry level chips will still incorporate Zen 2 design). This has key advantages such as a single pool of cache memory for reduced latency, with big boosts in performance and power efficiency. The Ryzen 5000 mobile chips will certainly benefit from the big performance boost over the previous generation Ryzen 4000 series, but that power efficiency will pay off for laptops in a big way. AMD says the new Ryzen 7 5800U processor (one of the chips based on Zen 3 architecture) will be good for up to 17.5 hours of general use, or up to 21.5 hours of 1080p video playback.

The high end Ryzen 5000HX mobile processors are aimed at gaming laptops. AMD says they can top 100 fps playing Horizon Zero Dawn at 1080p. In the second half of 2021, PC gamers can also look forward to RDNA 2 GPUs coming to gaming laptops.

The company says to watch for laptops equipped with Ryzen 5000 chips to arrive from Asus, HP and Lenovo by spring, with over 150 different laptop models expected this year.

Stay tuned for news on when PCs powered by these high performance new processors from AMD and Intel will be available at Best Buy. And be sure to keep reading the blog for CES 2021 coverage, which continues through the rest of this week. 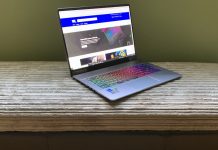