The Old Days of Wireless: Security Wasn’t a Big Concern

Before Bluetooth keyboards and mice took off in popularity, most wireless keyboards used RF radio transmission to communicate with a computer. You’ll know these models by the dongle you plug into a USB port—that’s the receiver for the radio that’s built into the wireless peripheral.

Billions of these have been sold and they’re still popular. While Bluetooth is built into any computer you can buy today, fans of RF wireless keyboards are willing to give up a USB port because of several key advantages of the older technology. RF keyboards typically use less power, so there’s less plugging in or swapping of batteries involved. They can be more reliable than a Bluetooth keyboard—who hasn’t had an issue with a Bluetooth peripheral randomly disconnecting? RF keyboards also have a much longer range, although the value of that one is dubious, unless you tend to type sitting 40 feet from your computer (more on this later).

At any rate, RF keyboards were, and remain, popular. And many of those wireless keyboards (and mice) are equipped with chips manufactured by a Norwegian company called Nordic Semiconductor.

Why is that important?

Well, one of the reasons the Nordic Semiconductor chips were used so frequently is that they were cheap. And one of the reasons they were cheap is that they weren’t equipped with encryption. They supported encrypted transmission, but it was up to the keyboard manufacturer to implement the encryption. And that didn’t always happen. Hacking was something that affected a computer connected to the internet, so that’s where most security efforts were focused …

So how bad could it be for your wireless keyboard to be connected to your PC without encryption?

We found out in a big way this year when a wave of vulnerabilities dubbed “Mousejack” and “Keysniffer” hit the news, both targeting wireless keyboards with Nordic chips. Mousejack lets a hacker take over an unprotected RF wireless keyboard and use it to enter text on a connected PC. That’s bad, since they could do anything from initiating file transfers to wiping a hard drive. No internet connection or malware required. Keysniffer exploits the same vulnerability to instead spy on and record the keystrokes entered using an RF wireless keyboard. That’s also bad. Kiss your passwords good-bye, for one thing. Private messages? Not so private any more …

Making the situation worse, all that’s required to hack the vulnerable peripherals is a $12 radio dongle that plugs into a laptop’s USB port and fifteen lines of code. Plus criminal intent. Remember the RF keyboard’s superior wireless range? That means the hacker can be sitting safely out of sight, 75 metres away.

Bluetooth keyboards aren’t affected by these hacks. The Bluetooth standard uses end-to-end encryption and the short range means any would-be hacker would have to be very close to even attempt an attack. 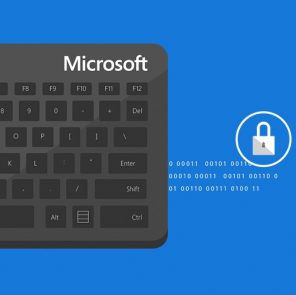 Microsoft AES Technology to the Rescue

Microsoft offers a line-up of RF wireless keyboards and mice that feature the protection of AES (128-bit Advanced Encryption Standard) security. AES level encryption is one of the most secure standards available, and it’s used by governments and financial institutions to protect confidential data. Using one of these keyboards, all communications between the peripheral and the computer are encrypted.

Microsoft AES keyboards and mice go beyond encrypted transmission to employ other advanced advanced security features, taking data protection to an entirely new level. For example, during manufacturing, the unique encryption key (needed to de-scramble the data) is programmed into each keyboard/receiver with a direct connection—it’s never transmitted wirelessly, preventing the unlikely scenario of interception at the factory. Microsoft also locks down the wireless peripheral’s firmware. There are no back doors or test modes a hacker could exploit to gain access and re-program the keyboard or steal the encryption key.

The transmission between Microsoft AES keyboard and PC is also protected by advanced techniques that randomize data and include sequence numbers. These measures prevent a hacker from trying to insert data, block portions of a keyboard entry or capture data to analyze it in search of patterns.

In other words, when you see the logo for Microsoft AES encryption on a wireless keyboard, you know your data is secure.

Microsoft doesn’t just make one AES Keyboard, it offers a wide range of wireless keyboards and mice to suit differences in use, budget and style preference.

The Microsoft Wireless Desktop 900 BlueTrack Keyboard & Mouse Combo proves you don’t have to spend a fortune to get the upper hand in wireless data security. It employs quiet-touch chiclet style keys with customizable buttons, hot keys and a full-sized mouse. It offers the RF keyboard battery life advantage, with an average battery life of two years. And it’s fully protected with Microsoft AES security.

Fans of Microsoft’s curved, ergonomic keyboards have the Microsoft Wireless Comfort Desktop 5050 Optical Keyboard & Mouse Combo. The familiar comfort curved design with palm rest is there, as a wireless mouse with BlueTrack technology so it will work on just about any surface. The keyboard gets 15 months of battery life and both keyboard and mouse use Microsoft’s AES encryption. Or, for the ultimate in productivity and ergonomics, the split-design Microsoft Sculpt Ergonomic Wireless Bluetrack Desktop keyboard offers a cushioned palm rest, separate keypad, an optical mouse with scroll wheel—and Microsoft AES security.

Researchers estimate as many as one billion RF wireless keyboards and mice that are vulnerable to hacking are still being used. So if you’re not sure how secure your RF wireless keyboard is and you don’t want to make the switch to Bluetooth, replace it with one equipped with Microsoft’s AES encryption technology.