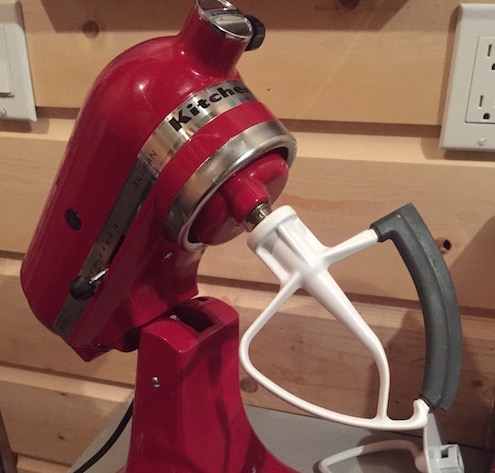 There’s just something about a KitchenAid stand mixer. It’s one of my favourite small appliances, and I know it’s a favourite among friends and family too.

Because we moved houses 6 months ago and had to renovate the house we bought for the past 5 months, I’m still in the process of getting my kitchen set up. That means all of my KitchenAid appliances including my stand mixer were packed up in boxes until last week. That’s a long time to be without my favourite baking gear, and trust me when I saw it was challenging to bake after you’ve experienced the luxury of having a stand mixer do everything for you.

Here’s a look at the KitchenAid attachments I tried out this week. 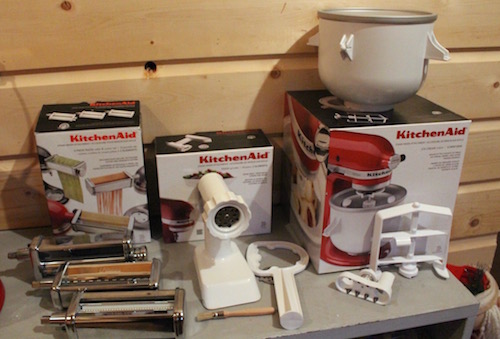 To test the attachments I was sent the KitchenAid Artisan Stand Mixer. You might not think this very often about an appliance, but this red-hot number looks sleek and absolutely gorgeous on your counter tops. I found myself admiring it every time I passed by, and I love how the latest KitchenAid stand mixers include the spill guard.

The Food Grinder is made from sturdy plastic, and the grinding plates feel very durable. I tried to bend them and they wouldn’t budge, so you know they’ll stand up to whatever you’re grinding.

I’ve tried a few ice cream makers, so I was impressed with the depth of the KitchenAid Ice Cream Maker’s bowl. It seemed larger than other ice cream makers I’ve had, but still very light weight.

Speaking of heavy, the Pasta Rollers are no slouches in the heft department. Each and every pasta roller is all metal to stand up to years of homemade pasta. They reminded me of vintage appliances you’d see in diners.

The simplest attachment and my favourite of the three is the Flex Edge Beater. I’ve spent years stopping my mixer to scrape down the sides with a spatula, but this simple attachment takes away that job completely. It’s just as sturdy as the original paddle mixer, but it has an edge that scrapes the sides of the bowl.

As I’ve mentioned, I’ve used the KitchenAid Artisan stand mixer myself for several years so I know the ins and outs of the appliance. It comes with three attachments: a paddle, whisk, and dough hook, and you can switch them up depending on what you’re making. I’ve made everything from bread dough to cookies loaded with chocolate chips and nuts, and it mixes everything perfectly. 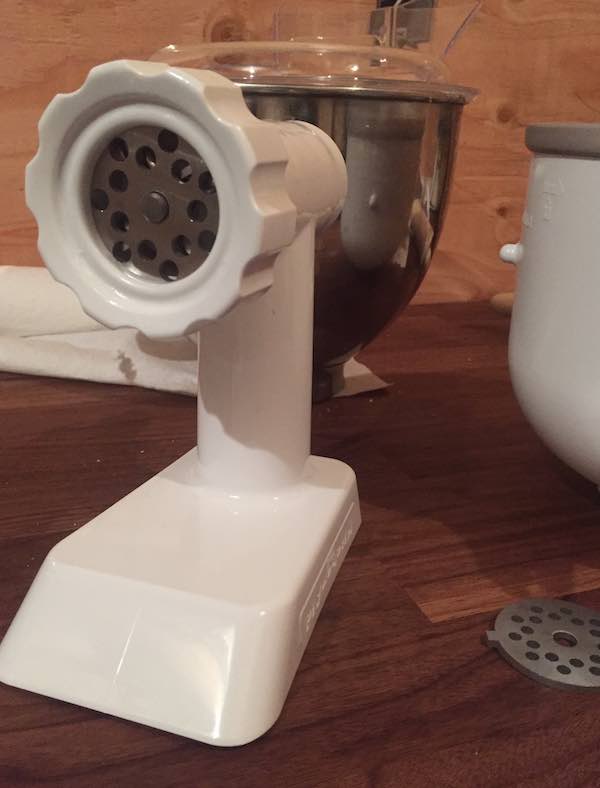 When I first unpacked the food grinder, I was surprised at how lightweight and simple it was. The only experience I’ve ever had with a food grinder was my Grandma’s big metal grinder, and that’s been retired to a shelf for decades. The KitchenAid Food Grinder is really light, so I was wondering just how well it would grind.

All I had on hand to run through it were some whole almonds and dates, but that was a great choice for me because I’ve been tossing some seeds to my chickens every night and they don’t like whole almonds. Rather than slicing almonds up by hand, something that I’m not gifted enough with the knife skills to even attempt; I ran them through the grinder.

A word of advice: I’ve never used these attachments before so I had no idea how tight was tight enough. The first time I tried to use the food grinder it tipped and spilt everything out onto the countertop. Lesson learnt, and my second attempt after ensuring the food grinder was fully attached went well. I put through the dates and the almonds and they came out in a fine grind that was perfect for topping cereal or feeding to a few hungry chickens. 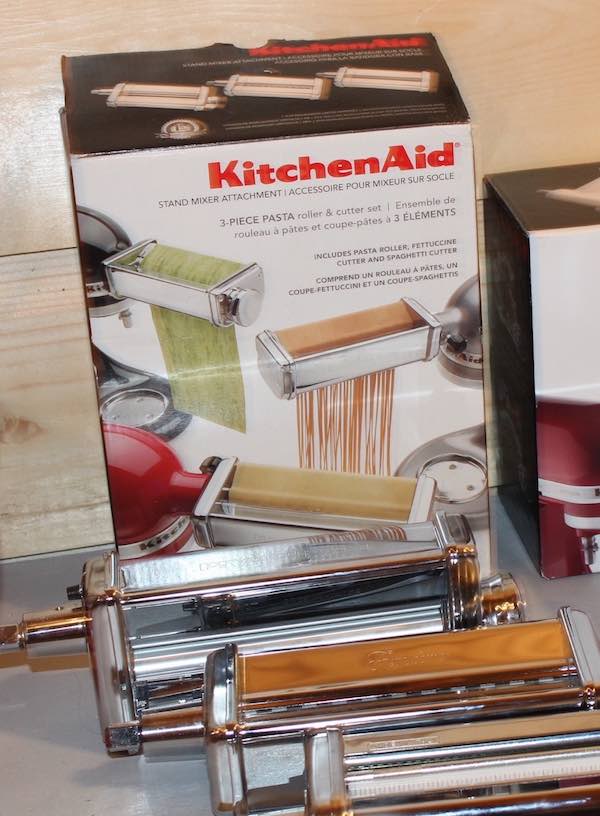 To test out the pasta rollers I decided to make some dough and run through spaghetti. If you’ve never tried making your own pasta, you really have to. The benefits make the effort worth it, and you can use your own flour if you’re gluten free or are trying to eliminate an allergen, and when you cook it, the pasta plumps up in the pot.

With a KitchenAid stand mixer and the pasta roller attachment, it’s very simple to get pasta on the table, and because you have three rollers you can make anything.

To test out the pasta rollers, I whipped up a batch of spaghetti. The video below shows my test, and even I was surprised it was so easy. Just like with the food grinder, I had some trouble learning to attach the pasta roller to the mixer, but once I did I was off.

The trick to making the best pasta is making sure you really run the dough with the dough hook. I let mine mix for several minutes, then I broke the dough apart into sections and kneaded it. It’s going to be really hard to knead because it’s fairly dry, but if it was sticky it wouldn’t run through the machine. I also used a rolling pin to ensure it was thin enough to run through.

Once I had the attachment on the machine correctly, I ran the pasta through and it shredded it into amazing spaghetti strings. 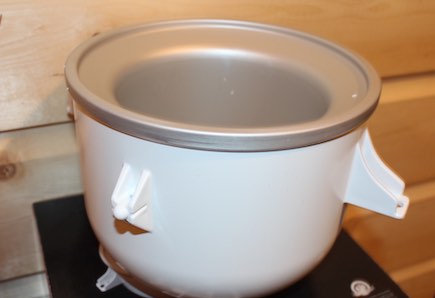 When you have an ice cream maker, you can make any type of ice cream, sorbet, or ice milk very easily, and what I love about the KitchenAid ice cream maker was that it was very simple to use. You just freeze the bowl for 24 hours ahead of time, take it out and attach it to your mixer just like you would your mixing bowl, and attach the paddle.

I had a very hard time attaching the paddle for some reason, but once I did I found making ice cream easy. The trick is to make sure your bowl is frozen for at least 24 hours. Unless it is, it will take a long time to make your ice cream and it will be more cream and less ice.

There are so many recipes you can try with an ice cream maker at home, but I’ve found that good old-fashioned vanilla bean is a favourite around here. This is one of those attachments that someone who’s had a KitchenAid for a long time will look at in wonder because it means No More Bowl Scraping!

It attaches exactly like the standard KitchenAid paddle, but that’s where the similarities end. Unlike the standard paddle, the Flex Edge beater will gently glide along the sides of the bowl and remove everything that’s piled up. When you’re done beating, you can just remove the paddle and use it as a scraper. That takes away the need to use a spatula completely, and you know everything is perfectly mixed without having to stop the beater and scrape.

The number one reason someone will stop using an appliance is because it’s difficult to clean. I love making juice in a juicer, but if I have to spend half hour hand cleaning something, I’m going to skip it in favor of something simpler.

Thankfully, I’d never shelve these KitchenAid attachments because they’re all really easy to clean. I get into more detail about cleaning in the video below, but the ice cream bowl set, food grinder, and flex edge beater will all wash up easily in a sink of sudsy water.

The pasta rollers are a bit more complex. You can’t immerse them in water and they’re definitely not dishwasher safe. To clean them you have to let them dry for an hour until the pasta bits left behind are dry. Once dry, you take the included brush and just brush the bits away. It takes a bit of work, but I managed to get all of the pasta out of the blades. After that, just wipe them down with a soft cloth until they’re shiny and put them away.

My favourite feature of the pasta rollers? They’re small, so you can just put them away in a drawer of bigger utensils. I’ve tried other pasta makers and they can take up a lot of space. I love that these do the same job without needing extra room in the cupboard.

Take a look at the video I made of testing the pasta rollers and you can see for yourself how compact they are and how well they work. Don’t mind my moving boxes:

KitchenAid is new to the shelves of Best Buy, so go on over and take a look at everything you can cook and bake with. And if you’re looking for kitchen-related Christmas gifts, any one of these attachments will be a great addition to someone’s stand mixer.