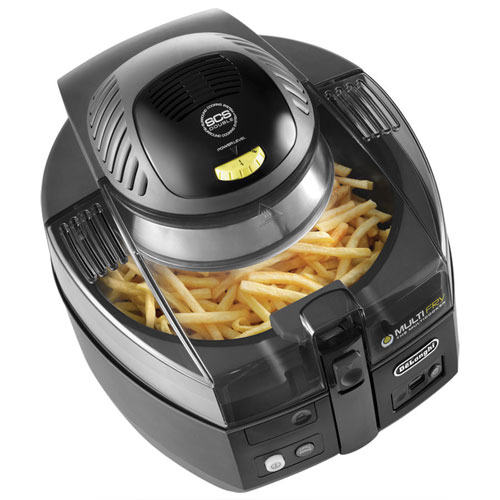 For the vast majority of my life, I’ve been a pretty healthy individual. I workout, eat (relatively) clean, and don’t smoke. True, I may imbibe in a few too many glasses of wine during the week, but everyone’s got a vice, right? The point is that health is important to me, so when I was asked to review the De’Longhi MultiFry Low-Oil Fryer and Multicooker, I have to admit I was less than enthused. Even though its very name made it clear that it uses “low-oil,” I had visions of gallons of Crisco, greasy French fries, and an inevitable muffin top that would come as a result of eating the fruits of my labour. Then I checked out the De’Longhi website to see what this “low-oil fryer” was all about, and my tune changed pretty darn fast!

Here’s the deal. The De’Longhi MultiFry isn’t really a “fryer” at all. It’s really a multicooker that allows you to whip up deliciously golden French fries with one-tablespoon of oil (ONE!) and prepare everything from risottos to cous cous, stews to ratatouilles, and even pizzas, cakes and pies. Even typing that last sentence blows my mind. How is it possible that one appliance can do all of that? Well, it is, and needless to say, once I read what the MultiFry was all about, I was equally intrigued and skeptical. 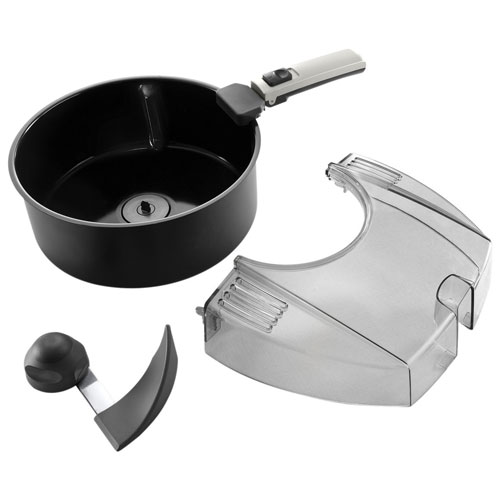 The MultiFry itself is comprised of a bowl that is large enough to cook up to 1.5kg of food and a removable automatic mixing paddle that mixes food consistently so you can fry, sauté, stew, and bake to your heart’s content without needing to do any stirring yourself. On the face of the MultiFry are three buttons­–open, power, and bottom element–and a removable timer.

As far as set up is concerned, it involved little more than washing the bowl, paddle, and removable lid, and plugging the MultiFry into a wall outlet. I had already purchased the ingredients for several of the recipes listed in the cookbook that comes with the MultiFry so was ready to dive right in.

Now, if you’ve read any of my past product reviews, you’ll know that I’m not a big fan of reading instructions. I like to think I’m smart enough to figure things out on my own–yet sadly I’m almost always proven wrong­–but given that the De’Longhi MultiFry involved both heat and electricity, I decided that it was likely in my best interests to at least skim the instructions. Once I was good to go, I chose to whip up the Chicken with Mushrooms recipe from the included cookbook.

Whenever I cook, I prepare all my ingredients first. In this case, I chopped a shallot, sliced some mushrooms, and cut three chicken breasts into cubes. As instructed, I then put one tablespoon of peanut oil and my chopped shallots in the bowl, closed the lid, set the thermostat dial to position 4, pressed the bottom heating element button, and then the on/off button. The instructions said to sauté for five minutes, however, the paddle didn’t start moving. After a minute I started to panic a bit thinking that my shallots were going to burn, so opened the lid to ensure the paddle was actually secured to the bottom of the bowl. It was. I then grabbed the instructions and read the line that said the paddle takes a few minutes to start moving. Oh. At about 3 minutes in, it started to slowly turn in the bowl. Because the lid is clear, I watched the paddle sauté my shallots to perfection with the enthusiasm of a toddler on Christmas Eve. 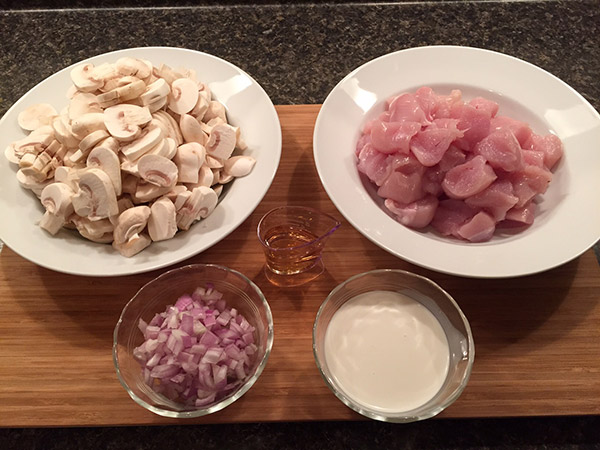 The next step was to add the mushrooms and cook for another six minutes, and then add the chicken, salt and pepper, and cook for another 10 minutes. After that, I added a little milk, and waited another five minutes for a gravy to be created. To say this process was easy is perhaps the understatement of the year. You literally toss your ingredients in and the MultiFry does all the work for you. There’s no stirring or guesswork involved at all, and at the end, I was rewarded with a delicious, healthy dinner made with zero additional oil. After my meal I set about the task of cleaning the MultiFry, which ended up being ridculously easy. I simply removed the bowl and paddle, washed them in soapy water, and I was done. They are also dishwasher friendly, but my dishwasher tends to melt things, so I kept it old school. So far, colour me impressed! 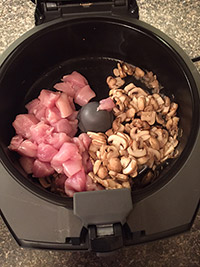 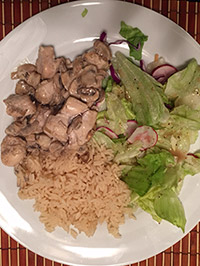 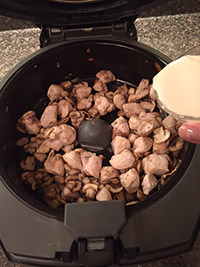 In good conscience, I couldn’t review the De’Longhi MultiFry without making French fries. So I cut two and a half pounds of Yukon Gold potatoes into strips, added one tablespoon of peanut oil to the MutliFry bowl, let it heat up and then tossed in the potatoes. Even though my previous Chicken with Mushrooms experiment ended up being delicious, I was a little skeptical that one tablespoon of oil could create crispy golden fries; but oh my did it ever. The paddle slowly moved my potatoes and oil in the bowl, and after 47 minutes, I had perfectly “fried” French fries. Thank goodness for my neighbours though­­–two single guys in their twenties–otherwise I would have eaten them all myself.

Here’s a short video of me making my fries. I feel it necessary to say three things: One, I am not a filmaker. Two, I am aware I need a manicure. Three, the entire time I tested the MultiFry I kept forgetting to press “Open” to open the lid and tried to do it manually. Oh, and that “smacking” sound you hear when the lid opens? That’s it smacking into my kitchen cabinets … the joys of apartment living!

Yes, pizza. When you remove the mixing paddle from the De’Longhi MultiFry you can grill, broil, and convention bake a wide variety of dishes right on your countertop. I chose pizza, because I just didn’t think it was possible, and as it turns out, it was a lot more difficult to prepare than I had expected. Don’t get me wrong, the MultiFry worked its magic as well as it did in the previous two tests, but sometimes it’s the chef who just can’t get it together. What I’m trying to say is that making pizza dough from scratch is tough!

It took me four tries to get the dough right because as it turns out, measuring correctly and reading instructions is very important when it comes to dough. However, once I did get it right, I stretched it out to 10 inches, placed it in the bottom of the bowl and topped it with marinara sauce. I cooked it for 15 minutes, opened the lid, turned the crust 180-degrees (burning my fingers in the process), topped it with one cup of shredded mozzarella and waited another 10 minutes until the cheese was bubbling to perfection. Getting the pizza out of the bowl was a little bit of a challenge. I finally ended up using a spatula and some fancy bowl-tilting maneuvers, but once it was out of the bowl a piece quickly ended up in my mouth. I wasn’t a huge fan of the dough (it was very doughy), but overall, it was pretty darn good! 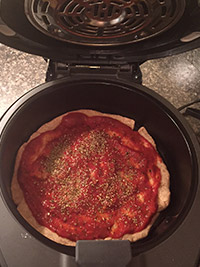 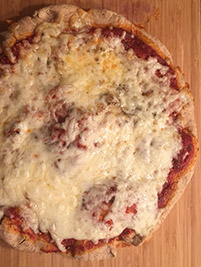 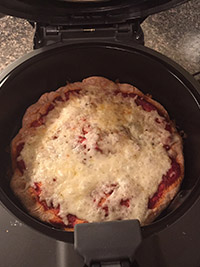 As I mentioned, I was a bit skeptical of the De’longhi multiFry. I just didn’t think that one kitchen appliance could be so versatile that it could tackle everything from risotto to French fries to pizza and cakes, but it turns out I had no reason to be skeptical at all. It’s an exceptionally versatile appliance that would be a welcome addition to any kitchen with sufficient storage space, as it does take up a considerable amount of counter real estate.

In addition to being a ridiculously versatile appliance, what really makes the MultiFry stand out is its surround cooking system, which features two heating elements to ensure even cooking no matter what recipe you decide to tackle. I also really liked how simple it was to use, and how the element would stop when you lifted the lid, but how the paddle would keep rotating to ensure nothing got burnt or stuck to the bottom of the bowl.

I also liked that the timer was removable so I could bring it with me to my living room and still hear it go off when my food was ready. Lastly, I was thrilled at how easy it was to clean. I hate doing dishes, and my dishwasher is an “urban condo” size of 18” wide, so it doesn’t fit a whole lot. Thankfully, to clean the MultiFry, I simply needed to remove the bowl, lid, and paddle (if used), wash in warm soapy water, and voila, done.

While I was thrilled enough with the MultiFry that I’d actually like one myself, there were a few negatives that deserve mentioning. First, the MultiFry guide and website talk about how quickly it can whip up dinner, but 47 minutes for fries, isn’t exactly fast. In fact, you could very easily bake fries in your oven in half the time. It’s also very loud, which you may have picked up on in the video clip above. That said, I imagine De’Longhi is aware of this, which is likely why the timer is removable, because there is no way you would hear it if you weren’t able to tote it with you. Finally, while the MultiFry does come with a recipe book and there is an app you can download for more recipes, I’m not convinced that you can whip up something of your own creation; you’re really at the mercy of a recipe.

Would I recommend the De’Longhi MultiFry Low-Oil Fryer and Multicooker?  Absolutely! The pros definitely outweigh the cons! I mean, let’s be real here … delicious, easy to prepare meals, side dishes, and desserts with minimal oil? I’m sold!