A big round of applause goes to the Best Buy team for pulling off another successful Life and Tech event in Dundas Square, Toronto. Albeit, the rain did show up, but that didn’t stop the team from delivering a day filled with fun, fashion, and tech. While there, I had the pleasure of witnessing the latest and coolest technology trends. Here are some of the gadgets I’m excited about.

Let’s talk about Virtual Reality (VR). It’s nothing new, but it’s getting more impressive. This year, we had exhibitors from a number of brands (such as Noon VR, Merge VR, Homido VR, and Samsung) showing off their devices. I sampled the Samsung VR experience by going on a virtual rollercoaster at 6Flags. The booth offered swirly chairs so that as you are going down the ride, you can twirl to see your surroundings and check out the people behind you. That’s why VR is so cool, it allows you to be in the content rather than just watch. It’s about providing a 360 experience. For two minutes, I was captured. The only thing that was 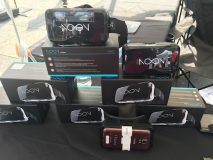 missing was the wind of a rollercoaster on my face. Yes, I’m complaining over the Toronto humidity. But it would have been really cool if they had fans in the booth. Ok, I’m being high maintenance. With all the spinning, I even felt a little nauseous. Samsung creates all the content for their mobile devices, so you must have a Samsung phone to get their VR experience. So if you are Samsung phone owner, then you have half the pieces to live in VR. All you need is the Samsung headset.

I’m also excited that Oculus VR is making their devices available for purchase this September. Instead of a rollercoaster, I experienced what it’s like to be stuck in a museum with a dinosaur, along with being on the edge of a building in a busy fictitious city. For the Oculus, you don’t need a mobile phone (thank goodness), just a desktop or laptop that you connect to a sensory device. The offerings include Oculus’s free and paid content and YouTube 360. I’m into this. 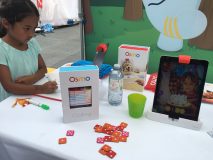 What I love about the Life and Tech event is that you’ll see products that aren’t just cool, but purposeful. I have a huge gadget crush on the Osmo. This is a hands-on learning system that teaches kids how to code, spell, and work with numbers. Though I don’t have any children, I know it would have been useful for my nieces and nephew when they were younger. I had the chance to play with the spell tracker, a device that clips onto the top of an iPad that can read the letters placed in front of it. Kids are supposed to guess the spelling of a random word. As an adult, it was still fun to play with. In addition, if I were a parent, I’d be assured that this is a valuable game for my child’s learning development. 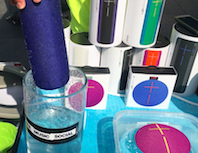 Speakers that can float in water have become a hot selling feature. This is not a new concept, but manufacturers are promoting it more, maybe because people are buying those swan and donut floaties to put in the pool or lake. Whatever the reason, they’re nice to have for the summer. I can’t wait to upgrade my old Bluetooth speakers. UE Boom is one of my favourite brands. They have IPX7-rated protection, which means that they can be immersed in water up to one metre deep for up to 30 minutes.

Another great brand of speakers is House of Marley, whose affordable Chant Sport model is also waterproof and floatable. This product is made from a blend of bio-plastic, silicon, and recyclable aluminium housing.

I’m totally fangirling over the Garmin TruSwing. It’s a simple, user-friendly training device to help improve your golf swing. I also don’t like to have something wrapped around my wrist or arm, and this gadget clasps onto your club. Take a swing, and it renders your form. From there, you can analyse why the ball went more left than centre. When I test drove it, the app was quick to deliver the results. Although it might be a little annoying to unscrew the gadget to place it on different clubs, you can be selective. This would be perfect for the driving range and for getting instant feedback on your mobile phone. I’m a novice player but don’t have the bucks to hire a trainer to watch my form. So, it seems like this would give me a good indication that my swing is correct. Or at least see where I’m going wrong! 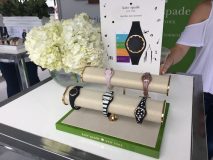 You know who else I fangirl? Kate Spade. There happened to be a tiny booth showcasing her tracking accessories (that pretty much look like bracelets) so I naturally navigated there. I love her use of patterns and colors. Didn’t realise she entered the game of daily trackers but why not, eh? The tracker offers the basics such as step count and calories burned, as well as monitor your sleep. Apparently, it assists in taking selfies or groups shots, no need for a selfie stick. Just double tap on the device and it’ll snap it for you.

I had a blast at this year’s Best Buy’s Life & Tech event. It’s always so much fun to learn about new products in market. Overall it’s neat to see technology is changing the way kids are learning as well as how we collect data to monitor our health. I’m looking forward to attending next year’s event.

From the products listed in this article, which one are you interested in? And what do you think of wearable tech?