It’s been a year since Google launched Stadia, their cloud game streaming service. And, much like any new platform or service, it has had its fair share of ups and downs. However, over the past 12 months there have been a whole slew of improvements, announcements and games.

Stadia is Google’s cloud-based gaming platform, which allows you to instantly play your favourite video games on screens you already own. One of the best things about the service is that you don’t have to wait for game downloads, updates, or installs. With Stadia, you’ve got the freedom how to play, what to play, and where to play.

What do I need to play?

Stadia is free for anyone with an internet connection and a Gmail address. Sign up for free at Stadia.com to start playing. And, when you sign up for an account you get $10 off your first purchase.

Additionally, there is an optional monthly subscription called Stadia Pro. New users get a free month and with your subscription, you get free games each month, discounts in the store, and the ability to stream up to 4K 60fps. Once you claim a game with Stadia Pro it’s yours to play as much as you want as long as you subscribe. If your subscription lapses, when you renew all the games that you claimed are there waiting for you.

Now, let’s take a look at what screens you can play Stadia on and what controllers are supported.

Over the past year, there have been over 100 improvements and features added to Stadia. And, there have been more than 100 games released. Take a look below for a list of features, updates and game info.

Since launch, there have been more than 100 games released and the library is expected to grow to over 135 by the end of the year. Stadia has a wide variety of games from many different genres including Doom Eternal, Mortal Kombat 11 Ultimate, Marvel’s Avengers, Cyberpunk 2077, NBA 2K21, Sekiro, Watch Dogs Legion and Red Dead Redemption 2—to name a few. Furthermore, in the past 12 months, there have been 15 First on Stadia games such as Get Packed, Orcs Must Die! 3, Super Bomberman R Online, Gylt and Risk of Rain 2.

In addition, throughout the year there have been Free Play Weekends where gamers had the chance to try out games such as Division 2, Borderlands 3 and Crew 2. Moreover, in October, gamers were able to play 7 day demos of PAC-MAN Mega Tunnel Battle, Humankind and Immortals Fenyx Rising.

Since launch, Stadia Pro subscribers have gotten more than 65 free games including Little Nightmares, Strange Brigade, Embr, Monster Boy and the Cursed Kingdom. In addition, Google has made partnerships with Harmonix, Supermassive Games and Uppercut Games to bring games to Stadia. And, first party studio Stadia Games and Entertainment opened offices in both Montreal and Los Angeles.

Currently Stadia is available in 14 countries: USA, Canada, UK, Ireland, France, Germany, Italy, Spain, Netherlands, Belgium, Denmark, Sweden, Norway, and Finland. By the end of 2020, there will be even more users as Google’s cloud gaming service is expanding to more countries in Europe, Africa and the Middle East.

Simply follow this link and click the “Pre-order on Stadia” button. You’ll receive an email and redemption code within a week of the game launching. Then, follow the email instructions for code redemption and then sit back and wait for your Stadia Premier Edition to be delivered.

First free game to all players

Thanks for stopping by to celebrate Stadia’s 1 year anniversary on the Best Buy Blog. As you can see, in 12 short months we’ve seen over 100 enhancements and features added to Stadia. Furthermore, with more than 100 games available now there is expected to be a total of over 135 games by the end of 2020. Public testing of Stadia on iOS is starting soon and Stadia is expanding to even more countries around the world by the end of this year.

With the acquisition of Typhoon Studios, partnerships with top studios like Supermassive Games and the opening of Stadia Games and Entertainment in Montreal and LA—there is a lot to be excited about Stadia today and in the future. If you are planning to pickup a Chromebook, click here for a list of Chromebooks at Best Buy that will get you 3 months of Stadia Pro for free.

While you are here don’t forget to check out some of my other Stadia related articles:

Let me know in the comments section below if you’ve tried Stadia and what your favourite game is. 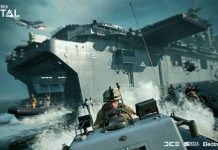