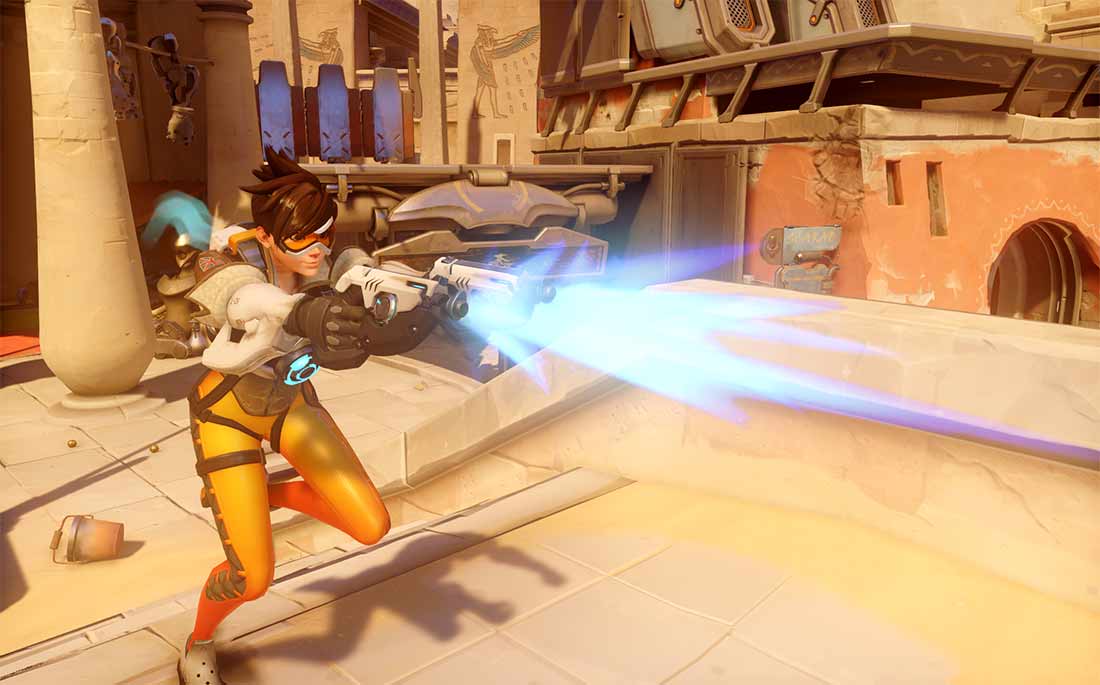 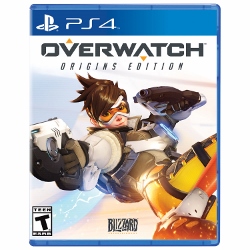 I’m playing Blizzard Entertainment’s new Overwatch multiplayer first-person shooter, and I currently hate the character Hanzo. He’s a Samurai-type sniper who uses a bow and arrow quite effectively; however it’s his “ultimate” power that keeps killing me time and again. It’s called Dragonstrike, and when he uses it, a big two-headed ethereal dragon-thingy instantly kills everyone on my team it touches … oh, and it goes through walls!!! I hate that guy, seriously. But, if I want to excel at Overwatch, I’m going to have to get to know all 21 (soon to be 22) of its character’s skills, weaknesses, pros and cons, if I want to become a real threat in the game’s competitive play mode. That’s where things get heavy, because even though Overwatch is a blast to play with friends, it’s also got some serious aspirations as the e-sports champ of the future. 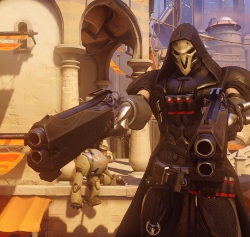 Misfits, Heroes, Villains … and a lot of backstory

Although a story is not really necessary to a shooter’s gameplay, I do appreciate that someone put a heck of a lot of trouble into fleshing out the game world’s whole history. It adds a little extra something to know the backstories of the characters, and how they fit with each other … even though, as I said, it doesn’t affect gameplay at all. But essentially, the game takes place 60 years in the future, where a UN-sanctioned group of heroes who called themselves Overwatch fought a bunch of sentient robots in something called the Omnic Crisis. But, rogue factions within Overwatch, jealousy and corruption caused the group to fall out of favour with the world, and they disbanded after an explosion at their base supposedly took out their two leaders. Now, someone’s trying to get the band back together, and you get to play one of the many Overwatch misfits (and murderers!) in six-versus-six multiplayer modes, both friendly and in competitive play.

The game was actually developed following the cancellation of the MMO Titan. Some of the Titan team came up with the concept of Overwatch, based on the success of team-based first-person shooters like Team Fortress 2, and you can see it in the pithy and cartoon-ish character design. 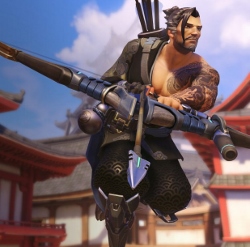 Not Just Run and Gun

At first glance, Overwatch seems pretty simple. Two teams of six battle it out to control capture points, moving payloads or some strategic objective. But its seeming simplicity is deceiving, thanks to Overwatch’s diverse cast of characters. You see, Hanzo the jerk-face Samurai is a sniper character, and so is Widowmaker, a cold-as-ice French assassin who uses a grappling hook and high-powered rifle to do her dirty business. Both are essentially the same “class” however they play completely different. And that’s where Overwatch stands out from other team-based shooters, for me. Each of its 21 current characters is a unique experience to play and master. That means this is no straight up “run-and-gun” affair, because you actually need some strategy, and the right combination of characters on your team, if you’re going to succeed. Each hero has a main weapon (and only a couple have more than one), travel or evade-type power, some have alternate attack abilities, and everyone has an “ultimate” that needs to be charged over time. Widowmaker’s ultimate reveals enemies on a map to everyone on the team, while cybernetic cowboy McRee’s is a Clint Eastwood-style triple headshot takedown with a six-shooter. Hanzo’s giant ghost dragon still infuriates me. Jerk-face.

And even though the roster of characters is indeed divided into classes, such as Offense, Defense, Tank and Support (and the game always encourages a good mix of these hero types at the start of a match), this is a very character-driven game. Thankfully, no character is solely reliant on their one (or possibly two) weapon, as again, to excel at the game you need to understand the nuances of each character and their particular skills, pros and cons … and that’s where Overwatch shines. It’s pretty apparent that a lot of thought went into making gameplay fast and fun, easy to get into, but difficult to master. It’s the perfect recipe for an e-sports success, and that’s what Blizzard is likely counting on. Once, the company dominated e-sports with its Starcraft series, but eventually other games (League of Legends, Dota 2, etc) took that crown away. Overwatch definitely feels like it was developed as the new e-sports top dog, right from tense and furious gameplay, down to the stylized and sweet animated design. 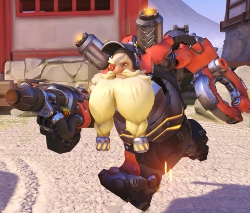 Big, bold and colourful, Overwatch shows off its e-sports aspirations by making the characters front-and-centre, displaying them like gladiators for admiration. And after every match, one player’s best moves in the battle get shown off in a few-second highlight reel of sorts, featuring a customizable animated intro. As you play the game, you can unlock cosmetic items, like skins, voice lines or animated intros or poses, so you can trick out your characters how you like best. The look is very reminiscent of Team Fortress 2, with cartoon-ish characters, and lots of gunplay, however the graphics are crisper, and the environments sport water, dust, sun halos and lots of subtleties that make this a very immersive shooter. I also found the music and sound to be quite exceptional. 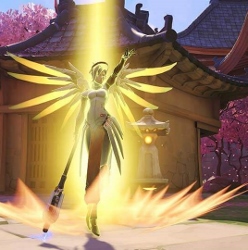 Push the Cart, Hold the Point, Repeat … then Compete

If you’ve ever played a multiplayer first-person shooter like team Fortress 2, then you know the routine when it comes to game modes. Essentially, there’s capture the point, escort the payload, king of the hill, and a point-capture/payload escort combo. When you’re playing, the game cycles through these modes, and the dozen or so maps. You’ll also find a tutorial mode, practice mode, and AI mode. However, it is Overwatch’s competitive mode that has piqued a lot of interest. After players reach level 25 (through points achieved while playing matches), they can participate (segregated by region and platform) in ranked play. The rules are a bit stricter than in casual play, and players can take it a tad too seriously because of their rankings, however, it is a pretty fun mode if you like proving you’ve got the real skills to maybe compete professionally one day.

Overwatch is a different type of FPS with strong, strategic gameplay, and a diverse cast of characters you really have to play to appreciate … and counter. It’s replaced similar games like TF2 and Star Wars Battlefront for my FPS game time, and I can definitely see it becoming an e-sport favourite for its great animation, game highlight reels, and exciting gunplay. Hanzo is still a jerk-face, though.