Sony has released a line of Bluetooth speakers that has serious potential to shake up the market. The SRS-XB20, SRS-XB30, and SRS-XB40 all have similar styling and features, including the can’t-miss branding of the trademarked EXTRA BASS on the packaging. They come in a variety of colours, and the lights further enhance their slick look. Let’s dig into the similarities and the differences, and which models would be best for you.

The features of Bluetooth connectivity are widely known: wireless communication with playback devices in any environment, compatibility with virtually any device, and easy pairing. The technology keeps improving, both in quality of audio and the distance the signal can travel uninterrupted, making Bluetooth an increasingly attractive method of enjoying wireless music. This line of Sony speakers boasts version 4.2, extending the reliable broadcast distance to 30’, and increases the amount of data it can transfer. This means higher quality music at a greater distance, which can only be considered a win.

Sony is anything but subtle in advertising the EXTRA BASS featured in this line of speakers. Now, I’ve written in this blog many times that I am not a fan of artificially torqued bass that sacrifices the rest of the musical range, but I always go into these reviews with an open mind and open ears.

To achieve the bass, Sony utilizes a passive radiator, meaning there is no electric infrastructure to the “subwoofer” that produces the bass. It produces sound by amplifying the air flow being generated by the other active drivers inside the speaker. When properly tuned, a passive radiator can be very effective at reproducing the low frequencies commonly associated with high powered subs.

I was quite impressed with the capabilities of this iteration of passive radiators. They really do seem to adequately fill the need for low end without over driving the bass. I have been underwhelmed by this approach in Bluetooth speakers in the past, finding fault in the inability for the low end to maintain its presence at increased volume.

I would suggest that all of these speakers suffer from this at peak volumes, to a lesser degree than I expected, and for the strong majority of listening you’ll probably not notice it. I would also point out that the smaller the speaker; the quicker the drop off happens.

Each of the speakers features some sexy LED lighting that wraps around the grill. It is very aesthetically pleasing, and really completes the look of this line. The upper models take the lighting up a notch with the XB30 adding some white strobe-like lights on the outer edges of the drivers, and the XB40 further adding a super cool white light on the drivers themselves.

The lighting effect on the XB40 cones is brilliant, and something I would suggest other manufacturers will see and follow suit. My favourite combination is the LED strip around the grill and the white light on the cones; it looks super classy. I’m not sold on the bright strobe lights, but there are options, such as “rave” or “chill” in the app that allow you to control set it to your liking.

These are all water resistant!

Another major win with this line is the fact that they are all water resistant. That doesn’t mean you can drop it in the hot tub and have it work after, but it does mean that it is able to withstand rain, the odd spilled drink, and even a stream of water that has a 6.3 mm diameter, from any direction, at a distance of 3 meters, sustained up to 12.5 liters per minute, for upwards of 3 minutes and remain functional. If that seems oddly specific, it’s because it is. In what was a bit of a revelation for me, there is actually a standardized model that is used to determine a degree of protection from water. We definitely live in interesting times.

Setting up a wireless speaker chain in your home is a great way to have music everywhere you are. Rather than picking up your Bluetooth speaker and moving it from room-to-room, you can setup a group of speakers to all output the same music simultaneously. Syncing multiple devices used to be the exclusive domain of Wi-Fi enabled speakers. With Sony offering syncing capabilities of up to 10 devices over Bluetooth, complete immersion of your favourite tunes all over your home, without eating into your home wireless network bandwidth, is a new reality. The same model speaker can also be paired and used in stereo mode.

I’ve mentioned it many times in the past, and I’ll say it again: Lithium Ion is far and away the gold standard of rechargeable batteries. They hold their charge for months when not in use, there is no muscle memory impeding complete charges, and they provide exponentially more use time per charge than their lesser cousins. The XB20 takes a couple hours to charge, and provides 12 hours of listening time. The XB30 and XB40 takes 4 hours for a full charge, and provides a whopping 24 hours of listening time. Download the free Sony Music Centre app, and it will walk you through how to setup the speaker. Sure, you can simply connect via Bluetooth and start playing music in a matter of seconds. However, the app really opens up the possibilities of these speakers, allows you to add and group speakers, has a six band EQ in the larger models to make sure the sound fits your ear, and gives you control over the lights.

How do they sound?

The look and feel of a speaker is one thing, and it goes without saying that Sony has nailed that. That said, if a speaker doesn’t sound good, what’s the point?

I can tell you that each of the three speakers reviewed here sound really nice. The EXTRA BASS feature really rounds out the range and provides surprising clarity to the lower end, where most Bluetooth speakers this size fail. There is crisp treble, and the overall fullness of the sound increases as you move from the XB20 to the XB30 and XB40.

I found that the XB20 was sufficient for smaller rooms around the 10’ x 10’ range, including the home office or bathrooms. The XB30 held up in larger bedrooms, and the XB40 produced good quality sound in my open concept kitchen/living room. All of the above are great options for the beach or camping, and with the water resistant quality, these should definitely be enjoyed outdoors.

There are so many choices when it comes to Bluetooth speakers, finding ways to differentiate your product while advancing technology can be a challenge. Sony has tackled that challenge head-on, and produced some really nice sounding, great looking options with this line.

All three models are available at Best Buy. 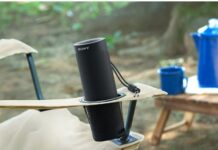 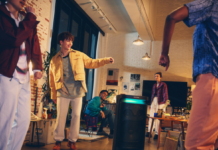 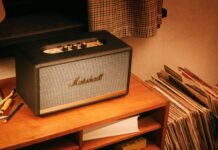