Home theatre has two main elements: picture and sound. For many of us, however, the reality of our homes and lives means that a dedicated theatre space remains out of reach. Enter the “media room”; it’s the hip new phrase that’s used to describe mixed-use spaces that lean towards consuming media – music, movies, TV, and video games. These spaces have to have TVs that look good on screen, sound systems that sound great and can fill irregular rooms, and the whole package has to be presentable because if, like me, you live in a condo or have the media room in a high traffic area, super-visible tech isn’t really desirable. Enter the Sony XBR-55X850D 4K HDR LED TV and the Sony HT-NT5 Surround Soundbar System. Are they what you’re looking for to meet the above goals? Read on to find out. 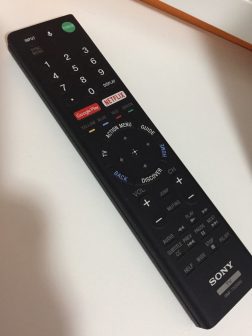 My challenge is that in my space I already have a beautifully mounted 70” display with a soundbar and surround speakers; I’m not going to pull it off the wall to demo a TV for a week, so the X850D joined me in my hobby room…which oddly enough was built to support an extra television. The TV and sound system arrived in three boxes from Best Buy; it’s clear that this TV has made the rounds through media and merchants, and while the unboxing experience was unceremonious (it’s quite unexciting when someone else has managed to get there before you) what I found inside was quite impressive. 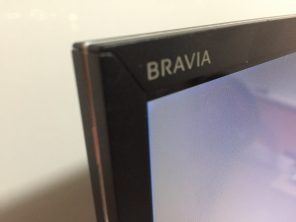 Really, I shouldn’t be shocked, but having grown up through an era rear-projection CRT televisions but the X850D is thin. It’s the fourth television to hold the XBR-X850 name, and the first to include both 4K and HDR out of the box. In the box you’ll find the remote, the stand, a back cover, and two metal legs that make the stand work. It took me half an hour to find them as they’d be tucked away in this repacked box, but you should have no trouble finding them.

You’ll need a Philips screwdriver to assemble the stand, but it’s easy enough to do with only one person. Should you opt to wall-mount the X850D you’ll use a 200×200 VESA pattern mount or adapter. Flush-mounting this TV will make it look it’s best…but you may find that you’re going to have a hard time accessing some of the ports (such as component and optical) in the back depending on the mount. An in-wall back box can help alleviate those issues; you can find them at specialty stores, and they’ll give you some additional space to work with for your cabling. 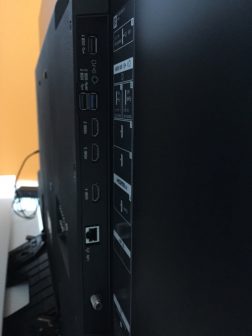 There are four HDMI inputs, 3USB ports, an optical port and an ethernet port. On the side of the unit you’ll find three of those HDMI ports and all of your USBs along with the ethernet port; it’s important that these are here because they’re the ones you’re most likely to use.

For those with Sonos or other soundbar solutions, yes this does pass Dolby 5.1 over optical. The X850D is capable of HDCP 2.2 and meets the full bandwidth HDMI 2.0 spec that is suggested for HDR. It’s HDR 10 compatible, but does not support Dolby Vision. Yay to unratified standards…seriously HDR people, it’s time to get your act together so that consumers don’t have to choose.

This is a smart display powered by Android TV; it has the usual suspects—Netflix being the only one I really care about. You can download stuff from Google Play to use with this TV as well; I didn’t test this feature out, but I imagine it will work just as well as any other.

I’m not going to get too deep into sound quality on this panel because I’m reviewing it with the NT5 Soundbar, but to address it quickly: the sound quality is acceptable but not great. Sound requires resonant cavities and/or sizeable drivers to sound good; this display has neither. If you’re looking for average sound results, this TV will satisfy you. Otherwise read on to the NT5 portion of this review.

Picture quality is another matter. I took the time to calibrate the display to fix some white point issues, and then connected my Xbox One S to check out HDR. Performance is good across the board; colours are rich and contrast is deep. The display supports both 1080p and 4K at 60Hz and 1080p at 120Hz. At 1080p with motion interpolation turned off the input lag wasn’t noticeable; stepping up to 4K with HDR did increase that lag to a point where I could feel myself compensating by reacting differently than I do on my current gaming TV.

But that picture quality…wow. It’s great; HDR is something that I truly believe is a reason to upgrade for, and play Forza emphasized that to be. Areas where detail would have been blown out or muddy now shows a real-world clarity that can’t be beat. I also tested out the Batman Vs Superman Ultimate Edition in 4K HDR and found the effect even more pronounced. While the movie isn’t much to write home about, the visuals are stunning.

This isn’t the best HDR panel I have seen, but I can say that it is well above average in performance and may actually be one of the best in its class. The mixture of excellent Sony aesthetics and solid HDR/4K technology here makes this one easy to recommend.

Sound Off – the Sony HT-NT5 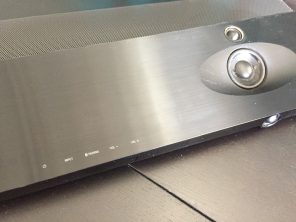 The NT5 is a good looking sound system, whether you have it on a stand or you’re wall-mounting it, but let me be clearly: this thing looks way sexier if you wall-mount it. It’s a 2.1 system that comes with a soundbar that, when you add two optional wireless satellites, becomes a full 5.1 surround system.

Sound quality is the upgrade that you’re looking for; it’s rich throughout a full range of frequencies, and when you add the surrounds it turns the set into a smart setup that rivals some component audio systems.

The unit supports both Google Cast and Sony’s proprietary SongPal Link, as well as Spotify Connect. Quite frankly these multi-room systems still fall quite short of Sonos in usability, but they’re getting there.

The combination of the X850D and the HT-NT5 is pretty much the perfect solution for media room people. You get a slim, sexy TV with state-of-the-art colour and resolution technologies. You get great sound that looks good. And you get wireless rear speakers that round out the surround experience. It’s a smart solution for the price, and I give this set a thumbs up.