Google recently announced it was updating its Chromecast platform, and expanding the line, adding an Audio streaming device to its current TV lineup.
The device got a new look, morphing from a straight stick shape, to more what you could call a “floppy disc”, which will better allow it to lay flat behind wall mounted TVs, while the addition of the new Audio device allows you to turn older speakers into ‘smart’ speakers easily.

Recently Best Buy sent me samples of the brand new devices to test and give my honest opinion. We’ll look at the Chromecast TV version first, then the Chromecast Audio.  For the verdict on each skip to the bottom.

What is Chromecast TV? What does it do?

Very simply, Chromecast TV is an external streaming device that will allow you to play internet video content on your TV. It lets you stream video directly from apps onto your TV.

Chromecast TV is quite easy to set up. You just take the small disc, and plug it into the back or side of your TV, wherever your HDMI ports are. (What’s HDMI? “High-Definition Multimedia Interface” is a connector in devices like TVs or stereo equipment that allows the transfer of audio and video data.)

Once the Chromecast is plugged in, you download the Chromecast TV app for your smartphone or tablet, and follow the instructions. You’ll need to set up an account, or use an existing gmail account.

The first attempt I made at set up it seemed like the app was frozen. After half a dozen tries to get the device set up I pulled the plug, shut everything down and left it for a day or so. When I came back and got everything turned on again and plugged in, I launched the set up option within the app again, and everything went just fine, and I was ready to cast in no time.

Instantly I was able to log in to my Netflix account and watch TV. To watch any TV, you need to download apps (in this case they act like “channels”) and then surf for and play back video from these apps. There are many apps to choose from, like YouTube, UFC.TV, or Canadian streaming services like Shomi, CTV GO, or Crave. Once you have these individual apps/channels on your phone, pick a show and hit the “cast” button (image below left) and it will play out over the TV.   From there, your phone is your remote control.

One of the things I like about Google Chromecast is that it’s very easy to use and set up. It’s also the lowest price point of any streaming TV device, making it a great option for people looking to get started in the streaming TV game.

For me one of the major cons is lack of available content. When compared with something like Apple TV, where you can browse and purchase numerous individual shows, TV seasons or movies, Chromecast relies fully on third-party apps for content. Many of these apps are greatly unfamiliar, particularly to adults over 45 years of age. Want to watch “Crunchyroll”? I didn’t think so. But since the big two apps, Netflix and YouTube are there, and those are the ones most people want to watch, I think folks will be satisfied.

Casting from your computer or laptop

One way to boost the amount of available content for Google Chromecast is to use your computer to find available videos from any source on the web, then cast them to your TV using the Chromecast device. You’ll need Google’s Chrome browser to do that. I’ll write up a separate set of instructions for this and post in a few days so you can try it, but it’s easy, and convenient and can allow you to watch virtually any video on the planet, whether or not they make a special video app. And this is something not so easily done with competitor Roku Streaming Stick, for example, which requires you to use a third party service called Plex to carry out this same task.

One of the other nice features about Chromecast is that it will turn your TV into a beautiful photo portal when it’s not being used. Chromecast defaults to a gorgeous screen saver and clock display when not in use, and while the default is lovely, this feature is also customizable, meaning you can display your own photos or select from an array of other options. Just go to the Google Chromecast app and select the “devices” tab. Then click on the gear in the upper right corner. Select  “back drop”.
To be able to customize this feature, you must sign in with, or create a Google account. Once signed in you can select playback of photos using Google, Facebook, Flickr, and even select weather forecast preferences. You can even ask your Google Chromecast to share news and magazine headlines and imagery from around the world, though I found these headlines much less newsy and more feature-ish. Even so, it’s a great idea, as it turns your TV screen into a full information portal.

Using the Chromecast as a guest
A nice feature of the Chromecast TV is that it’s easy for other people to play things using your Google Chromecast. Guests can download the Chromecast app and then access the device by putting in an on-screen pin number, meaning kids, spouses or visitors can all use the device, without everyone needing to get their hands on your phone to do it.

I had a little trouble at first understanding why someone would want an audio device like Chromecast Audio. After all, so many people own smart speakers, whether portable mini, or larger and better quality like Sonos or Bose, why add another smart component to your already smart speaker? Turns out the Chromecast Audio is not for you.

What is Chromecast Audio? What does it do?

In essence, Chromecast Audio is a bridge that connects “dumb” stereos or speakers or components to smartphones, allowing you to stream music using Wi-Fi to what are probably the best speakers in your house, even if they’re older, all without the need to “pair” devices each time.

Chromecast Audio is intended to connect any device without an HDMI port (which the Video version services). You can instead connect Chromecast Audio in a few different ways; using the mini audio jack (or “aux in”), a stereo RCA cable, or an optical cable (sold separately). This also allows the Chromecast to connect to a receiver or processor easily, and you can even connect it to your TV’s sound bar.

You’ll want one of these if you are a stereophile, or have older speakers you don’t want to give up, but you still want to be able to listen to your digital music collection on them. You will NOT want one of these if you’re partial to Apple devices, since iTunes (including Apple’s new Music streaming system), isn’t supported, meaning you can’t stream that or your Apple Music library using your iPhone or iPad. Being a Google product, this is obviously meant more for the Android crowd.  However using my iPhone, I was still able to stream music using other services like Spotify, NPR and Tune-In internet radio.

Using the device is easy, just like the TV version. Simply load up the app you want to stream audio from, select which Chromecast Audio device you want to use (necessary if you own both the TV and the audio versions of Chromecast, so it’s helpful if you actually give the devices meaningful names) and hit “play”. In seconds, music is pumping from your speakers. While I don’t have any older speakers to test this with, so I used a small portable Jawbone Mini Jambox, just to get a feel for the setup, configuration and overall workings. Yes, this makes each device redundant, but it’s all that’s available to me for testing.

I thought the system as a whole worked well, but it’s worth knowing that you’ll need to plug your Chromecast Audio into an AC power source in a nearby wall, so you’ll need a free outlet or space on the power bar to do that. I also thought the system was a bit “cordy” while I was testing it; you need to connect the input  cable to the Audio disc, and then connect the AC cable too. Sitting out on my coffee table it was a bit messy, but if you’re using this as Google intends, all your cords will likely be tucked away inside a stereo cabinet or behind your components, so who cares, right?

This device is super useful for someone who wants to bring their older equipment into the current century, without having to buy all new speakers and components, and as far as I know, this cheap little device is one of the only options on the market. At this price point, it could even spell trouble for companies like Sonos or Bose, since anyone who was thinking of upgrading to a great sounding speaker with smart capabilities, can now spend a fraction of that and still get the same effect.

I like this product, and while I don’t personally own old components that would most benefit from its use, I think it’s easy to use and a super smart ‘hack’ for those who do need an upgrade. The device is easy to set up, and there’s a good enough variety of apps, even for an Apple user, but one major con for me is that I’d be unable to play any of the music in my digital library using this device, since I’m an Apple customer. Overall, this device is going to give the most bang for buck to an Android user with an older speaker or stereo receiver.

I really liked Chromecast TV, despite the lack of compatibility and transferability between it and my Apple components. I love the new “floppy disc” configuration, which will more easily allow the device to hang behind wall mounted TVs, and I like the price point a lot too; for the dollars, I can easily add one of these to any TV in my house that I don’t want to spring for a (pricey) new Apple TV for, and in doing so I can still watch Netflix, which is one of my primary uses.
I also really like the fact that I can screen-mirror my computer to the Chromecast-enabled TV, simply by downloading an alternate browser (don’t most people have at least two web browsers, or is that just me?). This device is again geared at Android users, but Apple customers will still find plenty to like here.

Best Buy provided samples of the Chromecast TV and Audio for the duration of the review testing period. It did not ask for nor receive approval over the review content. 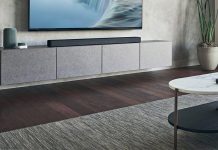