If you’ve been looking for a lighting solution for your gaming room or want to make movies and TV more immersive, you might have looked at the Philips Hue Play Bars. These smart, colour-changing light bars can mimic the colours of the lights to what is happening directly on screen. Previously the Philips Hue Play light bar system was designed mainly for computer gaming, but there was a way to hack this so the lighting effects played from your TV, though it was a bit of a process (read about the Hue Play Light Bars and my hacks in this review).

Since then, Philips has announced a new component designed to help bring smart lighting and special effects to your TV or gaming screen in a much easier way, using the Philips Hue HDMI Sync Box.

What is Philips Hue HDMI Sync Box, & what does it do?

The new HDMI Sync Box connects to your TV and lets you connect up to four external components and peripherals so you can personalize your Hue lighting experience and have it match what’s playing on the TV. Worth noting, you do still need a Hue Bridge (to connect to your home’s Wi-Fi network) and Hue smart lights like the Play Bars.

I wasn’t sure what to expect with this new device, but setup is surprisingly easy.

You just add the Sync Box as a new device and connect it to your Hue Bridge. But there are a few other steps, and a separate app needed.

For this review, I’m going to assume you already have Phillips Hue Play lights, and the necessary Phillips Hue Bridge, and have set these devices up already or connected them to your account.

How to set up Philips Hue HDMI Sync Box:

Depending on where in the room they are, whether that’s right around the TV or placed around the room, the effect may be of different intensity, varying colours, and some of the lights may not respond at all, at times.

It’s probably worth pointing out, but the Hue Sync effects don’t appear to work solely with the TV’s smart operating system. You need to have a third party streaming device connected into the Sync Box, like an Apple TV, Roku streaming stick, cable box, gaming console, or other. If you are just hoping to use this with the Netflix or YouTube streaming app that lives on your TV zone operating system, it seems that’s not how this works.

What does the Philips Hue HDMI Sync Box do?

The HDMI Sync Box is designed to get the Hue Play Bars, which are placed behind or beside your TV, to flash, morph, and match the colours of the video picture. Something inside the box reads the video signal from your external streaming device and tells the lights what to do.

For example, the Play Bars will light up the area around your TV, while any overhead bulbs will also adapt and change colours to the overall scene (as will any lamps or light strips too). Just imagine the scene of a major blockbuster action flick, and when a building explodes, your whole room lights up so you really feel immersed in the movie. It’s pretty cool.

The lights are quite responsive, and the effects are fast. In action scenes, it can actually be pretty dizzying when all the lights start going off around you.

I used these lights to watch a variety of programs over a few nights. The first night was a bit of a learning curve, getting everything the way I wanted it and making some adjustments.

The next day I put on a movie and the lights stayed synced for the duration, matching things nicely.

You can adjust the brightness, intensity, and overall theme of your lighting effects using the Hue Sync App. You can optimize for Music, Video, or Gaming.

There are four levels of intensity; we started at the highest level (with my husband’s reaction being, “this might be seizure-inducing”) and then dialed it back a bit from there.

The Hue HDMI Sync Box will go into standby if it falls out of use for a while, so you may need to turn it on again to start up your sync.

In short, this box does what it says, but it does have some limitations. For example, the lights match up to the video quite well and create a room-filling effect. But the box doesn’t work with my smart TV alone; you need peripherals connected through the box. Even so, it works great and provides a much easier way for your lights to work with your TV than the previous setup that involved routing streaming through your computer, or air play. 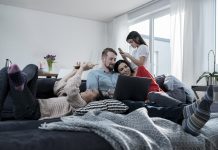 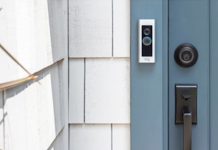 Before you book a vacation, boost your security with new smart home tech 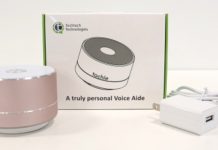