, it was a growing group of high-quality, low cost home automation products that you could control from your Smartphone. Home automation is all the rage right now, and is definitely making our lives easier, and much more interesting. Dying are the days of those crank timers my grandparents used to set their lamps to, and rising are the idea of plug-in switches that we can control with our smartphones. Belkin is one of those companies helping us do that and it’s time to give a bit of a product update.

My review last fall consisted of three of their products, and in the end, I found myself using one over the other – The Light Switch. Why did I favour the light switch over the others? The room we originally installed the switch in was a spare room where I kept all my clothes and we had our home library. However, my wife was 20 weeks pregnant at the time, and we decided shortly after to make that the baby’s room. Since Charlotte was born, it’s been a great help for making sure the room’s lit in advance of me bringing her in there and having to fumble with a light switch while I’m carrying her.

In addition to these WeMo products Best Buy previously carried: Recently , Belkin also said they were going to enter the smart bulb market and were even going to enter the Crock Pot market, allowing you to set temperature and monitor cook times with your smartphone. As a slow cooker fanatic bent on creating the best roasts, pulled pork, stews and chilis possible, I can’t wait for this to come out (as if I needed more method to my madness.)  Belkin didn’t quite specify an exact release date, for the crockpot and light bulbs, though I hope they will be released soon (more on that at the end of this article.)

Belkin’s recently made some strides with the WeMo App itself too with their Version 1.5.1 update and many of those changes affect the light switch. Now, more then ever, you can change up the way you’re using your WeMo products.

You can customize more features around dusk and dawn, and the new “away” feature allows you to create more diverse rule sets around how you want your light switch to function while you’re away from home.  If you’re also unhappy with how brightly the standby lights on the switch itself are, you can also adjust them, right from the app.

Perhaps the most interesting facet of the upgrades is with the IFTTT (If This Then That) website interactivity. While there was IFTTT recipe ability before, it’s now integrated into the app and there’s now the addition of the “long press” feature. This allows you to select a form of interactivity (such as a text message) when somebody manually presses the switch for more than 2 seconds. This is new in addition to any other recipes that you may have set before.  As always, be sure that once you’ve installed your Wemo Light Switch (or if you have one already,) you update to the latest version of the product’s firmware. This was really problematic in some of the old versions, and the devices would often fall out of sync with the software, and result in you having to expend a lot of effort just to make it work again (since the hardware assumed it was already linked to the software and wouldn’t generate the find signal for it.) This has been fixed, however, and I’m no longer wary of the dangers of updating the firmware.

1.5.1 isn’t the latest version, however. Version 1.6 was just released May 19th, though the changes aren’t as drastic. While getting all the features I described above, it also contains functionality for the WeMo Crock Pot, the upcoming WeMo maker and some bug fixes.

Check out the full range of Belkin WeMo products available now at Best Buy and online at Bestbuy.ca 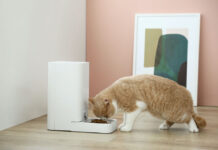 Pet tech for finding and feeding your dogs and cats