Mobile electronics like smartphones and tablets are great, but it doesn’t matter who makes them, they all share one weak spot: the display. That big, bright screen is prone to scratches and with touch operation, it’s a magnet for fingerprints. Annoying as they are, the smudges can at least be cleaned off, but once your display is scratched, it’s scratched. The only real option you have is to replace it —and that is an expensive proposition. The ZAGG Invisible Shield Glass is an ultrathin slab of tempered glass you apply on top of your display for complete protection against scratches and resistance to fingerprints. I tested out versions for the iPad Mini with Retina Display and iPad Air and ZAGG Invisible Shield Glass is now on my must-have list for future device purchases.

The iPad Air and iPad Mini with Retina Display are known for their big bright displays (yes, even the Mini has a relatively big screen). All that glass has a downside though, and that’s scratches and smudging. Fingers have oil and touch controls mean that looking at your tablet in the right light can be a shocking revelation. Throw kids in the mix (not all those smudges are oil) and it’s even worse.

More serious are scratches. Those big slabs of glass are pretty hard, but throw a tablet into your backpack, purse or even carry it around for casual use and scratches inevitably begin to appear. At best they’re annoying and detract from the finish of your tablet. But collect enough of them or get a deep one and the scratch can actually impair your use of the device by distorting the display.

ZAGG has a long history as a high quality supplier of smartphone and tablet accessories and a particular expertise in screen protection.

Invisible Shield Glass (coming soon to Best Buy) is the company’s latest and highest quality protection. It’s not a plastic cover for the display, it’s a 0.4mm thick sheet comprised of a screen protection layer, a fortified scratch-resistant tempered glass layer and topped with an oil-resistant nano coating.

The result is a protective cover that takes nothing away from the display beneath it. It’s completely transparent and so thin that touch functionality is not impaired in any way.

With something as large as a tablet, installing the Invisible Shield Glass does take a bit of care. You want it to be on straight and you want the display beneath to be perfect —no dust, smudges or fingerprints— before committing to having the cover affixed. It can be removed and ZAGG says the adhesive is good for a second attempt if things don’t go as planned at first, but if you’re careful, it should be a one shot deal.

Here’s the package contents along with my iPad Mini with Retina Display. 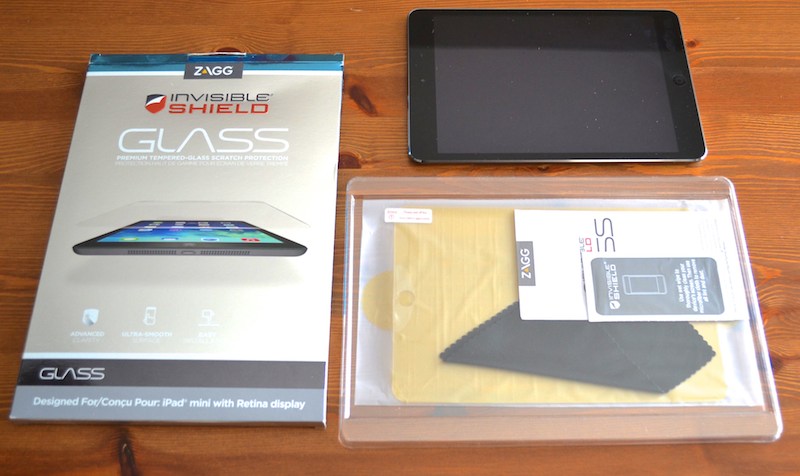 The first step was to thoroughly clean the iPad’s surface using a wet cloth included with the ZAGG Invisible Shield Glass. Once it was clean, a lint-free cloth (also supplied) was used to remove all dust and smudges. 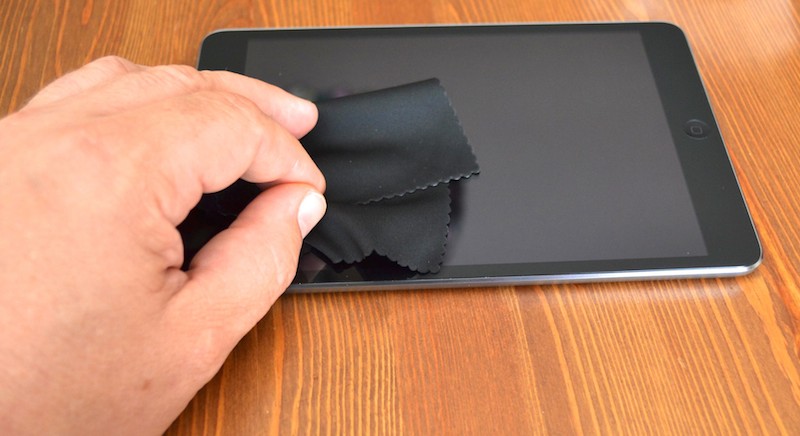 Think it’s clean? I’d suggest giving the iPad a quick once over using a flashlight. That will make any spots you missed stand out —better to do this now than have the cover on and decide a speck of dust you missed in the middle of the display is intolerable. 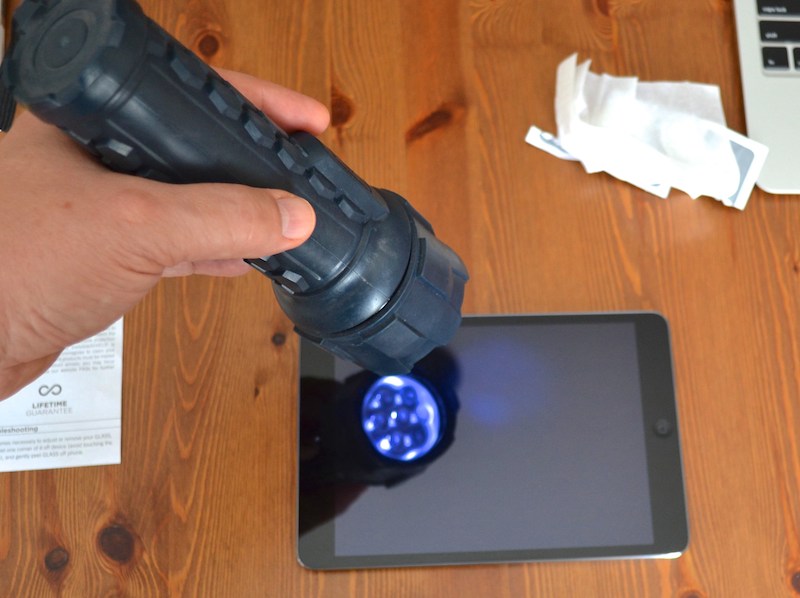 Next, remove the protective sheet from the adhesive side of the Invisible Shield Glass. Being careful to only hold it by the edges, position it over the iPad and manoeuvre it into position. Turning the tablet into landscape mode may be easier and remember to use the Home button cutout as a guide. You can nudge it slightly to adjust the position if you act quickly.

The Invisible Shield Glass has its own adhesive layer that will begin bonding to the iPad’s display (don’t worry, the adhesive won’t damage it). When you’re happy with the position, use the included tool to push any air bubbles out to the edges. This takes some patience, especially with the larger iPad Air. If you’re not certain whether you have bubbles or not, you can peel back the yellow protective film to look. You’ll see them as white spots (circled in red on the photo). Make sure to replace that protective film if you have more air bubble removal to do —you don’t want to risk scratching the new protective glass. 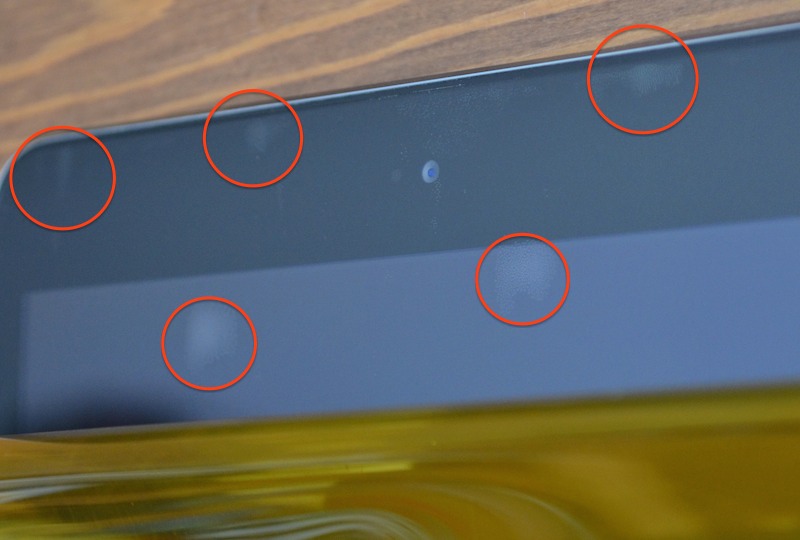 Once finished, remove the film and your iPad is ready to go. 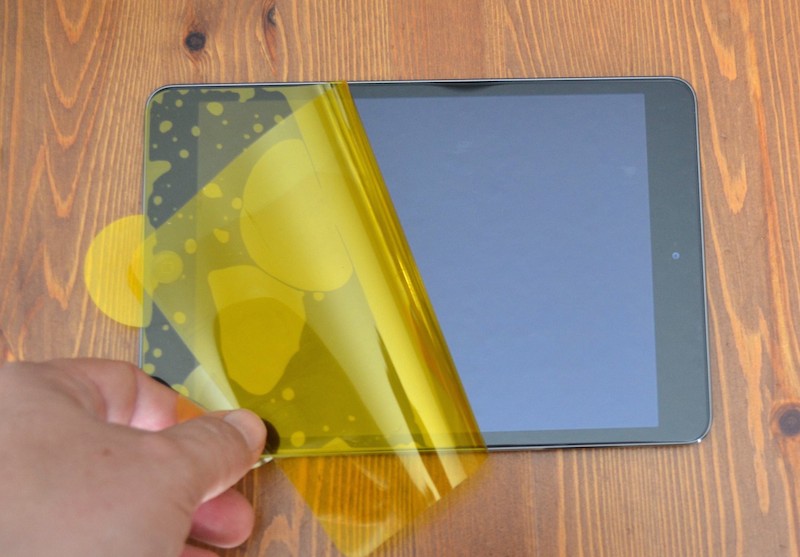 I couldn’t be happier with the ZAGG Invisible Shield Glass. It’s so thin it truly is invisible and the high quality glass does not detract from brightness or sharpness. As advertised, it doesn’t interfere with touch operations and it also doesn’t impact use of magnetic closures if you still want to put your iPad in a protective case that supports Apple’s Instant Wake feature.

The finish is also high quality, with tapered edges and a nice polish so it won’t be catching on anything. The Invisible Shield Glass doesn’t look or feel cheap and doesn’t make your iPad look as though you’ve plastered a sticker on it. To my eye, I can’t really tell that the iPad has been altered in any way.

And yes, fingerprints have been less noticeable and easier to wipe off since I installed the Invisible Shield Glass. Will that anti-smudge nano coating last forever? I can’t tell you that, but it’s certainly an improvement while it lasts and if it does eventually wear out then I’m no worse off than before.

But the best part of the ZAGG Invisible Shield Glass is that the sheet of removable glass takes the beating your tablet’s display would have absorbed. It’s scratch-resistant tempered glass itself, but if anything ever gouges it badly enough to be distracting, you simply peel it off, clean off any residue from the adhesive and your iPad is still as good as new. Without compromising the quality of that Retina display.

Watch for the Invisible Shield Glass to be at Best Buy soon, joining an already extensive selection of ZAGG tablet and smartphone accessories.