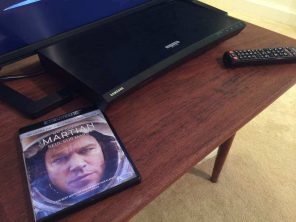 4K has been the biggest revolution in TV in years, but although the technology is breathtaking, without proper 4K content to watch, people have been slow to embrace it. (What’s 4K? Read up on it here.)

That’s changing, since many more TV stations, streaming companies and manufacturers are now putting out 4K-ready content. Samsung is one of the first to offer a 4K Blu-ray player which, when used with a 4K TV, gives you incredible resolution, gorgeous colour and adds a whole new depth to movie night.

I received the Samsung UBD-K8500 Ultra HD Blu-ray player to test and review. The kit came with two movies to watch, so while I would have liked a much more in-depth test, I’m making due with a short trial.

Who is this disc player for? 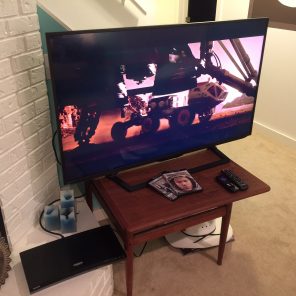 I should say at the outset, this product is for someone who’s beginning to, or about to embrace 4K/Ultra HD technology. This means you’ll need a 4K TV in order to get proper use of this Blu-ray player. (I tested mine with an Insignia Roku 4K LED TV. Read a full review of the TV here.) You’ll also need 4K content in the form of web streams (like Netflix or YouTube) or 4K discs. If you aren’t going to upgrade your TV for a while, this device may be too far ahead of the curve for you, but with that said, if you do upgrade in a year or two, you’ll be ready if you invest in a 4K disc player like this one now.

Set Up & Basic Use

The UBD-K8500 Ultra HD Blu-ray player was very easy to set up. It’s quite literally plug, and play; just connect power and an HDMI cable, pop in a disk and you’re ready to go. One thing when you’re getting it set up; don’t make the excited rookie mistake I did. In the rear of the player are two HDMI ports, and only one of them is a video out. Make sure to hook your HDMI cable to the correct one, or you’ll only get audio and no picture.

Because so many of us are still viewing HD content, the Samsung Ultra HD Blu-ray Player can handle both current disc technology, and 4K. With this device you can play old music CDs, DVDs and Blu-ray discs plus brand new UHD or 4K discs. That gives you some versatility, which I appreciated. 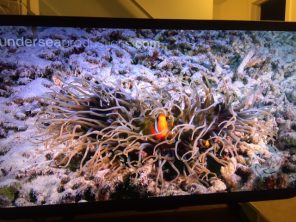 I tested this disc player with a 4K TV; the Roku Insignia 4K LED TV. I also had two 4K/UHD movies to test this player with; The Martian and Now You See Me.

Right out of the gate the picture is leaps and bounds better than regular HD, and light years from the SD TV I often watch in my kitchen.

In 4K, lines are sharp, colours are more vivid, there’s almost no motion blur, and the whole video screen just looks more realistic. I liken it to looking out an open window, compared to looking out a closed one that has a screen in it; sharpness, detail and colour are all much more vivid in 4K.

The UBD-K8500 Ultra HD Blu-ray player was easy enough to operate; there’s just four buttons on the front of the curved machine; eject, stop, play/pause and power. The remote control is similarly easy; there’s not really any fancy features, and the whole system works just as you’d expect.

The Samsung UBD-K8500 Ultra HD Blu-ray player has several additional features, for those of us who think disc playback alone is a waste of a device. 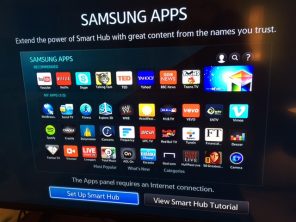 This Blu-ray player has smart streaming functionality built right into the unit. It will also allow web surfing, and multimedia playback. These functions are accessed through a main menu screen, and you’ll need to set up the Smart Hub system, as Samsung dubs it, after first connecting to your home’s Wi-Fi.

The device displays a message that says the more I use my Ultra HD Blu-ray player the smarter it will get. I’m not sure what that means, and don’t think it will be able to help me in the short testing period, so for now that’ll have to remain a mystery.

There are three portals in the smart menu: Play Disc, Multimedia, and Samsung Apps. Once you get connected to Wi-Fi, the Samsung Apps section is like your streaming TV service; the player will add popular channels like Netflix, YouTube, The Movie Network, CraveTV, Discovery Go, CTV Go, TSN Go, The Weather Network, and more. You can then choose additional apps or channels to add as well. Each of these would be accessed using a separate login, and in some cases a paid subscription. 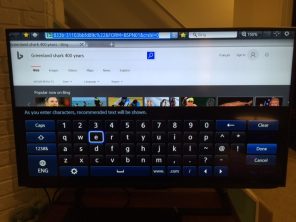 Surf the web? Not if you value your sanity

The Blu-ray player also has a built-in web browser, though I think any normal human would go mad trying to use the four cursor buttons on the remote to navigate webpages or trying to use the onscreen keyboard to peck out Google searches. You can watch my video review to see how it works.

The Multimedia function will play content from a USB storage, or network device such as Plex. With the world as wireless as it is now, I never use this function, and don’t get why it’s still offered, but you have it if you need it.

The player also features 4K upscaling which can improve the look of your older discs. Samsung writes on its website that this will give you, “crystal-clear images with 4X the resolution of Full HD.” As I didn’t have any older discs on hand (I’m fully wireless as I mentioned) I didn’t test out this feature.

Now we’re talking! My wireless world revolves around streaming and using The Cloud, so screen mirroring capabilities are right up my alley. Sadly, as an iPhone user, I was disappointed to find that this device is not compatible with iOS devices from Apple. Sigh. 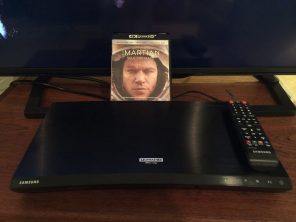 I enjoyed the experience with the Samsung UBD-K8500 Ultra HD Blu-ray player. It was easy to use, and I like that it has smart capabilities built in so an extra streaming device isn’t necessary. It’s disappointing that I can’t use the mirroring functions but I guess that’s what I get for choosing Apple over Android.

I thought the web browser experience was abysmal. It would be made better by improving the remote control; sticking a keyboard on the back and by having a tiny trackpad somewhere on the remote, or going all the way and integrating voice commands into the remote. As it is, you couldn’t pay me enough to surf the web using this device.

The quality of this 4K UHD player can’t be overstated; it allows you to really dive in and get the most from your 4K TV, and the video quality is really amazing.

This Blu-ray player is for someone who has a 4K TV and wants to start enjoying 4K content on a more regular basis, or for someone who will be making their next TV purchase a 4K/UHD model. Given that your options for 4K disc players are limited right now, it’s a good thing this one is a solid choice.