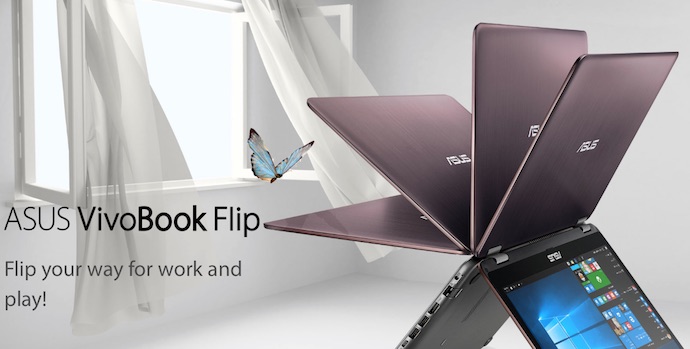 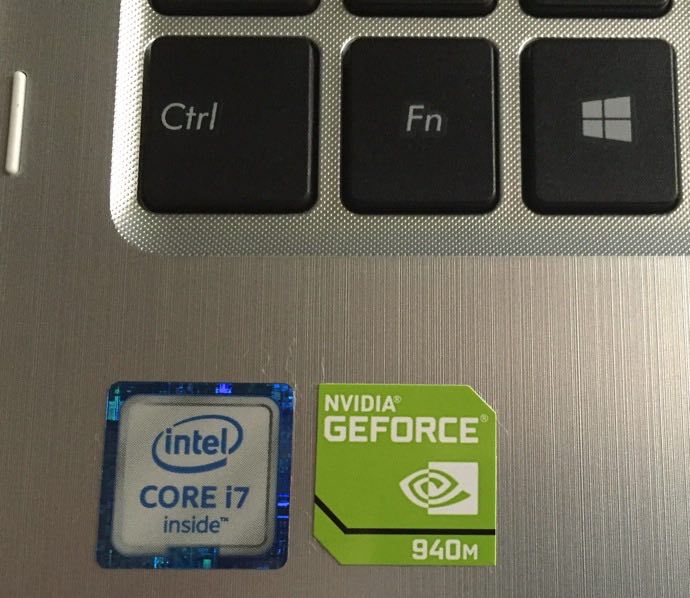 Hands-on With the VivoBook Flip TP501U

Out of the box, the ASUS VivoBook Flip TP501U is an attractive laptop. It’s big, but fairly thin and the top cover is made of grey metal and finished in an attractive brushed look. Open it up and the inside deck also sports a brushed finish (in a contrasting silver), but in this case it’s plastic. There is also a full-sized keyboard and a big, 15.6-inch, Full HD touch display. These decals were also prominently displayed and with good reason: an Intel Core i7 CPU (using the latest Skylake architecture) along with the Nvidia 940M video card make for a potent performance combination.

After starting up the VivoBook Flip and going through the set-up process, I was reminded once again that simply reaching the Windows Start menu does not mean a new laptop is ready to use. Operation seemed much more underwhelming than I was expecting, but checking Windows Update revealed a series of updates to be installed. This added another 30 minutes to the setup time, but I was rewarded with the expected performance as well as the latest security measures.

Once everything was optimized, the ASUS VivoBook Flip TP501U proved to be a very capable laptop. The Full HD display has the resolution for text and numbers to be crisp when using productivity software like Microsoft Office and it’s large enough that you can get a lot of them onscreen. Or multiple windows. The keyboard is responsive and excellent for typing and the touchpad works well. My only issue was getting accustomed to the under-sized left SHIFT key. If keyboarding isn’t your thing, the display offers multi-touch support, so you can simply poke, tap and zoom your way around. 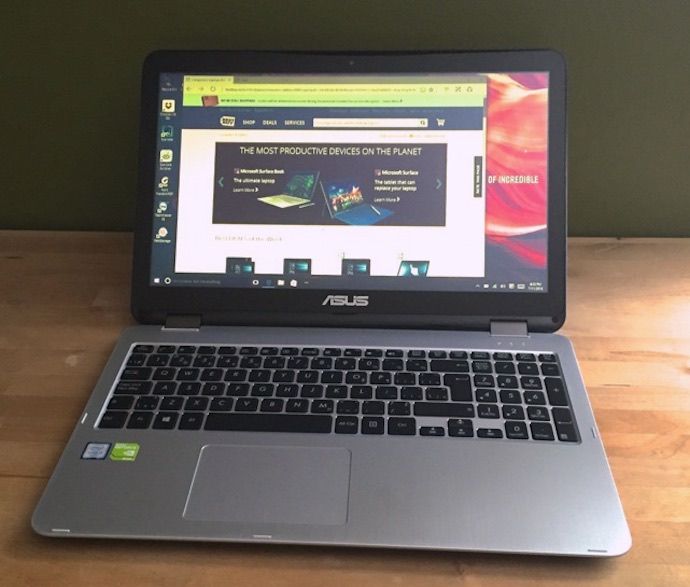 There’s plenty of storage thanks to the 1TB hard drive and the generous 12GB of RAM means you can have multiple applications and many windows open simultaneously without hitting a performance bottleneck. Most laptops in this price range tend to ship with 8GB—and share that RAM with their integrated graphics—so the ASUS VivoBook Flip TP501U has a real advantage there. There is also a full complement of expansion ports, including the latest USB-C port.

Of course the star feature of the VivoBook Flip is its namesake ability to flip the display 360 degrees. This lets you use the VivoBook Flip is a wide range of form factors, including the traditional laptop, a stand, tent or even as a tablet. A very large tablet, mind you, but the point is you can do it if you so choose. When using a device that puts so much pressure on the hinges, durability is a concern. I found the hinges seemed very solid, they offered enough resistance to keep the laptop securely in any position I chose, yet still operated smoothly. ASUS says they’re made of a robust metal gear construction and tested to 20,000 cycles. 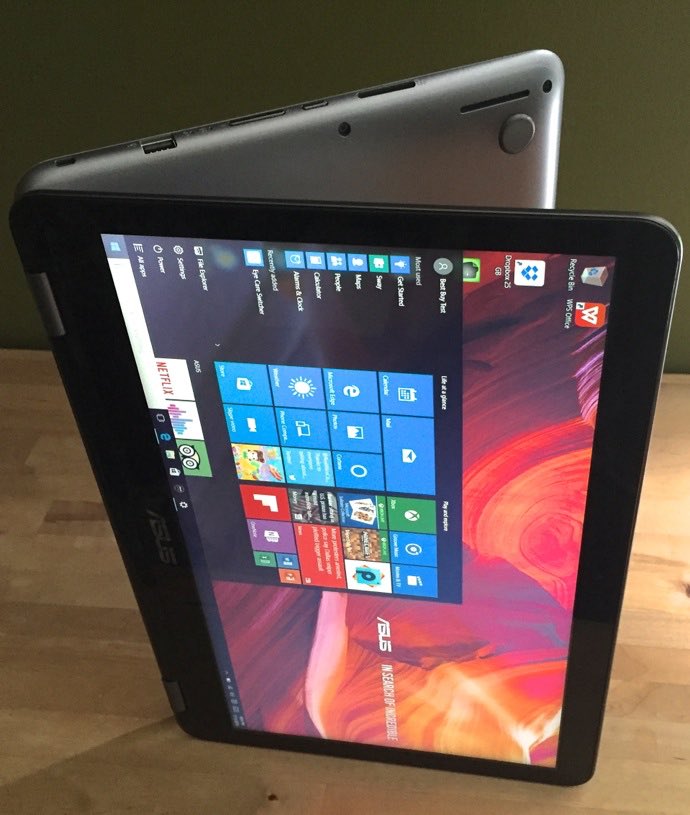 What Would I Change?

The ASUS VivoBook Flip TP501U is a pretty cool convertible laptop and for the most part, I enjoyed using it. However, it’s not perfect and there were several things that did bother me a bit.

The display is a TN (Twisted Nematic) panel, which is good for gaming because of shorter response times, but compared to IPS displays there is a lot of colour shift when viewing from angles. The VivoBook Flip isn’t a gaming laptop, but it is designed to convert into form factors that can have odd viewing angles, so the TN choice means sometimes having to shift the laptop around to get the best view. I’d like to see an SSD instead of a hard disk to speed it up, something that’s more or less expected in mid range laptops these days. Finally, the 802.11n Wi-Fi on my review unit provided wireless performance that was perfectly acceptable for web browsing or streaming HD video, but I’d prefer to see 802.11ac in new laptops. Fortunately, the lack of an SSD and 802.11ac can both be easily remedied after the fact if you want to upgrade later on (check out my step-by-step How To for instructions on upgrading a laptop to an SSD).

The ASUS VivoBook Flip TP501U is an interesting laptop. Its price puts it firmly in the mid-range, but it packs some powerful specs—particularly the Intel Core i7 CPU, Nvidia 940M graphics card and 12GB of RAM. With that kind of hardware, combined with a large, Full HD display, this laptop has the ability to be used for many professional and business applications. The convertible factor makes it extremely useful for mobile presentations, further supporting the professional aspect. 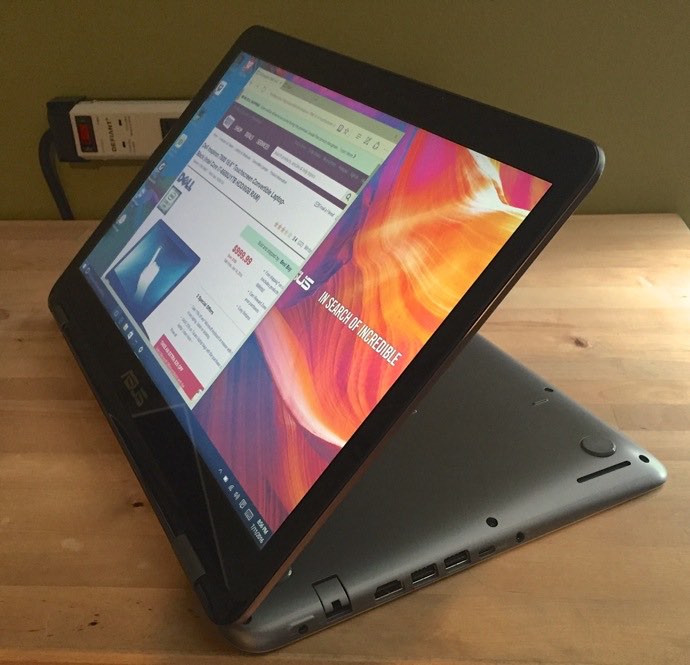 At the same time, the VivoBook Flip TP501U is not an incredibly expensive laptop. Its price and specs, combined with its multiple form factors, would also make it a great choice for students. It’s capable of mobile gaming (the Nvidia 940M should let it run many popular PC games with at least medium detail) and more than able to handle commonly used applications like Word and Excel as well as more demanding applications like video editing. The hard drive may not be the fastest, but the 1TB of storage it offers will hold a lot of music, movies, games and applications. Just as compelling as the capabilities is the convertible form factor. It may be large, but you do get a tablet form factor for drawing or taking notes. And the Stand Mode (combined with the SonicMaster audio) makes the VivoBook Flip TP501U a great portable movie system–perfect for cramped quarters like a dorm room.

The VivoBook Flip TP501U is just one of a collection of new ASUS laptops arriving just in time for back to school. Check out the others, like the ASUS X540LA on Plug-in to help make your choice for fall.