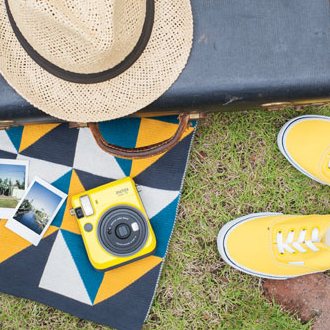 Did you know that you’re not supposed to shake a Polaroid as it dries? Yup, it’s true! Despite what you see in the movies, waving around a modern Polaroid does nothing to help it develop, and it can actually cause blobs in the image if you wave it around too aggressively.

The makings of the original Polaroid camera

Polaroid, founded in Minnesota in 1937, originally focused on making glasses, not cameras! They made only polarized sunglasses, ski goggles, 3D glasses, and dark-adapter goggles up until 1943, when founder Edwin H. Land first conceived of the instant camera.

The first Polaroid instant camera was sold in 1948, and by 1956, the brand had sold over 1 million of them. Instant cameras continued to gain popularity over the years, and when the Polaroid OneStep camera debuted in 1977, it became the best-selling camera (instant or otherwise) in the US.

An end of an era

But then, in 1992, Polaroid began to struggle to keep their audience captivated. They launched the Polavision, an instant camera and film system, which flopped due to the rapid rise in popularity of hand-held video recorders. They tried again a few years later with the PDC-2000, which (despite being one of the first digital cameras available to the public) failed to catch on. And finally, the brand expanded into film scanners and photo printers, but failed to get a foothold in a market dominated by Nikon and Minolta.

Nowadays, the only instant cameras on the Canadian market are the adorably square Fujifilm models. Polaroid, the classic film camera company of yesteryear, filed for bankruptcy in 2001 and passed through the hands of a number of other corporations over the years, until it eventually ceased making most Polaroid-branded cameras, photo frames, and mobile products. It had something of a revival in 2010, at the height of hipster culture (what? I’m a 20-something; I can be hip with the times!), when Australian photographer Florian Kaps bought out all of Polaroid’s remaining film stock and launched The Impossible Project, but even today, The Impossible Project only sells film for old Polaroid cameras. Sure, it’s film that’s a huge technological leap forward from the stuff they were making in the ’70s, but the Polaroid brand itself still sits perilously on the edge of its continued existence.

And now, on that wonderfully depressing note, let’s talk about instant cameras today! Make no mistake, instant film is very much still alive–just head to any birthday or holiday party held for hipsters under the age of 25 and you’ll see someone’s shiny (well, matte) new Fujifilm.

The death of the instant camera leaves for a bit of sadness and nostalgia when you stop to think about it, but it makes sense: in a world where you can pick up a digital camera for under $100, or just pull out your smartphone and instantly tap into a world of digital photos, filters, Instagram, and Snapchat, the instant camera ins’t your only option anymore for a photo with immediate results.

Over the years, instant cameras have been used for things like ID cards, unalterable crime scene photos, and lighting previews on film sets. Today, however, they’re very much a niche market; a way to not just instantly capture a photo of you with your friends, but to be able to hold it in your hands. As great as digital images are (and trust me; I love the ability to shoot digitally), we still live in a physical world, and owning a single digital photo frame just isn’t the same as having dozens of pictures of your life pinned up on your walls.

For an immediate memory that you can touch, people today are still turning toward instant cameras like the Fujifilm Instax Mini 8 Instant Camera Kit (pictured in this article is the shade Raspberry). The Mini 8 is the instant camera body that I see most often in public and with friends, and it makes taking “Polaroid” pictures easy and affordable. Run on two AA batteries and priced affordably, modern Fujifilm instant cameras are a far cry from the original Polaroid OneStep–the Mini 8, for instance, features auto flash, auto focus, a brightness dial, and colour film.

And the Mini 8 isn’t even where it stops. There’s also the Fujifilm Instax Mini 70 Instant Camera Kit (it’s pictured here in yellow), which has a sharper-edged body but still comes in bright, vivid colours. It’s optimized for selfies, with a mirror next to the lens to check framing, automatic exposure control and a high-performance flash (although really, any expert selfie-taker knows never to use flash unless absolutely necessary), but it also has macro and landscape modes, a self-timer, and a built-in optional filter.

For the ’70s throwbacks, Fujifilm also makes two cute, “conservative” models that are designed more like traditional film cameras. The Fujifilm Instax Mini 90 Instant Camera Kit is similar to the Mini 8, with colour film, auto flash and focus, and a brightness adjustment dial, and the Fujifilm Instax WIDE 300 Instant Camera Kit (which also comes in black/silver) delivers large film photos in an instant. The WIDE even comes with a close-up lens, and it’s great for catching the action at a party or school event.

Until I sat down to write this article, I had never really stopped to think about the death of the instant camera. To some degree, they still feel like a common object in everyday life (I guess they would have to, having sold literally millions of units not so long ago in the ’70s), and it feels strange to think that some day, kids will never have seen a Polaroid photograph in person.

Today, however, is not that day. Polaroid may be struggling, but the instant camera is kept alive with the Fujifilm Instax line, and I am happy to say that I still see kids pulling out their instant cameras when they’re out with friends. As wonderful and versatile as smartphones and digital cameras may be, they lack the magic of an “instant” photograph: their one-shot nature, their ability to provide a physical memento of a great moment, their little frame and scribbling space that just automatically make your pictures look cool.

And, hey. If you’re going to gently wave your Fujifilm photo around as it dries (because even if it doesn’t help them dry faster at all, it still feels like it should), I promise not be the one judging you for it!