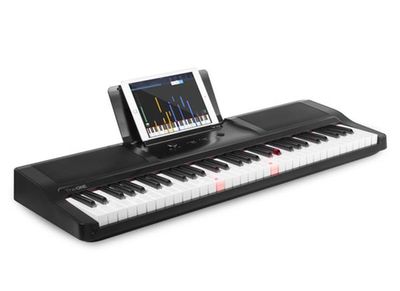 One of the many things I like about blogging at the Plug-in Blog is having a chance to check out new products. Sometimes it’s the newest model of a popular keyboard (like this). Other times it’s something that encompasses new ideas. In this ever-changing technological world, discovering these new ideas is becoming more and more common.

I have in my possession The ONE Light. It’s from a company called The ONE Music Group. I’ve been hearing about The ONE here. It’s a different kind of keyboard. Before I open the box, here’s some background research on the product.

The ONE is an interesting project. Driven by a desire to make music education very accessible using today’s technologies, The ONE Music Group offers a system that strives to challenge long-established practices in music education. Part of the expressed goal of The ONE team is to make music a lifelong passion for people. They want to get you hooked on playing music by making it easy for you to play your first song in minutes!

So how does it work? The idea is pretty simple. Via a connected iPad, iPhone or Android device (not included!). You’ll access video music lessons, download songs using specialized digital “sheet music,” and play music-learning games too. Download the Smart Piano App, and you’re on your way. Once you’ve got the connection, there are LED keys that light up on the piano, guiding you though the various lessons, songs and games.

The ONE Music Group has had success with this concept in China. Now they’re offering The ONE North America. Choosing a different path (perhaps inspired by their different path regarding music education), a crowdfunding campaign is the focus of The ONE’s media buzz. The campaign has been quite successful, and people are talking about The ONE and it’s new ideas. The ONE is coming soon to Best Buy, where you can find many cutting-edge products.

My version of The ONE Light. It’s smaller and lighter than The ONE, which is a full version. It’s time to open the box and get our hands on The ONE Light! …

Let’s start with a simple accounting of what you’ll find inside:

— The One Light 61-key digital piano

Overall, it’s a strikingly simple kit. It should be noted that a very important component, the iPad (or other device) is NOT included!

The ONE is easy to set up. Plug it in, and you’re playing immediately. However, this is much more than a piano, it’s a music education system. You’ll therefore want to download The ONE Music Group’s App. My advice is that you use a tablet over a phone device – the extra screen space is very valuable. Then, connect your portable device to the keyboard using the provided connecting cables. It takes a few extra minutes (or seconds). The setup is very straightforward.

Everything is ready to go. My first thought is “Wow, this is need and tidy!” The front of the piano has four buttons: Power, Tone (sound), Sustain, and Volume. I figure this has much to do the iPad, and that I’ll be controlling the piano using it. I start the App … and it’s neat an tidy too! There are four options immediately available on the screen: “Music Lab,’ “Video Lessons”, “LED Guided Practices”, and “Games.”

With the whole setup in front of me, I begin by checking out the piano by itself. It works “stand-alone,” without the iPad. Good to know! Next, I’m curious what the “Tone” button will do. I expect it to change the subtlety of the sound, but I’m surprised to learn that it scrolls through a large variety of sounds. There’s a basic piano sound, various keyboard sounds, strings, vibraphone, harpsichord, and even a percussion setting. This is fantastic and certainly a must-have feature of any keyboard on today’s market. Navigating the sounds isn’t the easiest, however. There are twenty different sounds. It’s difficult to know exactly which one you’re using, and which one is next.

About the sounds: The variety of sounds is great. The sonic quality of these sounds, although more than adequate, leave a little something to be desired. Major competitors have been working on their sounds for decades, refining their algorithms and sampling techniques that are a part of their sounds. It shows in their products. The ONE Music Group is a newcomer, and the sounds reflect that. Howbeit, they are pleasing enough to the ear.

The touch on this keyboard is basic, meaning that the keys don’t have any weight to them. It’s expected in a keyboard of this price range, and one should not expect The ONE Light to feel anything like an acoustic piano.

These initial impressions lead me to one conclusion: The ONE Light is not so much about the piano itself, it’s more about the unique experience of learning music that The ONE system offers. The next step will be to see what the App offers!

The App — Lessons and play-along songs

The ONE keyboard relies on it’s teaching element as it’s major strength. Similar to the “follow” and “play-along” features of other digital pianos, The ONE distinguishes itself through the use of an external medium (your portable device) to provide these features. It certainly makes a lot of sense — it’s an idea who’s time has certainly arrived. Using your iPad or tablet, you can quickly get to work learning music. There are three programs offered:

1) Video Lessons: The ONE Music Group teams up with the Hoffman Academy to offer video lessons through the App. I try the first lesson, and it’s interesting. The system claims to teach me to play in five minutes, and it delivers. I learn to play “Hot Cross Buns” in very little time. I should note that I have many years of experience already, but I think that most people would succeed with “Hot Cross Buns” using the video lesson. LED’s light up at the necessary moments during the lesson, so you can follow along. The lesson is a little over eight minutes long, and explains in-depth what you need to do. The experience is definitely different for me. I can sense it’s merits.

The first 12 lessons are free, but the following lessons will need to be purchased.

2) LED-Guided Practices: Choosing this option presents you with a list of songs to play along with. They’re in a “virtual sheet-music” format, and connecting your iPad or tablet to the piano allows the App to follow you as you learn. While highlighting the current note, a red LED appears on the actual key you need to play with your finger. Indications of which finger (fingerings) to use appear on the screen as well. Choosing the playback option on your screen plays the song, so you can hear how it’s supposed to sound. If you need to hear it a bit slower so you can better understand the idea, you can slow down the playback too. For the studious practicer, you can select a musical passage to work on, and simply repeat it as needed while you master it.

There is a large selection of free material to get you started playing with your The ONE smart piano.

The idea of lights guiding your practice is not a new idea. I remember having a keyboard with this feature when I was a kid (maaaaany years ago). The system works, however I find the placement of the LED lights on the keyboard awkward. More often than not the LED is hidden by my hand. It’s a detail to get used to, but takes some adjustment.

3) Games: The “Games” section features play-along games based upon the song selection provided. There are four categories of games, two of which function at the time I’m writing this piece (the other two: “Coming Soon …”). It’s a very simple game, similar in spirit to the popular Guitar Hero game. It uses what is called the “Waterfall” technique to display the notes to be played.

BREAKING NEWS!: Halfway through writing this, The One Smart Piano App offered an update. Included in the update is a new feature called the “Music Lab.” It’s a step-by-step tutorial system for learning songs using the “Waterfall” approach. I tried it out, and BY FAR it was the most successful for me! It’s good to see that The ONE is evolving. You can read more about The ONE at their website – click here!

Speaking of evolving … The ONE can help get you started towards playing the piano and learning about music. One reservation I have is that it (at this stage of development) would not replace formal lessons with a real, in-person teacher. As an experienced musician and music teacher, I’m aware of the value of real interaction. The ONE doesn’t quite have this element – yet. I would bet it’s coming in the not-so-distant future!

The main features of The ONE Light are its LED keys and the iPad-connected system for learning. The ONE does offer more however. There is a microphone input, which (with your mic) will turn the system into a sing-a-long system for you too. You can also add an Mp3 player, and use a sustain pedal much like other digital pianos. And there is a headphone output, designed for the small (16mm) headphones. It also has a USB/Midi output, so you can connect to your computer’s Digital Audio Workstation.

With The ONE Light, you’ll find hours of interesting musical fun and learning. It’s a novel concept to integrate a tablet or phone into the music learning process. Although there are some shortcomings with the keyboard, it’s more than perfect for the beginner or casual pianist. A bonus for teacher who decide to use the system as well, as The ONE Light is … light and partable! The volume of learning materials (and variety of learning methods) will satisfy anybody’s style and have you making music without delay. A relatively small investment (assuming you already have an iPad or other device), The ONE is worth the experience. And it’s soon available at BestBuy.ca!

How do you feel about new technologies for music learning? Is it about time? Is it a radical departure from traditional study? Let me know!