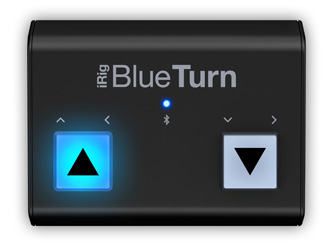 All musicians have been asked, at one time or another, about the inconvenience of having to turn pages while playing music. Traditional paper-based notation is typically printed so that at least one hand can be free to turn a page at a crucial moment.

Displaying music on screen-based devices has become more and more common over the past few years. Tablets, computers and even phones are replacing paper for music notation in live situations. Unfortunately, with the ability to customize size and layout of displayed music move those edited page-turn breaks to sometimes inconvenient locations.

IK Multimedia has developed the iRig® BlueTurn, the first backlit compact Bluetooth page turning solution for iPhone, iPad, Mac and Android. Portable and streamlined, it’s a small foot controller with two backlit soft-touch buttons that musicians, performers and more can easily pair with their favorite device for use with a wide range of document viewing apps and software. 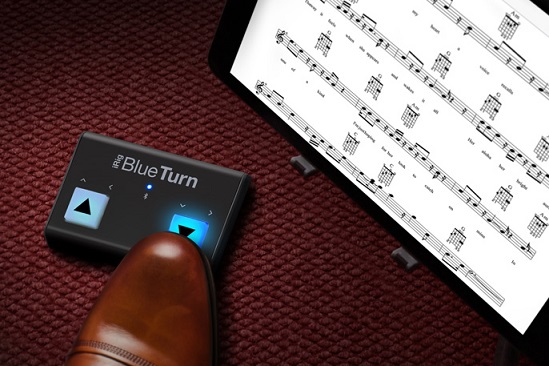 The iRig BlueTurn runs on two AAA batteries and features a rugged, durable enclosure. It’s an ideal companion for musicians who perform from a score, guitar and bass players who practice with tablature, speakers who use notes, presenters who use slides and more.

iRig BlueTurn’s buttons can be used in three different modes: They can send Page Up/Page Down, Arrow Up/Arrow Down or Arrow Left/Arrow Right commands depending on whether scrolling or page turning is required. These different modes can be set directly from the hardware when powering up.
The iRig BlueTurn backlit buttons have an unobtrusive glow that makes them well suited for use during digital slideshows, while performing music or giving a lecture.