The Fender DG-60 dreadnought acoustic guitar will soon be available at Best Buy. I’ll come out and say it—this is a great guitar for the price. If asked to recommend something for a beginner or as a small-gig instrument, I’d put the DG-60 on the list for sure.  It has a nice look and feel coupled with great playability and a brighter tone that fills the room.

Full disclosure right off the bat. I’m a self-taught guitarist and frankly, I’m reluctant to play guitar outside of a studio context. Furthermore, my main instrument that I’ve played since 5 (a really long time ago) is piano / keyboards.

Regardless of my own personal insecurities, I’ve played numerous guitars and recorded / mixed countless others in the hands of more competent players and the Fender DG-60 is a surprising package.

I unboxed the review model (Sunburst finish as shown to the left) that Best Buy sent me in front of the family to many ooo’s and ahh’s.

I do have to admit that the finish on the instrument is fantastic. For me, with any guitar, half of the desire to play the instrument is how the aesthetics appeal to you as well as the tactile feel of the instrument in your hands and against your body. Needless to say, I felt that I needed to take it for a spin right there in the living room—a mini improvisational concert for the kids. But more on playability and sound later.

The Fender DG-60 is a dreadnought guitar. It has a non-cutaway design with spruce top and laminated mahogany back and sides. The DG-60 is available in natural, black and sunburst finishes with polyurethane gloss finish. The Nato neck has a dovetail joint positioned at the 14th fret and a sonokelin fingerboard with 20 frets and dot position inlays. The scale is 25-1/3″ long and the nut is 1.69″ wide. DG-60 has black pickguard, chrome plated die-cast tuners, scalloped x bracing, dual action truss rod and urea string nut. The bridge of this model is matched with the fingerboard and made of sonokelin with compensated saddle.

As I mentioned above, for an inexpensive guitar, the DG-60 was a pleasant surprise. Fender has an interstellar reputation in the world of electric guitars but, their acoustic guitars have not been afforded the same kudos in the past. I not qualified to nor can I weigh in on either side of that debate, but from my limited time with this instrument, my impression of Fender as an acoustic guitar maker has been bolstered up a couple of notches

The tuning on the DG-60 is stable and the factory-installed strings (0.011 to 0.052 phosphor bronze) were nice to play. The longer scale-length (25-⅓”) means a tighter string-tension which gives the guitar what I’d term as a “brighter” tone. For a beginner, it will probably also translate into sore fingertips for a while.

Strumming, barring chords, playing scales, touching off harmonics … all produced nice, pleasant results. The factory-setup action is comfortably low and the body and neck are what I’d term as a comfortable medium size. I really had to try hard to find any flaw in the construction and factory setup—there were no noticeable fret-buzz issues and the intonation was quite good. At least for this guitar, it was good to go for a small gig.

I went back and forth between the DG-60 and the Takamine that lives in my studio. The lack of a neck-cut out on the DG-60 hindered playing at higher frets, but really, a classic dreadnought design is not really meant for fretboard gymnastics or high-fret capo positions. Compared to the Takamine (and other acoustics I’ve played or recorded), the DG-60 has a slightly brighter sound. It’s nothing that is harsh or cutting, but more akin to engaging the “presence” mode or boosting the high-position a touch on an electric guitar amp.

Luckily, I don’t have to embarrass myself with my guitar-playing as my friend Marc-André (and much more accomplished guitarist) posted a clip of himself playing a DG-60 on Youtube:

All in all, this was a pleasant instrument to play. I’m sorry that I have to send it back before being able to try it out on a couple of upcoming projects I have in the works. It plays beautifully right out of the box and it’s surprising how inexpensive it is. I think Fender has hit a lot of the right notes (pardon the metaphor) with the DG-60. It looks good, it feels good and it sounds good.

Is it a hidden gem that’s going to appreciate in value as it ages? I stop short of saying that, but I will say that it’s a solid instrument that I think would compliment any collection … or be someone’s first guitar and serve them as a primary instrument for a long time.

As I said, it will soon be at Best Buy where they have an ever expanding instrument selection. 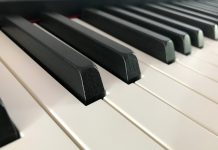 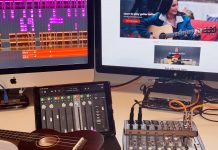 Music exploration, discovery, and creation enable your family to unleash your inner creative