For a while now my gaming colleagues have been telling me the Blue Yeti Microphone is their go-to microphone. They use it for all kinds of audio recording: podcasting, audio for YouTube, interviews, recording vocals, and streaming. Recently I was offered a chance to try out the Yeti to see for myself what the hype is all about.

One of the things that struck me right away about the Yeti is how simple it is to get started, especially for someone who is relatively new at professional audio recording like myself. The Yeti is a USB microphone with plug-and-play functionality, and literally within five minutes I had recorded my first audio sample. If you’ve ever thought that good quality audio recording takes a lot of time, effort, and money, think again—the Yeti gives you studio-quality recordings for a fraction of the price of professional mics. I’ve tested a bunch of mics over the years but nothing comes close to the striking design of the Blue Yeti microphone. For starters, it’s a mammoth device measuring one foot tall and weighing 3.4 lbs. This breaks down to 1.2 lbs for the mic itself, and 2.2 lbs for its ultra-sturdy metallic stand. If you like your mic to have presence, the Yeti screams quality and makes for nice eye candy.

I also love how the Yeti continues Blue Microphone’s bold tradition of mixing retro and contemporary design styles. The Yeti looks like it came straight from the golden era of radio, while at the same time adding a sleek and modern finish. The pill-shaped design and symmetrical presentation will make the Yeti stand out no matter where you use it. Not only is the Yeti mic nice to look at, its controls are laid out well too. On the front you have the mute button and headphone volume controls. These let you effortlessly monitor your recordings in real-time with zero-latency, and pause whenever you want to take a break.

On the bottom, there’s a 3.5mm headphone jack, a microUSB-USB port for connecting to your PC or Mac, and a screw-mount for when you want to connect the mic to a stand.

Turning our attention to the back, the mic features a gain adjuster knob, and a four-pattern dial to switch between audio modes.

Having the various controls and ports presented like this really streamlines the set-up. First, you connect your headphones and PC/Mac using the ports at the bottom. Next, you select your audio mode and adjust the gain with the back controls. Finally, as you’re recording you’ll use the mute and headphone volume on the front. It’s a simple 1-2-3 process that you can get a handle on in minutes. Most USB microphones out there give you one or two audio pattern modes to choose from, but the Yeti goes all-out with four. This gives you a ton of flexibility and allows you to make audio recordings in a range of scenarios.

For starters, you have the Cardioid Mode, which records audio coming directly into the front of the microphone. This is ideal for podcasting, streaming your games, or doing voice-overs.

Next, there’s the Omnidirectional Mode for picking up sounds all around the mic. This is great when you want to capture sound from every direction, say recording a conference call or live music.

Thirdly, we have Stereo Mode that records audio using both the left and right channels. This is ideal for capturing high-quality sounds for musical instruments or vocals.

Lastly, there’s a Bidirectional Mode, which records audio coming into the front and rear of the mic. It’s perfect for two-person interviews, or podcasting.

Having such incredible versatility really adds to Yeti’s value proposition, and helps it stand out in a crowded market. No matter what type of recording you need to do next, the Yeti has a pattern mode that’s just right for optimal sound. As mentioned, getting set-up with the Yeti mic is a snap. That’s because of its easy to use plug-and-play functionality. As a gamer, I’m a Windows guy and connecting Yeti to my tablet and desktop PC was as simple as plugging it into an available USB port. My wife is a graphic designer and always uses a Mac, and when we tried on her Apple machine the connection went just as smoothly.

There are a few minimum requirements for the Yeti to work, such as Windows Vista, 7, 8 (or newer) for PC, and OSX (10.4.11 or higher) for Mac. These are pretty generous requirements, so unless your computer is more than 10 years old with no OS upgrades, the Yeti should easily connect to your machine. In all scenarios I tested, the Yeti’s audio sounded excellent. I used the Yeti for my entire video review (embedded at the top of this article) and you can hear how crisp and clear the audio capture is. For YouTube audio, the Yeti is second to none.

I also tried recording bidirectional and omnidirectional audio, and in both cases the sound was crystal clear. The Yeti’s unique tri-capsule is amazing at focusing on the sounds you want, while minimizing the room’s ambient noise. Its adjustable stand also allows you to angle the mic to the exact position you want for optimal clarity. As well, any buzzing or humming background noises can easily be eliminated by adjusting the gain. I also liked that I was able to listen to my recordings in real-time using headphones, as this enabled me to make minor tweaks to get the best audio possible.

My wife loves singing, so we captured a few songs using the Stereo mode and again the audio quality was superb. She too loved how easy it was to get instant feedback on her voice using headphones. All in all, the Yeti captured great quality audio no matter how we used it. Lately I’ve been getting into podcasting with my gaming friends, and now I know which microphone we should use going forward— The Blue Microphone Yeti. It’s a sleek mic with great features, an intuitive set-up, and captures crystal clear audio. 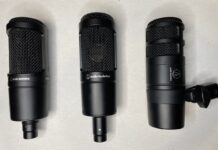 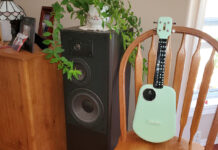