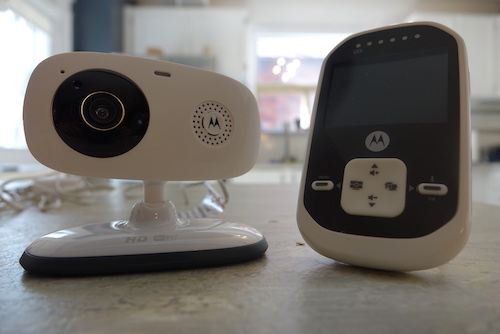 After researching baby monitors extensively before my son was born, I opted for one that operates on the 2.4GHz frequency. While remote (and even local) access from a smartphone sounded tempting, I was fine with a close and reliable connection that would simply let me keep an eye on him while he was deep in slumber in his room and I was elsewhere in the home.

I owned a Motorola baby monitor, which I continue to use to this day to check in on my son, now 4, while he’s sleeping or in his playroom. Needless to say, I was excited to try out the Motorola MBP662CONNECT baby monitor, which combines the best of both worlds: it operates on the trusted 2.4GHz network, and allows for Wi-Fi connectivity.

The system consists of a camera and monitor, plus, you can download the Hubble app for viewing the feed both in the home, or remotely.

Setup was simple: insert the battery into the monitor, plug both the monitor and camera in, and let the former charge for at least 16 hours. While waiting, I downloaded the Hubble app and set up an account. 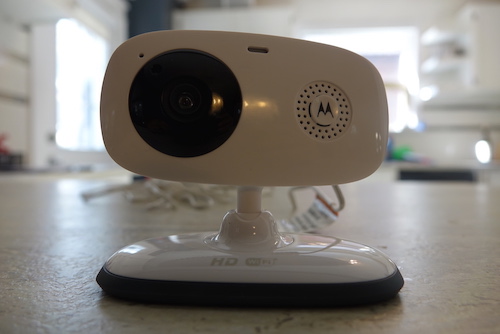 Once ready, follow the on-screen instructions to pair the camera with the app via Bluetooth, then set it up on the Wi-Fi network. It took a few tries since a firmware update resulted in a lost connection, requiring me to re-do the process. But once set up, it was smooth sailing.

It’s worth noting that while you can receive still image captures of motion detection if desired, the cloud video recording service requires a fee, though you do get a two-week trial. I opted out of this.

I positioned the camera in my four-year-old son’s room, atop his dresser so I could get a clear view of him in bed at night.

The sleek and small camera employs an oval design, sitting on a base that allows it to be positioned tabletop, or wall or ceiling mount it. 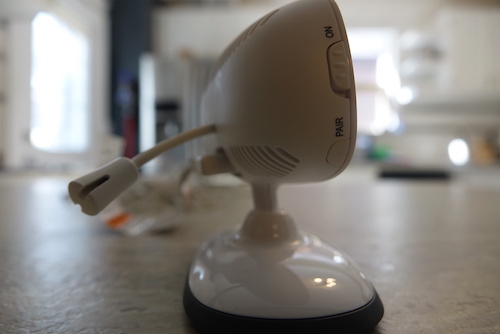 There are only two buttons: a slider for power on/off and pairing button for initial setup with your mobile device, which can be used for remote viewing through the Hubble app.

The camera can be adjusted to pan and tilt up/down and left/right to be positioned as you wish, pointed directly into the centre of your baby’s crib, or to afford a clear view of an entire playroom or bedroom. I placed it atop my son’s bedroom dresser, facing his bed.

While manual adjustments are nice, there’s no way to remotely pan and tilt the camera from the monitor or mobile device. It would have been useful if the D-pad could function as a remote for the camera as well. When my son was a baby, he rarely slept in one place, so being able to keep the camera a bit closer for a better view, and panning left and right to locate his face, was of value. That said, the picture quality with this camera is decent enough that I was able to position it further away and still keep a close eye, no matter where my son moved around in his room.

With the built-in speaker, you can also talk to baby or toddler through the camera unit using the monitor or app. 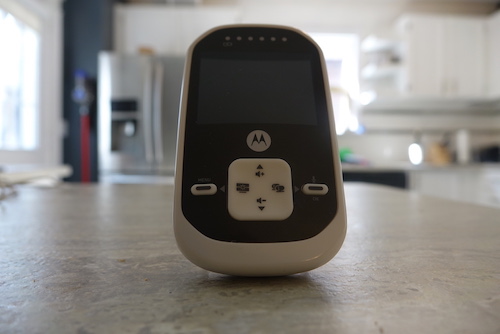 Equally as sleek and small, the miniature monitor is easily held in one hand—it almost resembles a two-way radio. It’s also light, so easy enough to pop into your pocket as you roam around the home. Or, leave it situated in one spot, propped up by the built-in, pop-out kickstand. It connects to the camera over the 2.4GHz network from up to 590 feet away (200-metres transmission range), and displays HD-quality video, as well as infrared night vision.

It has a centre D-pad with buttons for adjusting volume up and down, to access the menu or put the screen into sleep mode, and an “enter” key for menu options. Press the right button as well to talk to your child remotely.

On the small screen itself, you can see a clear camera view, with the signal strength and room temperature on the top, left, and camera number (it can be used to monitor up to four), and battery life on the right. 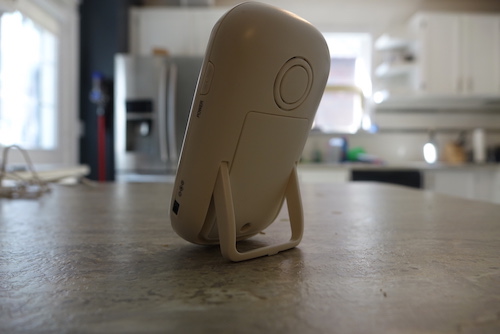 Menu options include digital zoom (1x or 2x), setting a wake-up alert for every 2-, 4-, or 6-hours (to coincide with a nursing schedule, for example), five melodies that can be played to soothe baby back to sleep, and video timer for shutting the monitor screen off every 5-, 30-, or 60-minutes while leaving audio on. This will help conserve battery, but allow you to automatically check in at pre-set intervals.

If you have multiple cameras, you can select the camera scan option, which will display images from each camera in a loop, adjusting every 10 seconds. This is great if you want to watch multiple kids in different rooms.

The battery is rated at just four hours, which suggests it’s meant to remain plugged in, only unplugged when you need to move to another room and want to bring it with you for a short time. I did find, however, that it lasted a bit longer than that—you could comfortably keep it downstairs with you through a full day, only bringing it up to your bedroom to plug in and charge at night. A low-level battery alert beeps to let you know when it’s time to recharge. 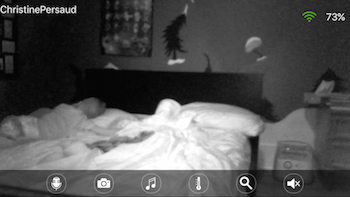 The Hubble app provides a view of the camera from wherever you are in a small window of the top half of the device screen, or turn your device horizontally to see a larger, 16:9 view. But even the vertical view will be sufficient for those with a relatively large-screened smartphone (I used an iPhone 5S). Picture quality was clear, allowing me to keep a watchful eye on my son.

You’ll also receive motion detection notifications, along with a copy of a snapshot so you can see if your toddler has managed to crawl out of his crib, or it was just the family cat roaming about the room. The motion detection is extremely sensitive, even when set to “low,” picking up beams of sunlight coming through the window. That could get annoying, especially if you have pets, and set up the app to send a notification every time there’s motion. However, you can activate a do not disturb mode, so that you don’t get constant motion detection updates on your phone while in a meeting at work, for example.

What’s more, the snapshots can actually provide some useful details. For example, one morning, I was able to see that my son was up and walked right by the camera a full hour earlier than he came out of bed. What was he up to? The cloud video recording capability would help determine that.

Through the app, you can talk to your child, play melodies, manually snap a photo, check the temperature, and mute the sound. I wished the temperature displayed in a corner of the screen like it does on the monitor, versus having to manually tap into the setting to see. However, you can set a temperature range and receive alerts only when the room is logged as being too cold or hot for your liking.

Other setting options include changing the camera’s name (e.g. from Billy’s Room to Playroom if you move the camera to another location), deleting events, adjusting the time zone, night vision intensity, and brightness, and seeing the strength of the Wi-Fi signal as a percentage.

It’s worth noting that, in addition to viewing the camera feed from the mobile app, you can also access it online via computer. So mom or dad can peek in at baby during naptime while he’s at work, or away on a business trip. Visit the URL, sign in to your account, and watch.

It oddly took a few tries before the camera view appeared on my MacBook Air through the Web link. This, however, could have been an issue with my network connectivity, and not the camera or system itself.

Having used a Motorola monitor that operates on the 2.4GHz frequency for many years, I had high hopes for this package. And it delivered.

It offers a sleeker design compared to my old camera, with long battery life for the monitor, and great picture quality. However, the inability to remotely pan or tilt the camera was a downside. But, as noted, those who wish to ceiling or wall-mount it may find it easy enough to get a full view of the room, and not have a need for that capability anyway.

Best of all, it combines the best of both monitoring worlds—reliable 2.4GHz communication and remote mobile access. That deserves a double thumbs up.