The Angelcare Baby Breathing and Video Baby Monitor lets concerned parents rest a little easier knowing that their little angel is sleeping soundly. By constantly monitoring the tiny movements of your baby’s body as it breathes, the Angelcare monitor adds an extra level of assurance for parents as they gaze at their little one resting serenely still in the crib.

Benefits of Tracking Your Baby’s Breathing

There are dozens, if not hundreds of different baby monitors on the market that let parents keep watchful eyes, ears, and goodness knows what other senses on their sleeping children. Though there are few that solve the “bleary eye’d, blurry screen” issue that plagues most thoughtful parents in the middle of the night.

Extra reassurance in the dark of night

Have you ever looked at a video baby monitor screen at 3am and tried to discern if what you see is a sleeping baby whose chest is rising and falling with the gentle rhythm of a peaceful angel? It’s tough. I mean really tough. Especially since you’re half asleep, bleary-eyed, and manifesting as hard as you can that everything’s ok and you can just close your eyes again. The chances are good that your baby monitor isn’t streaming in 1080p either, especially if it’s in night vision mode. All this boils down to one simple fact. You’re lying there wondering if the miraculous 3 or 4 hour stretch of sleep you’ve just enjoyed has been at the peril of your child.

Before diving further into the review, I’d like to first explore one of the main reasons most parents might think about a breathing tracking for their baby. Most, if not all parents, have heard the horror stories of sudden infant death syndrome (SIDS) from friends, family, Google, or healthcare professionals. Little is known about what causes this tragic, seemingly unprovoked, sudden terrible event. What is known, is that some babies go to sleep like any other night, and then at some point they simply stop breathing.

There are a few correlated risks that have been associated with but not proven to cause SIDS. Children who live in a household with someone who smokes have a higher chance of SIDS. So too do children who aren’t breastfed, sleep on their side or front, and who are put to bed with loose blankets, toys, or other items that could potentially smother a child. Children who co-sleep in bed with parents also have a higher rate of SIDS mortality.

It’s worth noting that in 2014, coroners across Canada started to drop the term SIDS from autopsy reports because it was essentially becoming a diagnosis for an undiagnosed cause of death. Instead, they’ve chosen to use terms like “undetermined” and “sudden unexpected death”. The good news is that the rate of SIDS deaths in Canada has been dropping steadily since 2000, and dropped over 300% from 2000 to 2013 when the rate hit 11.3 deaths per 100,000 live births.

Despite these low numbers, the risk still appears to exist, and even for cautious parents who are already taking all the precautions, some assurance that their little one is still breathing softly is the only thing that will help them get some quality rest. It’s important to note that Angelcare calls out that this breathing monitor should not be used as a medical device or to prevent SIDS, but it is certainly a great tool to help parents stay aware and diligent.

When setting up the monitor, there are three components to be mindful of. The first is the parent unit which consists of the 4.3 inch touch screen, battery, built-in stand, and charger. The second is the nursery unit which houses the camera, microphone, speaker, and thermometer. The third is the movement monitor which is a simple battery operated pressure plate that is fitted under the crib mattress.

The idea behind the monitor is that it’s constantly monitoring movement through the pressure plate, and if no movement is detected for 20 seconds straight, then an alarm will sound on both the parent unit and the nursery unit. At first this was honestly a little hard to wrap my head around. I mean, other than loving, feeding and changing diapers, literally the only other thing you’re trying to do for an infant is to get them to sleep, so the idea of an alarm sounding off in their room is a tough sell at first. The reality though is that the sensor is actually pretty good at detecting even the slightest movement, so there is little chance of a false positive (negative?) result that triggers the alarm. It’s worth noting that the movement sensor can’t be used with memory foam mattresses or cribs that have hollow frames, so keep that in mind before you make your decision.

Features of the Angelcare Monitor

A common feature with many video monitors these days is the Wi-Fi connection. The issue with this is that they rely on the quality and strength of your existing network to function properly. One benefit of the Angelcare monitor is that it doesn’t use your home’s Wi-Fi network, it creates its own. The big benefits to this feature are that the parent unit, nursery unit, and movement monitor are all setup and connected to each other right out of the box. I was actually really surprised by this since I’ve used a number of different monitors before and all required a decent amount of time and fiddling to get setup.

Another benefit of the built-in connection is that you don’t even need Wi-Fi to use this video monitor. If you travel a lot with your child, spend the night at friends’ or family’s, or simply don’t have a decent Wi-Fi network at home, there’s no problem. The 3 components of the Angelcare monitor system will still be able to stay connected and let you rest easy.

If you’re a parent of multiples, one feature you might be pleased about is the fact that you can connect up to two separate nursery units and movement monitors to a single parent unit. This is a big benefit since it’s unlikely that you can get two cribs in a single frame of one nursery unit. Even if you don’t have multiple children, you can still add a second monitor and place it in the living room, playroom, or other location to make sure you’ve got a view to wherever your baby might be.

The Parent Unit on the Angelcare Monitor

The parent unit contains the touch screen video monitor (480x272px), microphone, and speaker so you can keep a watchful eye and even soothe your baby without causing any disruption by entering the room. The range on the parent unit extends up to 250m with no obstructions, so though it’ll be less than that in your home, there’s plenty of range to ensure that you can move around and even venture into the back or front yard without losing a connection.

The touchscreen is a really nice feature given that many other monitors use buttons which I’ve definitely pressed inadvertently in the dark of night. The touchscreen isn’t as responsive as a modern smartphone and does require some pressure to record the input, but it functions well when you get used to it.

The Microphone and Speaker

Personally I have a few hesitations when it comes to the two-way communication feature of this or any monitor. There’s something a little bit odd about trying to soothe your baby via a disassociated voice coming out of the video camera above their crib. I will say though that the audio quality is pretty decent, so your baby will definitely be able to tell that it’s mum or dad’s voice coming through. There’s another benefit to the two-way communication as well: calling for backup! When you’re changing a diaper and realize it’s a full “up-the-backer” blowout, you might want to call for support or extra baby wipes and diapers. Your partner is going to be able to hear your feeble cries for help through the parent unit, and will come running with reinforcements.

The Nursery Unit on the Angelcare Monitor

The nursery unit contains the camera, night vision camera, temperature sensor and display, and a speaker and microphone. On the “plus” model I’m reviewing, the camera can be used on a tabletop with the included stand that it attaches with a round magnet, or the magnet can be removed from the stand and mounted to the wall to provide a fixed pivot point. Using the tabletop stand will usually mean the monitor is a fair distance away from the crib and you’ll be struggling to try and look through the bars of the crib. Placing the monitor on a flat surface near the crib is next to impossible since the camera can’t pivot far enough down to give you a good view. Even mounting on the wall may pose some issues because of this, so it’s best to consider carefully where you place your mount and how high it is above the crib.

One necessary evil with this design though is that when you want to pick your child up out of the crib to feed, soothe, or otherwise spend some time with them you need to manually pause the movement monitor by pressing a button on either the nursery or parent unit. God forbid you forget to do this in the middle of a dream feed or while your partner sleeps in while you do the morning feed. If you do forget, then 20 fateful seconds later everyone is going to get a nice abrasive reminder as the alarm sounds through both ends of the system. This happened to me just last night, and my wife was pretty unimpressed that after all her hard work of getting him back to sleep he was jostled awake by the alarm while she was holding him.

Final Verdict on the Angelcare Monitor

Ultimately, this is a pretty great video monitor and it has the useful benefit of being able to monitor your child’s breathing so you can rest easy at night. If you’re the kind of parent who wants to take every precaution and (perhaps even more importantly) will remember to pause the alarm when you take your baby out of the crib, then this monitor is definitely for you. It’s worth noting that the quality of the video on this monitor isn’t as high as others on the market, so in lower light the video is quite grainy and will get worse as you use the digital zoom feature. The night vision also isn’t the best I’ve seen, but it definitely will work to help you see what baby is up to and make sure they aren’t getting up to any funny business.

Be sure to check out the video and visit bestbuy.ca to see the full details and specs on the Angelcare Baby Breathing & Video Baby Monitor. 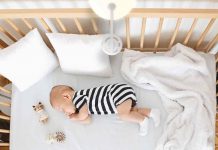 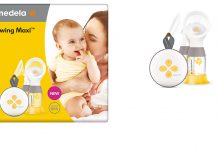 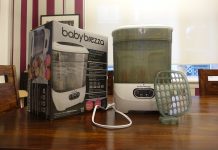