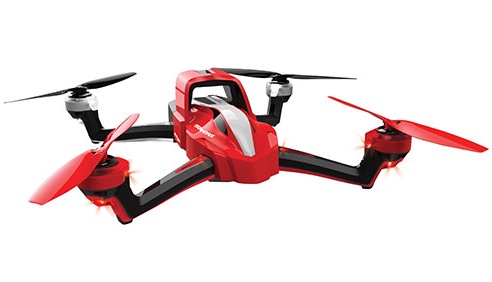 Today we attempt to answer that oldest of questions—the one which, down through the ages, all of the great Philosophers have struggled, unsuccessfully, to answer. Today we join the great debate, the age-old discussion, in an attempt to answer the biggest question of all: Which drone is right for you, the hobbyist?

If the term “drone hobbyist” describes you, stick around and we’ll see if we can help you to find the ideal drone for your particular level of interest.

What do most drone hobbyists look for in a drone? 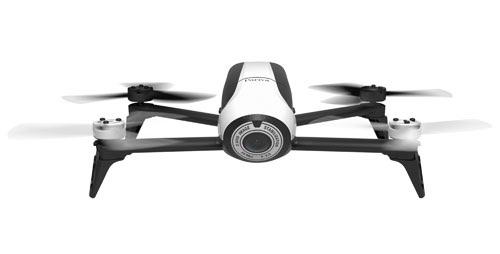 The short answer to this question is simply fun! The typical drone hobbyist is interested in the aspects of drone flying that provide the most overall fun and enjoyment when taking to the skies. Characteristics like speed, aerial acrobatics, and extended battery life (i.e., longer flight times) are particularly important to drone hobbyists. After all, these are the attributes that bring the most enjoyment to those that participate in the hobby. Many top hobby drones also feature multiple flight modes. This feature makes flying your drone significantly easier, thus adding considerably to the overall fun factor!

Additional considerations of the typical drone hobbyist are things like HD video cameras & Gimbals, built-in Wi-Fi capabilities, and GPS functions. While these features may not be important to every hobbyist, they certainly do add to the piloting experience. Amateur videographers, for instance, can make amazing short movies to share among family & friends locally and with the populace at large via online sites like YouTube & Facebook. 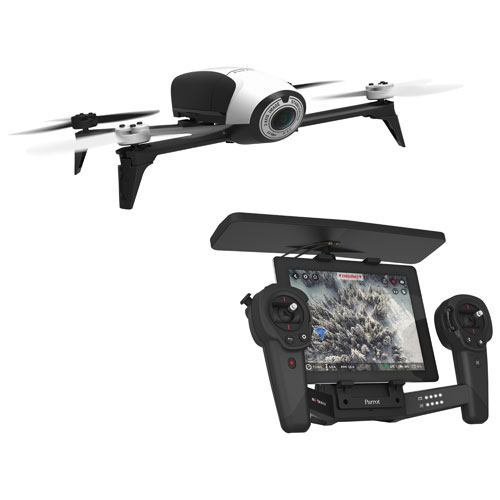 The first hobby drone we’ll take a look at is the Parrot Bebop 2 Quadcopter Drone with Skycontroller. The Parrot Bebop 2 is the first drone in its weight class with the ability to fly for longer than 20 consecutive minutes on a single battery charge. This is an amazing feature for all hobby fliers because hobbyists want as much time in the air as possible! The included Skycontroller Remote offers enhanced flight (and camera) control and can be used either with or without your favourite smart device.

Top speeds for the Bebop 2 are in the 60 Km/h range, and there’s even a built-in accelerometer so you can track your speed. The accelerometer is actually part of the FreeFlight 3 Piloting App—an easy-to-use app (for both Android and iOS devices) that provides useful flight information and a number of fun piloting functions like the one-touch flip stunt! The Bebop 2 even includes its own 14MP fisheye camera with 8GB of on-board memory for image & video storage. This high quality camera snaps still photos and shoots amazing video footage in Full HD 1080p (shooting at 30fps) and features a splash-proof (and dust-proof) lens. It captures an impressive 180-degree field of view as it flies the skies, and its digital image stabilization feature offers absolute clarity & stability for every video you record. 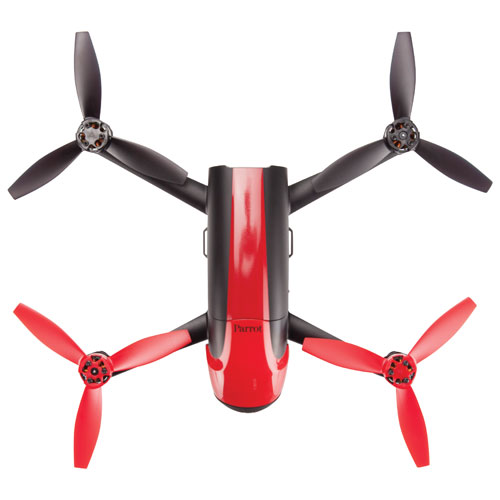 If you’d like to get your own Bebop 2 but don’t wish to acquire the Skycontroller, you can always save yourself a few bucks by picking up the Parrot Bebop 2 Quadcopter Drone with Camera, which omits the Skycontroller but still offers great features and play value. Among these features are easy-to-use flight modes like Pilot Mode (featuring a virtual joystick that provides responsive flight controls) and Emergency Mode (a panic prevention mode whereby you can land immediately if you find yourself in trouble). You can learn even more about this version of the Bebop 2 by clicking on the link and visiting its Best Buy product page. 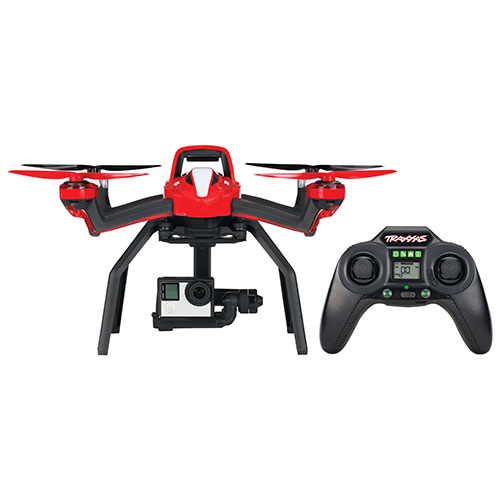 If you feel the need—the need for speed, then perhaps you’d be interested in the Traxxas Aton Plus Quadcopter Drone with 2-Axis Gimbal. This awesome quad can reach speeds of up to 80 Km/h, which is almost unheard of in the world of aerial drones. Moreover, thanks to its powerful brushless motors, the Traxxas Aton can perform the most amazing stunts & aerial acrobatic tricks you’ve ever seen. The Aton also features a 2.4GHz Radio Control System, a GPS tracking system, a 3000mAh 3-Cell LiPo iD Battery (for up to 28 minutes of uninterrupted flying time), and multiple flight modes (like Sport Mode, Film Mode, and Expert Mode) for the most easy and intuitive flying. For those drone hobbyists with an interest in aerial photography and movie making, the Traxxas Aton features a 2-Axis Gimble that’s designed specifically for action cameras. Of course, you will have to purchase your camera separately, but this is actually a good thing as it gives you complete control over your movie making. Also included with the Aton is the Traxxas Flight Link App, which is compatible with both iOS & Android based smart devices (be sure to check that your generation of device meets the minimum requirements) and allows you to perform cool piloting functions like checking your drone’s flight status. 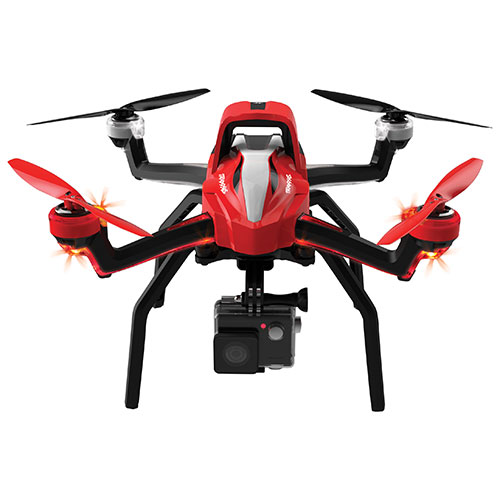 Much like the Parrot Bebop 2, the Traxxas Aton has both a full-featured version & a separate base model that allows consumers to save a few bucks by omitting some of the bells and whistles that they may not need. The Traxxas Aton Quadcopter Drone with Camera Mount, for instance, does not include the 2-Axis Gimbal that the Plus version has, but it still provides a fixed camera mount that dampens vibrations during flight and works with compatible action cameras such as those in the amazing Go Pro family of cameras. These cameras are, of course, sold separately from the Aton, but it’s still cool to know that you don’t have to purchase the most expensive drone model out there to capture high quality video footage!

If you’d like a bit more information on the Traxxas Aton Quadcopter Drone, click HERE for a detailed overview from the Best Buy Canada website. The article you’ll find there fully summarizes the Aton’s major features & specs, and it does so in straightforward, everyday language. One way or another, if you’re a bona fide drone hobbyist, you’ll be sure to like what the Traxxas Aton has to offer!

And on that note we arrive at the end of today’s hobby drone discussion. If you’re thinking of jumping into the drone hobby and wish to start with a full-featured model that’s sure to please—providing untold hours of high-flying fun, then you really can’t go wrong with any of the models discussed above. Each of these drones provides everything you’ll need to go all-out as a serious drone hobbyist. What are you waiting for?