As a luxurious summer for most of us draws to a close you may find that despite being fairly active you’re not feeling as energetic or healthy as you think you should. If you’ve fallen off the fitness bandwagon it’s not that hard to get back on—if you have the right tools to help you. Enter wearable technology (and a few other little extras) that can help you kick things into high gear and get you to the next level.

There are three important elements to fitness: watching what you eat, getting enough exercise and getting enough sleep. While there are plenty of bloggers out there who are trying to make the case that nutrition comes down to more than just calories in and calories out, for the vast majority of us simple physics will do just fine. So let’s preface this whole thing by saying that if you’re not eating right you’re already setting yourself up for failure. As such: use your smartphone to track what you eat from day to day. Personally I use MyFitnessPal to keep a keen eye on what I’m doing. By entering every bit of food that you eat and drink, you’ll get an accurate picture not only of your calorie intake, but how you’re doing on your macro nutrients as well—fat, carbs, and protein.

The next step is monitoring your calorie output and other vital statistics. I have three devices that I think you’ll like here.

The Fitbit is the gold standard for simple, efficient wearable technology. It’s a small sensor on a silicone wristband, and those bands are available in a multitude of colours. You can even get gold ones from jewellers out there. Below is the FitBit Flex: All FitBits have a base level of functionality in common: they all act as activity monitors with sensors built-in. This means that the unit will track, through the smartphone app or through their connected website, all of the steps and motions that you take and make throughout the day. You can get regular updates on the built-in display; the Flex is pretty basic, using five dots to show you how close you are to your goal, while the more advanced units that have come out (or some of the equivalent units with larger screens, like the FitBit One) will show you an actual number.

I like the Flex because it’s light, the battery is long-lasting (needing a charge roughly once per week) and the app is well-developed. You can get your at-a-glance update on your day, or you can dig into the app to find out exactly how you’re doing. The FitBit Charge HR is a next-genration FitBit with an integrated watch function, and additional features like a heart-rate monitor and stair counting. It’s the obvious upgrade for any current FitBit user, and a great place to get in if you’re new to the FitBit Universe.

For me, FitBit is more than just the monitoring from wearable tech, though. While I’ve moved on from using my Flex day to day (more about that later), I still step on my FitBit Aria scale. Being able to track my weight and body fat percentage really helps, as it cements when I’m doing things right, and gives me a chance to admit that yes, that bottle of wine and pack of girlguide cookies was a poor nutritional choice. I really like the Jawbone UP line; I think they’re fashionable and that they don’t radiate a “fitness band” look when you wear them. That alone was enough to get me in the door, but the app and extended functionality is what kept me there.

Jawbone’s personal coaching options are the real deal-maker here, where the band analyzes what you’re doing and makes helpful suggestions. FitBit has that, but it’s a $49 per year service with a real person on the other end of the line. It’s up to you as to whether that’s worth your dollar.

The sleep tracking that comes with the Jawbone line is a bit better than what I found in my FitBit Flex. Overall app design is more friendly, and Jawbone connects with Apple’s Health App, something the team at FitBit has refused to do. I bought a third party app to sync my FitBit data from my scale to Health, but it’s still a bit of a pain, and it’s nice to have it done automatically.

Both the FitBit and the Jawbone UP feature vibration alerts that can wake you silently. I won’t lie: I’ve used that to take a nap on the train on the way home, getting my alarm to rouse me before I miss my stop. I’ve made the move to an Apple Watch, but let’s address smart watches in general. Most new smartwatches have heart rate monitoring, which is a feature I’m really appreciating at the gym. Being able to get your heart rate into the active zone and keeping it there is easier when you don’t have to stop to take your pulse. I’ve also found that the “move motivators” that ask you to stand up regularly is helpful when you’re stuck sitting down at your job. The app features for both iOS and Android are pretty solid, but it’s dependent on the app. I used a Galaxy Gear when it launched, and I can say that the current software and hardware is a vast improvement over my initial experience. The Apple Watch, as a fitness device, has been incredibly solid; monitoring workouts doesn’t eat battery life, and having my music stored on my watch means I can throw on some Bluetooth earphones without having to carry my phone with me.

For Android-o-philes, the Samsung Gear 2 has been setting reviewers alight with praise for its integration as an Android Wear piece. It’s a stylish device that delivers a lot of the notificaiton functionality that users are looking for, as well as tracking fitness through Samsung’s exclusive S Health app.

The biggest thing about wearable tech is that the simple act of putting it on everyday becomes a ritual and a reminder that you need to make conscious choices about your health. Getting notifications throughout the day should act as a reminder that you need to be moving, you need to watch what you eat, and that yes, you are one step closer to your goals. If you don’t have a fitness band, take the first step by getting one. If you do have one, charge it up and put it on everyday. It’s the beginning of a good habit that can make your life so much better. 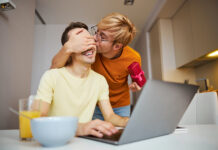