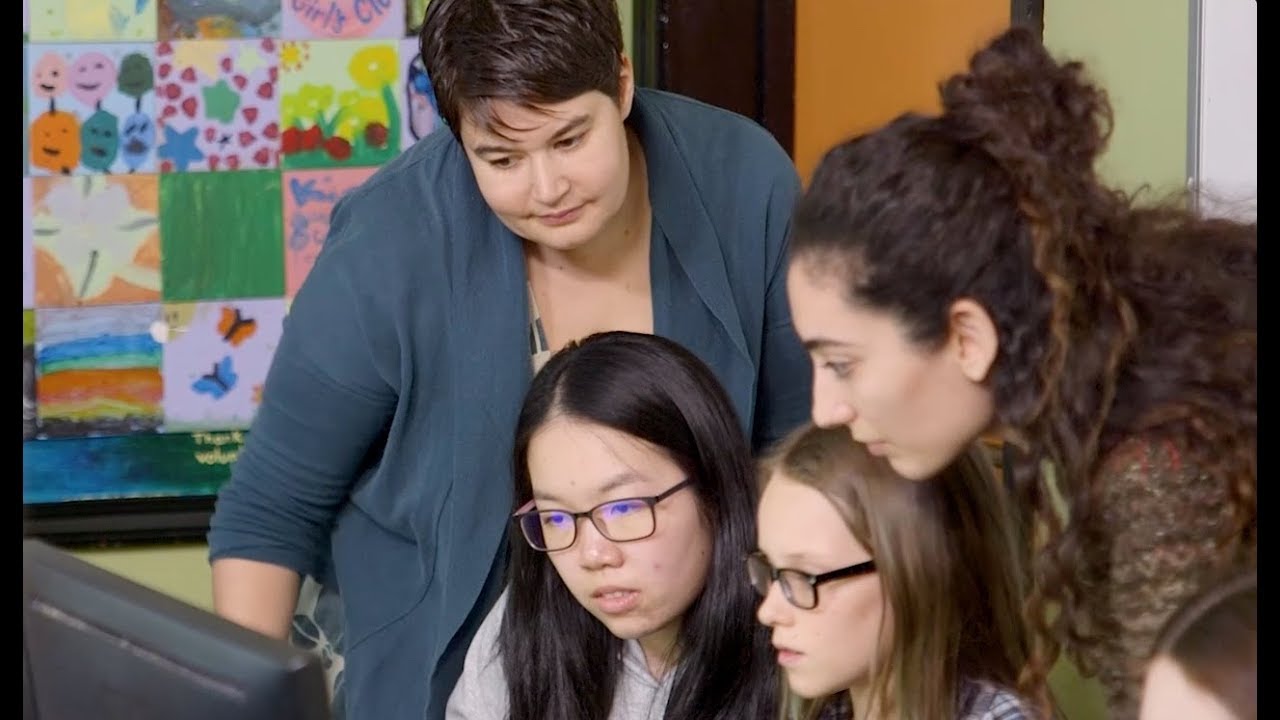 It can be hard to get something new in front of a group of teens these days. Smart phones, apps, and computers are second nature to this age demographic, and even though they’re practically experts at playing, reading, and learning on these devices, the idea of learning to code is something that’s only starting to show up on their radar. But the tech industry wants kids to realize just how exciting it can be to learn to code and exactly what that can mean for their future. That’s where STEM comes in: it stands for Science, Technology, Engineering, and Math, and getting the next generation to jump on board and check out what these areas have to offer has become a real priority. More than just getting kids involved in STEM, there’s a growing interest in getting girls interested in coding. Because women are so underrepresented in tech and they aren’t choosing STEM careers as often as men, girls coding programs and initiatives to get girls excited about STEM are showing up everywhere.

This past week my 16 year old daughter and I had the privilege of seeing a group of teen and pre-teen girls experience what it was like to learn to code for the first time. Not only was it fun to watch, it was really surprising to both the girls and everyone in the room at how easy it is to pick up coding. It was literally only two hours from the moment they walked into the room to when they presented their own games they learned to code on ASUS computers. The Girl’s Coding event was hosted by both Best Buy and ASUS, and it was held at the Kimount Boys and Girls club in Vancouver. Joel Thomas, the Coordinator for the Kimount club, says they’ve had a girls club there for the past seven years. They wanted to create a space for the girls to come and feel comfortable to play and learn, and after they added teenager mentors to their girls club, they’ve watched it take off in amazing ways.

“It’s amazing seeing teens aged 14-18 working with girls aged 8-12,” Thomas said. “They work together sharing experiences, talking about areas like body image, bullying, friendship, relationships and life in the eye of a female, all in a fun and safe environment. This is one of my favorite programs at the club and one that I am most proud of.”

Although this specific group of girls have been meeting together over the past year, they were really surprised to walk into a room fully decked out with computers for a coding class. Supplied by ASUS, the girls club was able to learn on the ASUS 14” ZenBook laptop with a Full HD 1080p display and the ASUS VP247H-P 23.6” LED-backlit gaming monitor with 1920 x 1080p resolution. There were also several ASUS Zefone 4 Max on display, and it was great to have those because the girls could easily see that the games they built were available to play on multiple platforms. Teaching the class was Jacob from Codecore. Codecore is a bootcamp that’s in the Gastown area of Vancouver, and it’s specifically for post-secondary students to learn the fundamentals of coding. In his spare time Jacob runs coding workshops and summer camps for kids.

The platform Jacob used to teach the girls to build a game is called Construct 2. It’s an amazing platform that anyone can sign up for online, and each girl will be given continued access to Construct 2 so they can continue to improve their game-building skills.

I asked Jacob what career advice he’d give to a young girl who’s just learning to code like the girl’s in the club were, and what paths they could pursue if they did learn. He believes that no matter what industry they choose, learning to code is important. “Almost every industry is touched by technology, be it medical, financial, education, etc.  Even if you do not become a software developer, being able to speak the language of coding or having that fundamental knowledge will open a lot of doors.”

Jacob recommends that pre-teen and teen girls start by learning JavaScript because it’s such a versatile programming language. It lets you create web apps, video games, and mobile apps. Codecore is starting to see a real surge in female enrollment, with an average age of 25 for women who sign up for the bootcamp. As Jacob went through each step in the process the girls drew their own characters, made their characters move, and imported backgrounds into their games. Everyone in the background stayed quiet so they could focus on the instruction, but the girls really had a great time chatting back and forth as they coded.

My daughter was sitting in and watching along with me, and although she’s already taken computer programming in high school, she was really interested in getting behind a computer herself and building her own game. It really helped to see girls her age so excited by what they were learning. At the end of the two hours the girls had complete games that were uploaded and are now available on the Construct 2 website Scirra Arcade. When the girls were asked what they liked about the experience, they all had different answers.

11-year-old Opal, a future actress, was excited by what she learned and was looking forward to sharing her game with friends. Before this workshop, 17-year-old Helen didn’t know much about STEM. A mentor to the younger girls, she was happy to have the opportunity to learn, and as a girl in Grade 12 who’s exploring possible careers, she was surprised at how easy it was to pick up and how much she enjoyed learning to code.

The best surprise of the day was saved for the end of the class: the girls found out as they finished up that ASUS donated the computers they used to the Kimount Boys & Girls Club. That means they can go back to Contruct 2 and create even more games, building their skills and learning more about coding as they go.

This event hosted by Best Buy and ASUS could very well be a pivotal moment when some of these girls choose a career in STEM. At the very least, they’re learning a valuable skill that’s going to open up doors for them as they grow up.

I’m excited for these girls, and it really left both my daughter and I with an even stronger interest in STEM. Thanks to this event my daughter is planning on heading to a UBC open house for applied sciences and engineering. Maybe she’ll have a career in a STEM field too?

You can try out all of the games the girls built right now on the Scirra Arcade. Which game is your favourite? Are you inspired to try to make your own game?  Tell us your thoughts in the comments below.