In just seven years, Microsoft has gone from the company that makes Windows and Office (and the Xbox) to releasing some of the most exciting Windows PC hardware with its game-changing Surface devices. This all started with the Surface Pro in 2012—kicking off the era of the prosumer tablet—and has expanded to included multiple tablets, the 2-in-1 Surface Book, the super slim Surface laptop, the Surface Studio desktop PC and a wide range of accessories including the Surface Pen. By combining premium design with an unbeatable Windows 10 user experience, Microsoft’s Surface line-up has pushed all computer manufacturers to seriously up their game. Today, Microsoft held a special event where the latest generation Surface devices were unveiled, including the 7th generation Surface Pro, the Surface Laptop 3 and all-new Surface Pro X.

Naturally, you’ll be able to pre-order the new Surface Family products from Best Buy. In the meantime, here’s everything you need to know about Microsoft’s Surface event.

Look for big changes with the third generation Surface laptop. Previously available as only a 13.5-inch model, Microsoft is now adding a 15-inch option—and that 15-inch model comes equipped with a custom AMD Ryzen processor that’s claimed to give it the fastest graphics performance of any laptop in its class.

The 13.5-inch version ships with 10th generation Intel Core processors for a big performance boost over last year. The Surface laptop signature Alcantara fabric keyboard is still available as an option, but if you prefer smooth metal, the company is also offering an all-aluminum design. USB-C connectivity is here for the first time, and the trackpad is 20% larger. For those who worry about the lack of upgradability in ultraportable laptops, the Surface laptop’s drive is removable.

Microsoft says the new Surface Laptop 3 is twice as fast as the previous model and three times faster than a MacBook Air. Despite the speed boost, battery life is all-day and its new fast-charge capability gets to an 80% charge in one hour.

At this point, the Surface laptop is one of the most compelling choices among ultraportables, whether you’re looking for style or performance. Microsoft is really covering all the bases here, and the ability to upgrade the storage and quick-charge the battery are nice touches.

After six generations of perfecting the design, how can Microsoft improve the Surface Pro tablet? Like the latest Surface laptop, the Surface Pro 7 is also getting USB-C connectivity. Otherwise, look for everything you like about the Surface Pro to remain largely the same, with the addition of more powerful Intel processors (10th generation Intel Core CPUs are now an option).

Okay, so maybe they could do more to push the envelope with the Surface Pro …

Microsoft also unveiled the all new Surface Pro X. Just 5.3 mm thick and weighing only 762 g, this new 2-in-1 tablet features an edge-to-edge 13-inch PixelSense display, USB-C, replaceable SSD storage, fast-charging capability and LTE cellular wireless. Physically, its the same size as the Surface Pro 7 (although with rounded edges), but minimizing bezels means a 13-inch display instead of the Surface Pro 7’s 12.3-inch panel. And the specs for that new PixelSense display look impressive as well: 2880 x 1920 resolution, 267 PPI and a 1400:1 contrast ratio.

Where things get really interesting is inside. Microsoft talked about the Surface Pro X being at the intersection between smartphones and computers and the company was serious about that. Its custom Surface SQ1 processor is an ARM chip designed by Microsoft and Qualcomm’s Snapdragon engineers, and features what Microsoft is calling an “integrated AI accelerator.” The GPU on this processor is capable of over 2 teraflops of processing power.

A new Surface Slim pen was introduced and it slots into the top of the Surface Pro X Type Cover, where it also recharges.

Also announced were new Microsoft Surface wireless earbuds, the company’s first true wireless earbuds. They feature prominent round touch pads and could be the ultimate Office user accessory, with support for Office Dictation and the ability to advance PowerPoint slides with a tap. Of course, they’ll play your Bluetooth streamed music as well.

Looking to the Future with Surface Neo and Surface Duo

To end the Surface event, Microsoft showed off what could be the next big things in Surface devices. The first is a hinged, dual screen tablet with a removable, Bluetooth wireless hardware keyboard, Surface Pen support and an Intel Lakefield processor. It’s being called Surface Neo.

The hinge allows 360-degree movement, displays each measure 9-inches diagonally and a Surface pen attaches to the back magnetically, where it also charges. Surface Neo weighs 655 grams and Gorilla Glass protects what is said to be the thinnest LCD display(s) ever created. It runs a version of Windows 10 optimized for dual screen devices called Windows 10 X.

Showing that it’s taking this whole folding, dual-screen thing seriously, Microsoft also showed off a tiny device dubbed the Surface Duo. This one has 5.6-inch displays, it can be used as a phone and Microsoft worked with Google, so it runs Android apps. This is going to make things very interesting … When will the new dual-screen, folding Surface Neo and Surface Duo be released? Microsoft says we’ll need to wait a year or so, until the 2020 holiday season.

How do I pre-order? 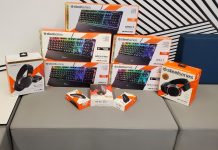 Find the perfect gift with Sony and enter for a chance...