Convertible tablets have had a hard time winning out as 2-in-1 laptop replacements, but Samsung thinks it put together the right combination with its latest Galaxy Books.

Samsung has two versions of the Galaxy Book—a 12-inch and 10.6-inch. Both are designed the same way, yet differ a little on the specs. The key takeaway is that the company presents both as full-fledged laptop replacements, with pen input to boot.

Unlike other 2-in-1 convertibles, the Galaxy Book comes off as a tablet first, and laptop second. The tablet itself (in both cases) comes off like an Android tablet, yet runs a full desktop version of Windows 10. The 12-inch version weighs a modest 1.66 pounds (754 grams), which isn’t bad, but does feel heavy after holding it for a period of time.

Odder still is the plastic body. For a premium 2-in-1 convertible, I was a little surprised that metal wasn’t used instead. Was it a matter of reducing the overall weight? Cutting costs? I’m not sure, but at least both models don’t feel cheap.

Connectivity ports are fairly limited. You get two USB-C ports (the 10.6-inch model only has one), of which one is needed to charge up the battery, plus a microSD card slot and headphone jack. Stereo speakers flank the screen, though face out laterally rather than face forward. They’re still decently loud, at least. If you are looking to use this with a projector or monitor, you will need an adapter to make that connection.

The part that annoyed me the most was propping up the keyboard case. Like other keyboard cases available in the market, the rigidity of the flap is crucial to how you lay out the device. There are a few ways to do it to change the angle, but without lying on a flat surface, neither device is especially stable.

This is really important for any 2-in-1, and why I’ve always appreciated the adjustments Microsoft made with the Surface line. A more rigid kickstand, solid keyboard and super fast connection make that transition feel innately seamless.

Here, the Galaxy Book requires a little more preparation. No angle is especially fixed, like a kickstand or latch provides, so I always had to take the extra time just to prop the thing up. But the case serves a major role as a buffer for when the tablet gets hot, which happens when pushing the processor. The two models diverge here, partly because of their respective specs, but also because of the productivity each one offers. While I didn’t mind the size of the 10.6-inch model’s keyboard, I didn’t like it for typing longer documents, like this review, for instance. The 12-inch had a real advantage when it came to getting things done that way.

Except that the its folio design offers no incline. It has to lay flat no matter what, and that’s not always ergonomically helpful. Other 2-in-1s with similar keyboards have some lift to elevate, creating a more natural resting position for hands to type.

Trackpads for both devices weren’t bad at all. I’m always cautious with these things because PC manufacturers are anything but uniform on it. Navigating with it wasn’t an issue for me.

Samsung built both models to be versatile, and beyond typing, there is touchscreen input and the S Pen, which I’ll cover after this. I wasn’t surprised they felt good to use because Windows 10 is well suited to both key and touch input.

The 12-inch’s Intel Core i5 processor is a practical improvement from the 10.6-inch’s Intel Core m3 chipset. Faster and more robust, the 12-inch is undeniably better for any user looking to push things a little more. It also has double the RAM (8GB) and four times the storage capacity (256GB). Unsurprisingly, I benefited from being able to multitask more, while worrying less about storing files.

Granted, the microSD card slot on both units can handle up to an extra 256GB, but that’s less of a concern on the 12-inch model.

I could only conclude that both devices are best suited to mixed workloads that don’t require too much horsepower for one app. Video editing isn’t going to be pleasant here. Photo editing will be okay. Word processing, browsing, streaming—more palatable. If you’ve ever experienced the S Pen on Samsung’s Note smartphones, translate that over to the Galaxy Book. Mind you, it’s not exactly how it is on the Note 8, for instance. First, this is Windows 10 and not Android. Second, the pen serves a more basic purpose as a means to navigate.

Pressing the button while close to the display reveals a small menu. In it, you have Create note, View all notes, Smart select, Screen write and Show window. The first two are basically jotting down notes or doodling. Smart select is to cut out a specific part of the screen and either write over it—or for video—create a GIF. Screen write takes a full screenshot that you can write over. Show window only really works when you’ve tethered the Galaxy Book to another monitor.

At all times, the S Pen can act as an alternative to navigate the interface. It swipes reasonably well and the screen is pretty responsive to its touches. Tilt it when drawing something and it can thicken the line.

The pen’s very presence creates a bit of a conundrum, though. Where do you put it? Samsung includes a holder that attaches to the bottom of the keyboard. It sticks decently well, but is not what I would consider rigid. More often than not, I chose to take the holder off and just keep the pen in my jacket or bag pocket.

Samsung claims the 12-inch Galaxy Book can go up to 11 hours per charge, but that’s simply not  the case in real-life conditions. Sure, I went up to 10 hours streaming video, but once I tried mixed usage, it went down.

For example, battery life cut down more than a few hours if I was browsing, streaming, working on documents, photo editing and other miscellaneous tasks. At one point, because I had brightened the screen a little more, I barely hit six hours.

The 10.6-inch Galaxy Book isn’t all that different. Samsung rated it at up to nine hours per charge, but I would say five is more accurate for mixed usage. Purely streaming video at moderate brightness? Definitely over seven, at the very least.

There is quick charging to go from empty to full in three hours, but I know that won’t sound “quick” to some of you reading this. Either way, you can stretch out a full day’s work on either unit, only that you will need to modify how you use them to get that far.

The portability isn’t bad, though I would lean towards the 12-inch model if productivity is important to you. The key specs and performance metrics result in a better experience from my own testing. 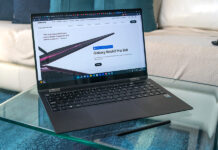