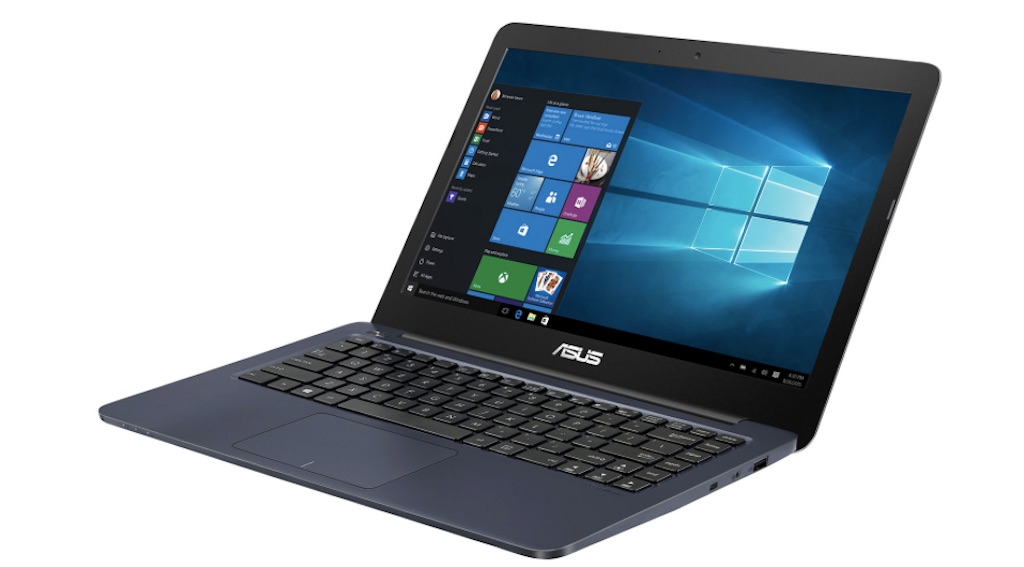 Frankly, I wasn’t expecting a whole lot when I unboxed the ASUS Eeebook E402S. After all, this is a laptop (a netbook, really) that costs about as much as my last iPad did. Manufacturers have to do a lot of trimming to get the selling price of a laptop down that low, and the wrong choices can result in a computer that’s a series of compromises. Not to put too a fine a point on it, these laptops can also be a tad on the ugly side. 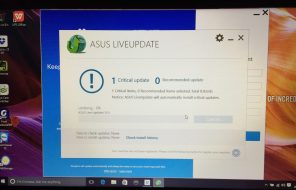 I have to admit, when I pulled the laptop out, I was pleasantly surprised.

It’s an unusual size, with a 14-inch display. Despite being larger than 13-inch notebooks, it somehow manages to still feel compact. It’s particularly thin (2.29 cm) or skinny (1.81 kg), but ASUS did a nice job on the design and it somehow feels smaller than it is.

There’s no mistaking the fact that this is a budget laptop—the shiny (fingerprint magnet) plastic case and 1366 x 768 (HD) display resolution give that away pretty quickly. Check the CPU sticker and you’ll see there’s a Pentium inside instead of an Intel Core CPU, but the Eeebook E402S doesn’t feel underpowered and under-specced the way many Chromebooks and Windows netbooks do.

Setup was quick, easy and guided. Even after critical updates were detected (automatically) and installed, I only spent about 15 minutes from unboxing to being basically operational.

Just as the wrong choices can sabotage a laptop, the right choices can make an affordable laptop seem like it’s in a different class altogether. 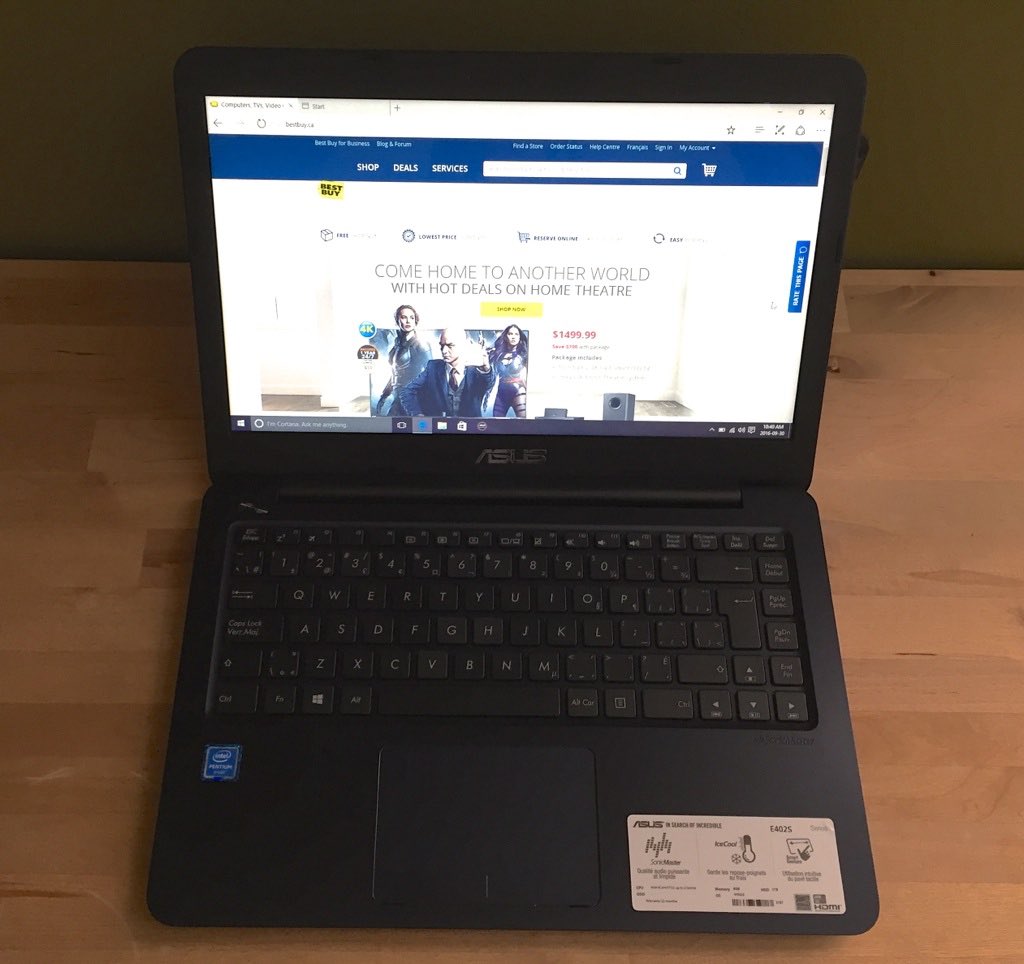 ASUS did a good job with the Eeebook E402S. The case is plastic, but rather than go with budget black, ASUS chose a dark, navy blue. In some light you can see the blue, sometimes it looks black, but the choice adds some visual interest. The display is only HD, but it’s a decent enough backlit HD panel and by going with a 14-inch screen (instead of 15.6-inch inches), the view is still bigger than with ultra-compact netbooks, yet small enough that the pixels don’t make it seem particularly grainy. You won’t mistake it for a 4K display, but it’s better than many I’ve seen in this price range.

Speaking of the display, its side bezels are also noticeably thinner than the top one. This may not be symmetrical, but helps to make the Eeebook E402S case smaller, contributing to its feeling of being more compact than expected. Mounted in the top bezel is a VGA webcam, good enough for video chatting and SonicMaster audio is much fuller than thel tinny sound you usually get with budget laptops.

The CPU may be a Pentium instead of a more powerful (and more expensive) Intel Core chip, but it’s the latest generation Intel Braswell SoC design. Combined with 8GB of RAM onboard (another good choice by ASUS), the little laptop feels zippier than many competing systems.

Storage is another area where ASUS guessed right. Some laptops (and most netbooks) that target this market ship with a 32GB or maybe 64GB SSD. This gives them a performance boost, especially when reading and writing files. However, it comes at a big cost — those small capacity SSDs fill up rapidly. In this case, the Eeebook E402S is equipped with a 1TB, 5400 rpm hard drive. Access is slower, but that’s a huge amount of storage. You can save a ton of movies, music files and digital photos on this laptop without thinking twice about running short on space. In another nice touch, the company included an easy access port on the bottom. Remove one screw, pop off the door and you can swap out the hard drive for an SSD if you decide later on that you want a performance boost.

ASUS also kept a full array of expansion and connectivity ports, so attaching accessories and peripherals won’t be a problem. There’s even Ethernet, if you want a wired connection for speed. That 14-inch size also let the company squeeze in a full-sized chiclet keyboard that’s quite comfortable to type on. Plus the keys are rated for 10 million keystrokes, so it’s tough enough to take on kids.

A Nice Student or Casual Use Choice, if Your Expectations Are Reasonable

The ASUS Eeebook E402S would be a nice choice for a student who needs an affordable, compact laptop for school. It’s also up to typical, casual home use and I would consider it small yet functional enough that you could take it with you to a cafe or library to get a little work done—there’s actually a Kensington lock slot there for that purpose. 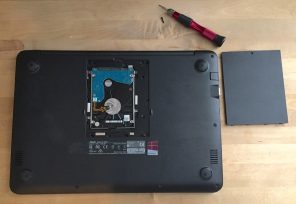 You do have to set reasonable expectations if you’re looking at this laptop, though. The CPU is enough to get basic tasks done, but gaming isn’t in the cards. Even running multiple applications simultaneously can be pushing it. The display is adequate, but it’s not going to take your breath away. Web surfing and even streaming HD video is snappy enough, but with Wi-Fi topping out at 802.11n, downloads aren’t as fast as you’d get with the new 802.11ac. Battery life is in the six hour range, not all-day. The case is plastic, not metal, and it gets smudgy fast.

Considering what you do get with the ASUS Eeebook E402S though, the price is certainly right.

I think it would make a great student laptop, able to handle homework assignments, social media, web surfing and video streaming. With three kids, I could get one of these for each of them for less than I paid for my last laptop. If you’re in the market for a Chromebook or an affordable, compact Windows laptop, you should check out the ASUS Eeebook E402S.