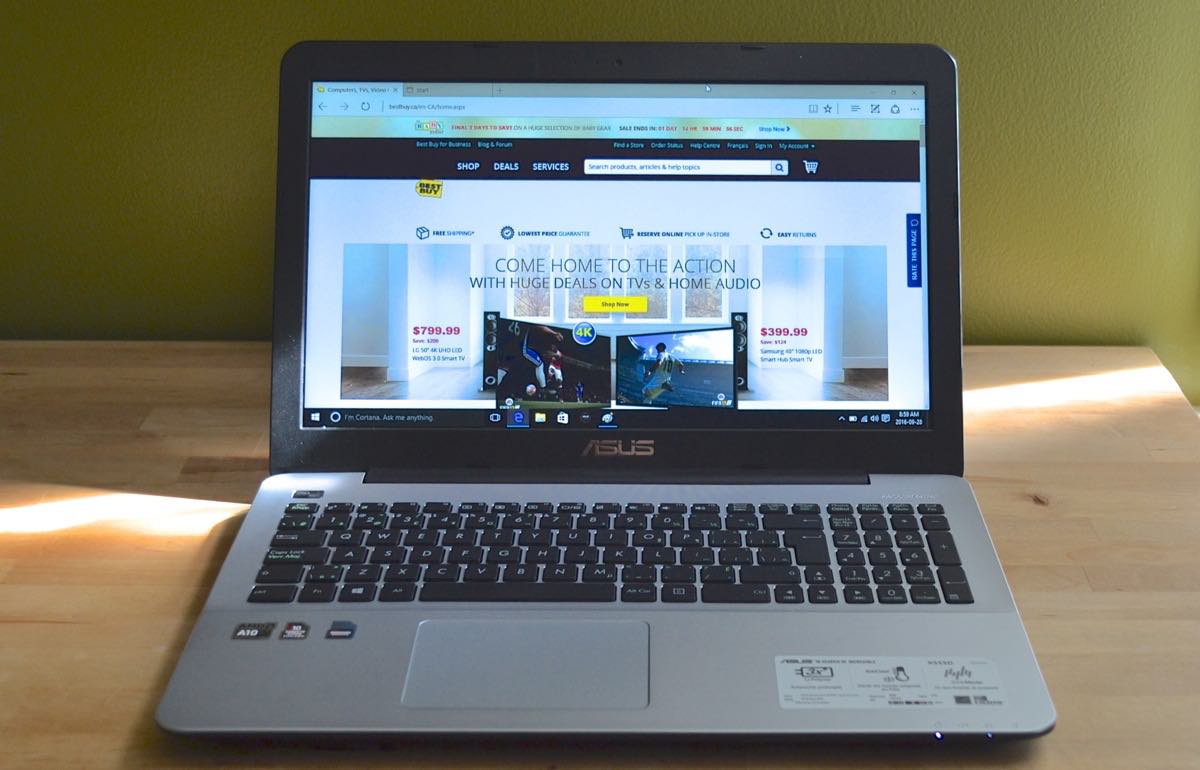 In the Box and Setup

If you want a laptop you can unbox and run with, the ASUS 555D is a pretty good example of simplicity. 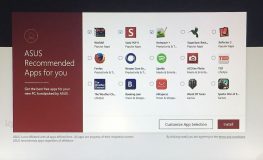 Pop the box open and you’ll find the laptop itself and a modestly sized power adapter. The adapter plugs directly into an outlet and if you put it on the bottom plug, the top one should be unobstructed. However, this does mean you won’t be able to easily conceal the adapter behind a desk.

Plug the laptop into power, fire it up and you’re walked through the Windows 10 basics of setting up a login account and connecting to Wi-Fi. As part of the initial setup, the laptop even offers up a collection of ASUS-picked apps you may want to install (they’re both free and optional).

Despite the fact that the ASUS 555D is mostly plastic (I think the power button was metal), the brushed effect black upper case and contrasting silver deck add a touch of style to this laptop. The full-sized keyboard is comfortable to type with — it uses chiclet style keys with 1.6mm of travel. The full-sized touchpad supports multi-touch input for those who like using Windows gestures. The display is big, and the HD panel offers respectable quality, but it’s not on par with the displays in more expensive laptops. Resolution is limited to 1366 x 768 pixels. If you sit close to a 15.6-inch display at that resolution, it’s not going to look particularly sharp. Colours are also a bit muted, but I did find the viewing angles were good. 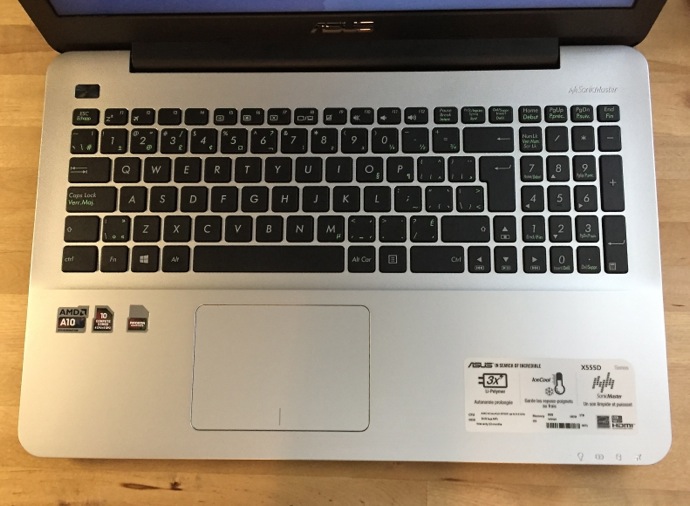 Performance is decent, but it’s not going to blow you away. The AMD A10-8700p processor is roughly on par with an Intel Core i5 CPU, so it has the horsepower on tap to handle the kind of tasks typical casual computer users are going to throw at it. Productivity software like Microsoft Office should not be a problem, but between the CPU, integrated graphics and the HD display panel you probably won’t want to be editing video on this laptop. The 5400 RPM hard drive can also result in slowdowns if you’re reading or writing large files.

Wi-Fi access is also slower than many current machines, since it doesn’t offer 802.11ac support. The battery lasted in the five to six hour range, when streaming video.

Who is This Laptop For?

Before you think that I’m downplaying the usefulness of the ASUS 555D, I want to point out that it may not be a fire-breathing performance laptop, but it is a very capable machine for casual home use or for many students.

There are lost of small touches that this demographic will appreciate. The hard drive may not be as fast as an SSD, but it offers a whopping 1TB of storage. That’s a lot of music, movies, photos and school assignments. The display is fine for working on homework and casual web surfing. Stream a movie and sit back a few feet from it and the video looks pretty good.

Despite the lack of 802.11ac, streaming an HD video from YouTube over its 802.11n Wi-Fi was smooth, with no pauses for buffering. With the built-in optical drive (increasingly a rarity in laptops), you can play DVD movies too. SonicMaster technology combined with ASUS AudioWizard with presets for music, movies and more makes the most of your listening experience. And if you intend to use the ASUS 555D for extended periods at home, you can always connect it to an external monitor using HDMI and the video output is at Full HD. Six hours or so of battery life can’t compare to an Ultrabook or MacBook, but it’s enough to get a student through a day of classes. 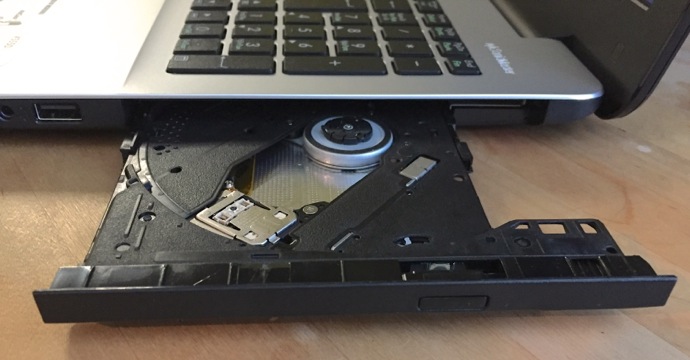 This laptop also offers design touches that ensure a long life. For example, the keyboard is rated for 10 million keystrokes. And ASUS says the Li-Polymer battery should last 2.5 times the lifespan of a traditional Li-ion battery.

While it’s not a gaming laptop b any stretch, you could do some light gaming on the ASUS 555D. AMD says its A10 CPU—with 4 computing cores and Radeon graphics with 6 GPU cores—will outperform some competing Intel Core mobile CPUs even when equipped with a discrete video card.

Finally, unlike many ultra-thin laptops that shed ports in the name of a slimmer profile, the ASUS 555D offers a full complement of ports for connecting accessories and peripherals. 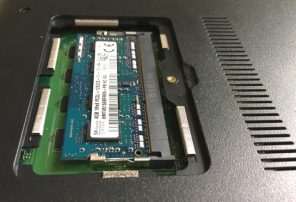 Like most laptops, you don’t have the option to upgrade the ASUS 555D’s CPU or graphics capabilities. The battery is also a non user-replaceable version. You should be able to upgrade the hard drive with an SSD for a performance boost, although doing so would require removing the bottom case.

ASUS does provide a small access door to upgrade the RAM, but it took me a few minutes to figure out what was going on with it. The company disguised the screw that secures the door with a sticker. Remove the sticker and the screw is revealed, but until I discovered that, I was wondering if the door was purely decorative …

Is the ASUS 555D the Right Laptop For You?

Ultimately the question of whether the ASUS 555D will meet your needs comes down to the classic equation of features versus price.

If you need a full-sized laptop with a decent keyboard and the specs need to take on basic computing tasks—including light duty online and PC gaming—then the ASUS 555D should work for you. It will give you a competent laptop at an affordable price that does have some future upgrade possibilities if your needs grow. However, if your requirements are more demanding, you’ll want to move up the ASUS range to a laptop with higher end specs like a Full HD display, SSD and a more powerful CPU.