When it comes to wearing an affordable smartwatch, few come as inexpensively as the one from NDur does. The budget-conscious device isn’t about squeezing in every possible feature, or reinventing the proverbial wheel. It just sticks to basics, and adds a couple of extras you might not otherwise expect.

I’ve tested a lot of tech devices in my time where I knew little to nothing about the company before receiving it. NDur is one of those. I got the play on words—“endure”—and it was evident what its smartwatch could potentially be. It looked like something that could be great value, except it wouldn’t matter as much if it wasn’t especially good at what it was supposed to do. With an open mind and measured expectations, the NDur Smartwatch can be useful to an active or leisure lifestyle.

Despite its modest origins, the NDur Smartwatch looks better than it might otherwise seem on paper. The 1.4-inch IPS display on the squared form factor features decent 240 x 240 resolution, but give it a closer look, and you notice that it’s not quite as smooth or detailed. The button on the side acts as a way to get back to the home screen. For the most part, though, you will be using the touchscreen to swipe and tap your way around.

There is no onboard microphone or speaker, so while the watch handles notifications, there isn’t a way to verbalize a response. Not surprising for a budget smartwatch, and no knock on NDur. The IPX7 rating does give it a pretty durable frame, one capable of handling depths down to three metres. No saltwater, however, as there’s a high likelihood salt and sand will seep into the watch itself. Stick to clearwater.

The silicone strap is standard fare for a smartwatch. Not too thin, nor too thick, it strikes the right balance, and is comfortable to wear. NDur offers a variety of colours to add some personalization. The lugs are also standard size, so you could probably replace the strap with another one that fits. It’s just that the mechanism NDur uses is different. Instead of a protruding latch to slide it out, it uses a pin release that requires a tool to ultimately release it.

There’s an impressive number of sensors in the watch to consider. The optical heart rate sensor is standard stuff now, though I was surprised to see that both blood oxygen (SpO2) and blood pressure sensors were also available. And you could use them at anytime. Central to setting up the NDur was the dedicated app for iOS or Android: Da Fit. The name seemed a bit off to me for this device, but in any case, the app syncs over the data the watch tracked while being worn. The app offers limited customization, though there are a lot of watch faces to choose from if you want to change up the look a little bit.

By default, you have the option to allow all notifications. Or, you can go into the app and manually select the apps you want from the supported list. Beyond phone calls and messages, apps like Facebook, Twitter, WhatsApp, Skype, Instagram, WeChat and KakaoTalk are available. When on, any notification from that app will appear on your watch, so you don’t have to look at your phone every time.

One convenient part is while wearing headphones, you can answer calls on your watch and start talking through the headphones. No need to reach for the phone at all. As I noted, you can’t do much to respond to messages, and it does matter what app you use for them to begin with. For me, I use Signal as my texting and messaging app, and because of that, I never saw any messages appear on the watch.

With music, NDur builds in an app to handle that, except it’s not agnostic to what app you’re listening from. For example, when I streamed from Spotify, the app had no control over what I was playing. Not even to pause or skip a track. The only time I had any modicum of control was when playing music files stored on my phone through my phone’s own music app. Not exactly an ideal use case in 2021. NDur doesn’t offer an extensive list of exercises. You get to pick from walking, running, cycling, skipping, badminton, basketball and football (soccer). That’s it, there are no others, and none were added during my time testing the watch. If that list is too short or not varied enough, you can certainly find what you’re looking for in other models, including Fitbit.

But if the basics are enough, NDur has those covered. Step tracking is pretty good, though I felt it was a bit off at times. The heart rate monitor seemed to also clock me higher than a comparable smartwatch would, yet could also be impressively accurate at other points.

What’s interesting is that NDur includes sensors you wouldn’t normally find. I’ve seen blood pressure monitors on smartwatches before, but they were cumbersome to use. This one reads it quickly, though I can’t speak to its efficacy. I have a hard time buying that a smartwatch can be as accurate as a proper monitor, but even if it’s in the ballpark, that’s not bad for an affordable device. The same is true of the SpO2 sensor, which can work anytime, not just while you sleep.

Like any smartwatch, those sensors aren’t meant to replace medical devices, but if there is an alarming number that pops up, they may at least act as a warning sign. From an exercise perspective, NDur holds up pretty well. Perhaps not as accurate as more expensive brands, but hardly a pushover. If your interest is only in a couple of the included exercises, you may like the way it works.

I should also mention that NDur lets you funnel all your activity data to Google Fit, if you prefer to use that. There, you can see more metrics and a better interface. I have mixed feelings about the NDur Smartwatch’s sleep tracking. There were nights where I thought it was dead on, and other times where it thought I was sleeping when I wasn’t. I get that lying down could confuse a device like this, but if I’m consistently moving, picking up my phone, or talking, I would assume it can tell that I’m probably not motionless. And yet, it once clocked me sleeping for just under two hours. Other times, it didn’t do that at all.

Overnight, it was mostly spot on with my slumbering duration. There were nights I forgot to wear it, so didn’t get a score for every night. Even if I had, there isn’t a great deal of context beyond the score itself. The colour-coded chart provides an idea of whether sleep was good or not, but it doesn’t go much further. Google Fit could possibly offer something more, though I think you’re just going to get the basics here.

NDur rates battery life at up to seven days per charge, and I’d say that’s pretty accurate. If you use a lot of exercise tracking, that might shave a day or two off that mark, but either way, you could expect a good five days or more before charging again. Since there’s no GPS or even Wi-Fi connectivity here, the NDur Smartwatch isn’t packing battery-guzzling features, like others do.

Notifications also play a role. The more you get and keep that watch buzzing, the more it saps battery life, too. This is highly relative, because getting a few a day won’t make much of a difference. But if dozens are coming in throughout a day, there will be an impact on the battery over the days you wear it.

The NDur Smartwatch doesn’t pretend to be something it can’t be. It’s not a premium smartwatch offering the latest bells and whistles. It’s a simpler product that sticks to basics and doesn’t stray too far. The extra sensors for blood pressure and blood oxygen are nice to see at this level. It’s even neat that there’s a camera component letting you use the watch as a shutter. Just a shame that it’s a camera app built into Da Fit, rather than integrating with the phone’s own app.

If your needs are modest, the NDur should treat you just right. But if you need more, you will have to look elsewhere. The NDur Smartwatch is available now in ghost black, smokey grey, baby blue, rose gold and pink. The included strap is enough to fit large and small wrists. 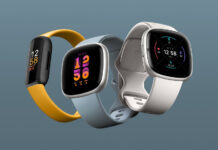 Fitbit announces 3 new wearables to add to its lineup