Today I’m reviewing the smallest projector I’ve ever held in my hand—the XPRIT portable smart cube projector. At just 2.5″ cubed, it fits easily in the palm of your hand, as you can see from the photo above. And as you can tell by the name, this is a smart projector that comes with the Android operating system to which you can add apps from the Google Play store like YouTube, Netflix, Amazon, and whatever else you happen to use.

The XPRIT smart projector cube has an internal battery which you can charge using the USB cable and plug adapter which are included. The projector has a 1/4-20 thread which is the standard size used in photography to mount cameras on tripods. Also included in the box is a tiny little tripod that allows you to angle the tripod towards your projection surface. This is a very handy accessory and one that you’ll want to bring with you wherever you take the projector. Finally, you get a remote control, as featured in the video review, which you can use to control the projector.

How to set up the XPRIT cube projector

I found setting up the projector super easy. YouTube was already installed so I had tonnes of content at my fingertips to test the projector with. I did need to connect it to my Wi-Fi network, which is always a bit of a nuisance without a keyboard attached, but thankfully I only had to do it once. When you project the image onto the wall it might be out of focus at first so you’ll need to bring it into focus using the dial on the side that you can just about see in the image below.

If you project the image onto a flat surface at an angle you’ll find that the perspective is a bit messed up, but thankfully the XPRIT portable projector has a feature called keystone correction which allows you to correct the perspective and cast a perfect rectangle.

The resolution of the XPRIT portable projector is 854×480, which is much less than your typical Full HD TV at 1920×1080. Nevertheless, you can project an image anywhere between 16″ and 110″, which is a really useful range. So you can cast a small image on the wall in front of your desk, for example, or cast a huge image on the wall in the living room to entertain the whole family.

The XPRIT smart cube projector has a built-in speaker, but it’s not very powerful, which isn’t entirely surprising given the diminutive size of the cube. There is, however, a headphone jack that allows you to plug in headphones for a more immersive experience. You can also use this output to connect to a bigger speaker, something like the Ultimate Ears Megaboom 3. In terms of image quality, the projector has a contrast of 1000:1 and projects 50 lumens, which is a difficult number to gauge, but basically, you’ll find that the further the projector is from the surface and the larger the image, the more faint the image will be. Conversely, a smaller image will appear brighter. You can always enhance the brightness by turning down the lights in the room. I have to say I wasn’t too impressed with the overall image quality though. It felt very contrasty to me and lacking in subtle colour nuances and gradations between highlights and shadows. Of course, you need to keep your expectations in check here based on the size of the unit, but as long as you know what you are getting in to, you probably won’t be too disappointed.

There are actually a number of different ways to access and operate the features and apps of the XPRIT smart cube projector. The supplied remote control works really well, but you can also connect and use a Bluetooth mouse. Finally, if you’re unable to use a mouse or the remote for some reason, you can use the buttons on top of the cube. This is the least user-friendly method but I really appreciate that you have three different options.

Besides using the projector to watch videos, I love that you can very easily use it to view photos and slideshows. If you plug in a USB flash drive or an external drive loaded with photos you can easily navigate to the folder containing the photos and choose to view photos individually or as a slideshow. The projector also has 8 GB of internal storage to which you can add your own photos or videos. I also really liked how easy it is to mirror your own device to the projector. Using the projector this way makes it super easy to access your favourite apps, without needing to add them to the projector’s OS. Finally, I was really impressed with the battery life. You can run the projector for up to 3 hours on a single charge, which is plenty enough time to watch most movies.

I’m sure you have figured by now that the XPRIT smart cube projector is not a substitute for your 4K Ultra HD TV. It is, however, an awesome projector to travel with, both because of its portability and also because of its battery life. You could take this projector anywhere—even camping! Of course, you might need to preload some content if you’re out of cellular service, but it’s great that that is an option due to that internal storage. You could also use the projector for business presentations too, and because it’s so easy to set up, you are unlikely to find yourself in an awkward moment due to technical difficulties.

All in all, I have to say that I really enjoyed testing the XPRIT portable smart cube projector. Easy to set up and easy to use, I loved the versatility of this projector, and I felt like I only scratched the surface of what was possible.

Check out the full range of projectors and accessories available at BestBuy.ca 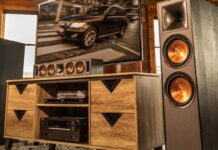