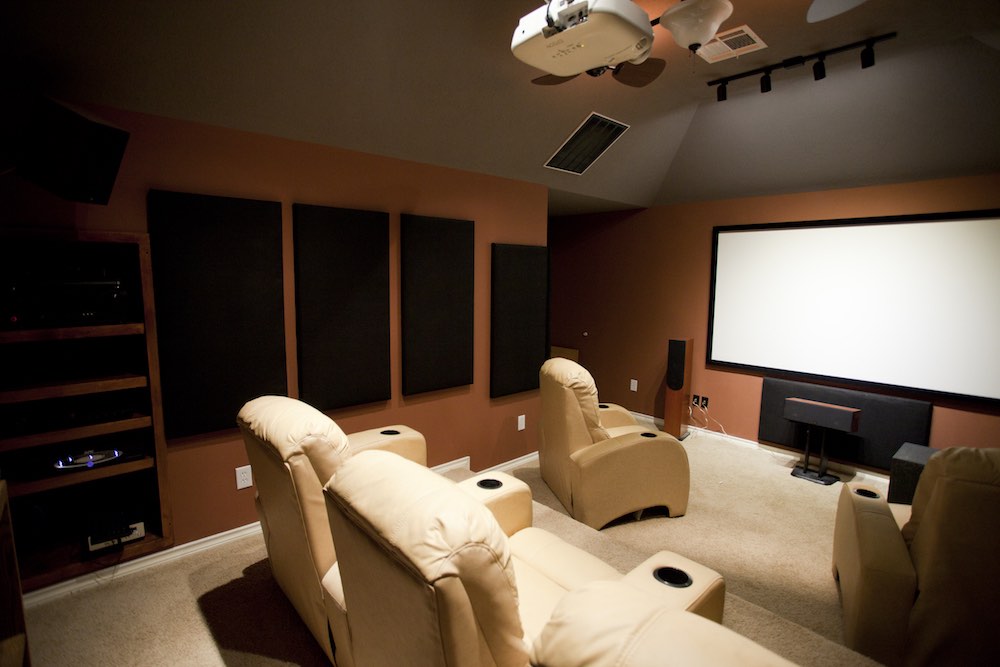 There are three instances that are the most common reasons for choosing a projector: building a dedicated home theatre, building a media room when you’re on a budget, and having fun with projectors outdoors. Here’s how they break down.

A dedicated home theatre space is exactly that: a room that you’ve set aside for enjoying the visual arts of movies, TV, and video games. This isn’t a dual purpose room (though no one’s going to give you a hard time for integrated a concession stand and a bar); it’s a focused space that revolves around image and sound.

In a space like this you’re actively choosing both size and picture quality; that means you’re going to want to choose a projector screen that fills the space as much as possible while also accommodating your front audio channels (either through a high-end sound bar or LCR separate speakers for the Left, Centre, and Right channel. You may opt for a pull down or automatic screen that will descend when activated, but for the very best results you’ll want a fixed screen that is attached to the wall. While tab-tensioned roller screens are the best option there, they can’t compete with the uniformity and rigidity of an integrated on-wall screen.

Your home theatre space should be blacked out. While it’s not always possible to eliminate windows, curtains and shades can reduce light to next-to-nothing, helping to ensure that the image that you get from your projector is perfect.

Ambient light is the enemy of projectors, and unless you’re opting for a high-end professional series laser projector, the best way of dealing with light is to eliminate it. Add those shades or drapes to your windows, and consider side and bottom channels to guide your shades and further reduce light if possible.

A dedicated space gives you the atmosphere (low light!) and the space to install a permanent screen that will give you the results you’re looking for.

There’s a new phenomenon sweeping the nation: the conversion of living rooms and family rooms into “media rooms”. More open than a theatre, and embracing technology more than the previously listed room types, the media room is an intersection between enjoying your media and socializing with friends and family.

The Media room is typified by being open and multi-use; unlike the closed-in space of a theatre, the media room is typically more open concept; this includes being open to other rooms (like a living room or a family room) sharing that space. Media rooms are also typically less “light-proof”; whereas the theatre spaces are blacked-out, media rooms may share lighting with other rooms in the home, and in many cases will have windows that may not have black-out shades.

A projector here is still usable, however. The challenge is overcoming the obstacles put in place, with ambient light being the primary issue. A projector with a higher lumen rating will output more light, allowing you to overcome part of that issue; by essentially putting more light on your screen, you can “blast through” the issue of other light sources being present. Newer projectors are coming with extremely high lumen ratings (moving from the high hundreds into the mid-to-high thousands) now, and consumer versions of these projectors are becoming more accessible.

Another way to overcome that issue is by using a higher-contrast screen; many projector screens come in white, while high contrast screens use a reflective grey tone. By using grey instead of white you are already helping the darker areas of your scenes by reducing the impact of external light sources that wash them out. 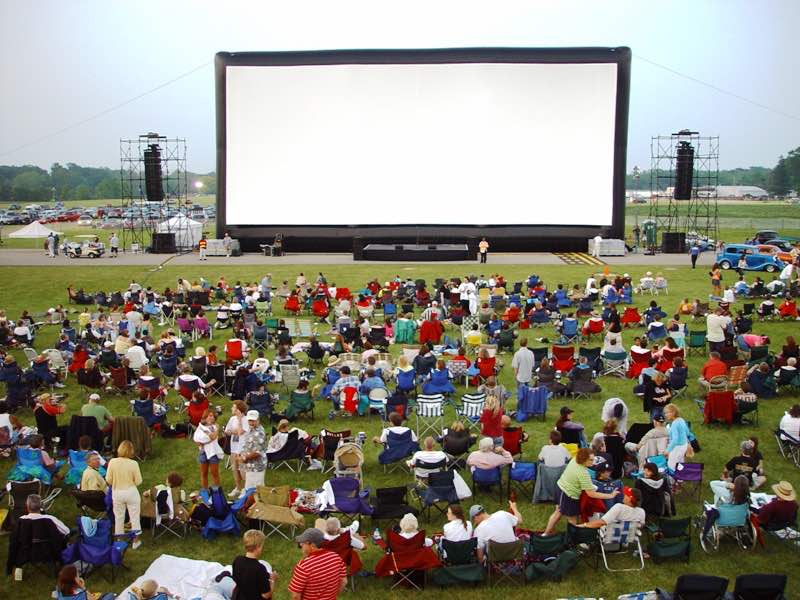 There’s something utterly charming and truly fun about an outdoor movie night; whether you’re projecting onto the side of your home or onto a massive white sheet, you simply can’t beat a projector for this experience. Let’s face it: hauling your TV outside isn’t easy or compelling.

An outdoor projector setup is essentially the same as your indoor projector setup; you’re going to need your projector, a source (typically a Blu-ray player or gaming system), power (this is where extension cords come in handy, and audio–this one’s the biggest challenge for outdoor systems, as filling the space with sound can be hard to do.

If you’re in the earlier evening hours, you’ll want to take the same approach as with a media room: a bright, high-lumen projector, coupled with a screen surface that is darker than white. Later in the evening (if you live in a rural area) you may be able to get away with a more theatre-like experience; city dwellers with lots of light pollution will always find it challenging to overcome the light issue, so bright projector/darker screen is a good choice there.

To recap: the authentic theatre experience can be had in a number of ways, but when you absolutely must have the largest picture size on a relatively modest budget, starting with a projector is the only way to go. There are a number of moving pieces to the equation: where are you going to put your projector, what are you projecting on, and most importantly, how much light do you have int he room with you. Gathering all of those pieces of information and solving that puzzle can lead to a great projector experience! So pick your place, your projector, and get watching. You might want to call Geek Squad to give you a hand installing it in the ceiling if you don’t find yourself that handy.

Take a look at the various projectors found at Best Buy.