Sony’s upgrade to their entire line of XB Bluetooth wireless speakers has landed just in time for summer beach season. These new speakers, the Sony SRS-XB12, SRS-XB22 & SRS-XB32 EXTRA BASS Splashproof Bluetooth Wireless Speakers replace some of their existing offerings: the SRS-XB10, SRS-XB21 and SRS-XB31. This review will breakdown the design, features and performance of these three brand new Bluetooth speakers.

The XB12, XB22 & XB32 speakers each have their own size, set of features and relative price. The XB12 (SRS-XB12) is the smallest speaker in the family and measures about the size of a Mini can of Coke. The device weighs 8.6oz and its dimension are 3″ in diameter x 3 5/8″ in height; this device can fit in one hand. It comes with a detachable strap that lets you hang the device anywhere. Inside the speaker, the device houses a passive radiator and a 1.81″ mono speaker between its soft-touch plastic body and hard mesh top.

The XB22 (SRS-XB22) is the middle sibling in this family. At the size of a cylindrical pencil case, this device weighs just over a pound (538g). The XB32 shares the same basic design aesthetic with the XB22. At the size of a small clutch, the device weighs about 2lbs. Like the XB12, they both sport a body comprised of soft-touch plastic, however, the XB22 and XB32’s speaker mesh is softer than the XB12. Interestingly, these devices have a very similar set of guts; they both work with dual passive radiators and two full-range speakers. The smaller XB22 sports a set of 1.65″ (42mm) speakers whereas the larger XB32 contains a set of 1.89″ (48mm) speakers. This results in a similar sound profile; more on that later in the review.

These new speakers from Sony are upgrades, plain and simple. One of the big changes between generations of speakers is the improved water resistance. The past generation of these speakers were IPX5-rated devices whereas the new set of devices have been tested to IP67. These devices can be submerged in water or brought to a sandy beach without an issue. The Sony XB12, XB22 & XB32 all share a series of common features but have a few selected features that are exclusive to the largest models (XB22/XB32).

Outside of the new waterproofing, all of these Bluetooth 4.2 devices sport Sony’s EXTRA BASS feature for an extra bass boost. From a connections standpoint, they sport an AUX port and charge via micro USB. I was a little disappointed that the device hasn’t adopted USB-C in 2019 but it’s a minor issue.

The battery life on some of the devices in the family are very impressive. All of the devices can deliver enough juice for a shift at work, but battery life takes a hit depending on how many of the added features have turned on (like LIVE SOUND or device lighting, for example). The bare-bones XB12 has a 16-hour battery life and the XB32 has a battery that can last up to 24 hours (14 hours with the EXTRA BASS turned on). The smaller XB22 only has a 12-hour capacity (10 hours with EXTRA BASS). The two larger devices offer a few additional features; some of them are useful and others are a fun party trick. Let’s start with the useful one: the LIVE SOUND feature. Without it, these speakers will shoot the sound in the direction that they are facing. When activated, the LIVE SOUND feature takes the unidirectional sound and turns it into a three-dimensional sound experience. It’s great when the speaker is placed in the middle of a room or outside, for instance.

Less useful are the lights and Party Booster features. Using the Sony Music Center App, you can unlock the full potential of the speaker.

First with the lights. By default, these lights will oscillate in colour and rhythm based on your musical choices. With the app, you can change the manner in which they move. With the XB32, you can even download a separate app, Fiestable, to get even greater control over your lighting colours. Secondly, the Party Booster allows you to strike five zones on the speaker to activate a series of gimmicky sounds (like drum sounds, for example). It’s fun the first time you discover the feature, but will likely be forgotten relatively quickly.

The next set of features for the XB22 and XB32 are the Wireless Party Chain & Sony Music Centre App. After connecting to the device (you can even use NFC on the XB22/XB32), you can chain the devices together either by using a physical button on the back of the device or through the app. Getting the devices to connect together was a little finicky and I had some connection issues with the app. Additionally, the app does not remember preferences for the Party Booster, for instance. Let’s hope some of these issues get worked out through future upgrades of the app.

As far as how they sound, the two larger speakers, the XB22 & XB32 have a similar sound profile. The XB22 sounded a little bit hollow by default when compared to the XB32, which had a slightly bass-heavy default sound. Both speakers sounded warm with clear vocals but you are able to customize the sound to your liking using the Sony Music Center App. Within the app, you can customize the levels of bass, mid and treble in your listening experience. I had an occasional issue with Bluetooth distortion on the XB-22 and occasional connection stuttering with the XB-32 in my testing environment. A quick disconnect and reconnect fixed both rare issues. The XB12, on the other hand, has a more V-shaped sound. It’s good for the size, but obviously can’t compete with the two larger devices. With this device, the mid-range gets buried a little by the bass and the treble. The device pumps out a good amount of bass and the treble that cuts through, but the mid-range gets a little lost. The XB12 is not connectable to the Sony Music Centre App.

All in all, these three refreshes of the Sony XB speaker line are welcomed additions to the waterproof Bluetooth speaker market. If you need a new Bluetooth wireless speaker for the pool or the beach this summer, check out the Sony XB22 & XB32. If you don’t need a loud and full sound and/or are seeking a device that can fit in a smaller space, check out the Sony XB12. 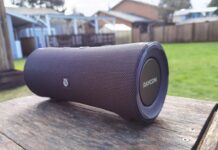 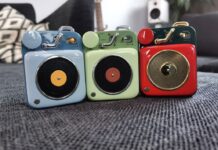 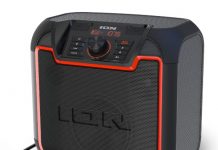