Jabra continues its trend of following an Elite earbud release a few months later with an “Active” version. In this case it’s the Jabra Elite Active 75t true wireless earbuds. I just wrapped up testing on Jabra’s latest, and here’s what I thought about them. Cracking open the box, these were instantly recognizable as Jabra earbuds. The branding on the multifunction buttons is pretty obvious, but Jabra earbuds also stand out because of the prominent cutouts for microphones. This is a company that takes voice calls seriously, so there are four MEMS microphones in total. Jabra does a great job of making setup straightforward. Instructions in the box illustrate the steps, which amount to download the mobile app (available for both iOS and Android), pair the buds via your smartphone’s Bluetooth setting, put the buds back in the case and wait for a firmware update to download and install. The case even flashes a magenta LED to let you know it’s chewing through that update.

These are quite compact earbuds. They fit nicely in my ears, they were light and comfortable enough that I soon forgot they were there. I didn’t do any intense exercise, but going up and down stairs, walking the dogs, and picking up branches in the yard all failed to cause one to pop out. Battery life is excellent. Jabra says up to 7.5 hours on a charge (the case holds over three additional charges), and I saw very close to that in testing. Audio quality is good for this price range (and for earbuds), and Jabra’s app lets you tweak it with a five-band EQ. When watching streaming video, voices stayed in sync with the action.

The buds worked well with Siri (your choice of voice assistant is one tap away), and the “hear through” feature was useful in a house currently full of people 24/7. The feature utilizes those microphones to play ambient noise in the buds so you can hear what’s going on without taking them out. If I detected a disturbance in the background, “hear through” let me zone back in to see what the fuss was about.

In 2018, I reviewed Jabra’s Elite Active 65t earbuds—the direct predecessor for this model. What a difference a year and a half makes! Jabra has addressed all the complaints I had with the older earbuds.

Thanks to Bluetooth 5.0, battery life has been dramatically improved. The buds themselves are 20% smaller. That makes them more comfortable to wear, and they stay in place better. When I tested the Elite Active 65t earbuds, one popped out while I was gardening and I almost lost it. Not an issue with the Elite Active 75t buds.

The battery case is more compact, it gets an upgrade to USB-C (which is far more convenient when you need to plug in a charge cable), and Jabra redesigned the latch. I found the friction latch on the older earbuds was an exercise in frustration, while the Elite Active 75t charge case uses a magnetic closure that is far more convenient.

One feature did disappear, though. The Elite Active 65t earbuds had a built-in accelerometer to count steps. That’s gone this time around. However, between smartphones, smart watches and fitness trackers, pretty much everyone already has other devices counting their steps anyway.

How do these differ from the Elite 75t earbuds?

Why would you want to dunk your expensive wireless earbuds in water? You wouldn’t—although I did during testing, and they survived just fine. The stronger water resistance is peace of mind. You can do hot yoga, or run a marathon in torrential rain without thinking twice about it. I’ve already established that both the Elite 75t and Elite Active 75t earbuds are great picks if you’re in search of true wireless earbuds. They offer a comfortable and reasonably secure fit, they sound good, they offer spectacular battery life, they work well with voice calls, they offer one-touch support for the digital assistant of your choice, and they have some really useful features—including “hear through” for ambient noise awareness.

So which of the two should you buy?

If basic water resistance (being “sweatproof”) is good enough, save yourself a few dollars and go with the Elite 75t earbuds. If you’re at all concerned about exposure to water or excessive sweat, the Elite Active 75t earbuds have you covered with robust IP57 water resistance. Either way, you’re getting a solid set of true wireless earbuds. You’ll find the Jabra Elite Active 75t earbuds, along with all the top brands in wireless, true wireless and sport earbuds. 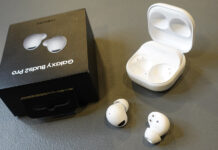