If CES 2023 was any indication, Hisense is going to have a pretty great year. The brand unveiled several new ULED TVs, Laser TVs, appliances, and sound bars. Here’s a recap of what Hisense announced at the show.

You’ve probably heard of OLED and Mini-LED. Both terms refer to the backlight or way of lighting the TV. OLED TVs use organic light emitting diodes that are individually lit so they turn off and on independently. Mini-LED TVs are a backlight that uses LED technology, but Mini-LEDs are much smaller so thousands can be added to a TV.

ULED, a term Hisense uses to refer to Ultra LED, is a collection of technology built into the TV including Ultra Smooth Motion Rate, Ultra Local Dimming, Ultra 4K Resolution, and Ultra Wide Colour Gamut. A ULED TV has a Mini-LED backlight, and Hisense’s combined technology results in a TV that is brighter, has a wider colour palette, and is sharper than a standard Mini-LED TV.

Hisense introduced several Mini LED TVs from their ULED series. They are available in a variety of sizes and different price points, so there is something for everyone. Winner of a CES Innovation Honoree award, the Hisense ULED X is available as a massive 110-inch 8K Mini-LED TV that uses active intelligent backlight control. It has a peak brightness of 2500 nits, HDR, and a 3.1.2 surround sound system built in that uses a left and right dual theatre audio design. If you’re looking for a futureproof TV, the Hisense ULED X is a great choice.

The Hisense ULED X is also available as an 85-inch 4K TV with a 16-bit light control algorithm, 5,000 individual dimming zones, and a peak brightness of 2,500 nits. With that combination, this TV will have an ultra-bright picture with brilliant colour and contrast, but the ULED X TV doesn’t stop there. It also has an 80-watt, 7-speaker 4.1.2-channel surround sound system called CineStage X for loud, immersive sound quality.

All 3 TVs run the Google operating system, so you can log in to your Google account and control your smart home devices, search for movies or TV shows with your voice assistant, or stream music to your TV. Hisense also revealed a new projector they’ve called Laser Cinema. If you’re looking for the biggest screen possible and versatile features for your projector, you’ll want to take a look at Hisense projectors.

The L9H TriChroma Laser TV is a 4K ultra-short throw projector using the TriChroma laser engine. With a triple laser configuration, you get 3000 ANSI lumens of brightness, Dolby Vision, and HDR for a bright, detailed picture in every lighting condition. The L9H uses the Google TV operating system for a seamless streaming experience, and it also has Netflix, Wi-Fi 6e, ATSC 3.0, and AirPlay 2. This model includes an ALR projector screen (ambient light rejecting) to enhance picture quality.

The L5H is a 4K ultra short throw laser TV with smart features. It offers 2700 ANSI lumens of brightness for viewing day or night. It pairs an X-Fusion Laser Light Source, Blue Laser + Phosphor Color Filter Laser Engine, and includes a High-gain ALR screen to give you bold, bright image quality for movies, TV shows, and gaming. It even has Dolby Vision HDR and Dolby Atmos with 40-watt speakers so you’ll be able to enjoy your favourite movies without needing to add an extra speaker. Like the L9H, it also has Google TV, Netflix, Wi-Fi 6e, ATSC 3.0, and AirPlay 2.

The Hisense PL1 is a 4K UHD Laser projector with power focus and the ability to project images from 80″ up to 120″. It has 2100 ANSI lumens of brightness and uses the same technology as the L5 to produce bright, clear images. Just like the L9H and the L5, the PL1 has Google TV and Wi-Fi built in. It also has Dolby Atmos Audio and Dolby Vision with HDR10.

The PX2-PRO TriChroma Laser Cinema is an ultra short throw projector with 2400 ANSI lumens of brightness and a powered digital lens focus system for the sharpest picture quality. You can stream your favourite movie on screen sizes from 90 inches to 130 inches on an existing screen. Packed with features including Google TV, high speed HDMI ports, and AirPlay 2, it’s a great option for streaming video, watching movies, and gaming.

Hisense announced a mini projector to add to their projector line. The Hisense Smart Mini is a 4K UHD portable laser projector that’s easy to take with you wherever you go. With 1600 ANSI lumens of brightness it’s perfect for inside and outside, and the Smart Mini can project video up to 150 inches. It has Dolby Vision, HDR10, and Wi-Fi6e along with the VIDAA smart platform for easy navigation and the fastest video streaming.

While they didn’t share many details at CES 2023, Hisense will be offering new sound bars in 2023. Ranging from 2.0 to 5.1.2 channel systems, they will pair perfectly with 2023 Hisense TVs. They have features like Dolby Atmos and DTS and can connect via HDMI eARC, Bluetooth 5.3 or Digital Optical input.

Christine covered the latest appliances from Hisense including a new fridge, gas range, and 3-rack dishwasher. You can take a look at her article for all of the details on these great new appliances.

After reading about the new Hisense TVs and projectors, which are you most interested in? With so many options, it will be hard to choose just one new TV for your home. You can find all of Hisense TVs, projectors, and more at Best Buy. 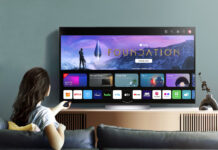