If you’re really old, like me, then you may remember the personal music game changer called the Cassette Walkman. For the first time, you could make your music portable. With a unit not that much larger than a cassette case and a set of (in retrospect, really horrible flimsy headphones), you could listen to music while walking (Walkman. Get it?), riding the bus, or riding a bike. At the time, it was a huge reshaping of personal convenience, how we interacted with music, and how we interacted with others. By all modern standards however, the sound quality left a lot to be desired. The Happy Plugs Air1 in-ear wireless earbuds are another step further away from that unfortunate reality.

As we moved forward through the compact Disc Walkman and into the world of the digital MP3 players, a couple of the bigger changes that allowed us higher quality audio are in headphone and ear bud technology as well as the move to wireless technologies like Bluetooth. Wireless Bluetooth is also a huge factor in convenience as the worries about cords and tangling as well as making sure you have the appropriate connectors are no longer a concern. The technology itself is better as well since the newest iteration of Bluetooth, 5.0, uses less energy and increases battery life, allows for “dual audio” playback on two connected devices at the same time, greater range, faster transfer speeds, and better compression allowing for improved audio quality. All of which makes our music environment even more enjoyable. The Air1 wireless Bluetooth earbuds from the Swedish brand Happy Plugs take advantage of all that current technology offers us including the aforementioned Bluetooth 5.0 connectivity. This gives you a reliable 10 metre range and problem free streaming audio.

As the packaging says, when fully charged the included case will give you up to 14 hours of playtime, but that is a bit confusing. The ear buds themselves will last about 3.5 hours but you can recharge them several times in the case, even if the case isn’t plugged in, until you hit around 14 hours and then you need to plug in and recharge the case. So bottom line is over 3 hours of continuous use for the ear buds themselves. You can also get a quick charge in the case where 15 minutes of charge time gives you an extra 45 minutes of playtime. So depending on how long you plan to be out and using these for, keep in mind these times and plan accordingly.

The Air1 Earbuds are Incredibly Stylish The first thing that stood out for me when I got the Happy Plugs Air1 earbuds was how sleek and modern they looked. The obvious aesthetic comparison is to Apple’s AirPods. I have never actually used AirPods so I can’t make any comparison as far as sound quality goes but I can tell you that most people won’t be able to tell that you aren’t using AirPods, if that matters to you. I do have a set of Jaybird Run ear pods that I regularly use and the sound is comparable between these two sets.

The Air1 has solid bass, in fact, depending on what I was listening to, I had to dial back the bass setting on my phone as it was too strong for my tastes. When listening to something like Carcass or Cannibal Corpse, too much bass simply muddies up the mayhem. It is nice knowing it is there though if the day ever comes that I want to listen to some house mixes or even most pop music. Since I actually have a guilty pleasure that is Katy Perry, yes, I even went to a concert, I played Roar over the Air1s and was really pleased with the amazing mixture of the song’s bass groove melding beautifully with the crisp highs of the keyboards and her vocals. Really quite impressive actually for 2 sleek little wireless earbuds. As for other comparisons with my Jaybirds, I feel like the Runs are slightly more secure in my ears than the Air1s as far as wearing during vigorous activity although I have yet to have one of the Air1s fall out of my ear. Perhaps the trade-off for that is that I can wear the Air1s for a longer period than the Runs as they are much more comfortable in my ears. Especially for long periods. The Air1 earbuds also have many more control options, which I will go over in a bit.

The first time I took the Air1 buds out of their case, they came with an existing charge so I started using them right away and walked to the grocery store while listening to music. I thought I might have had a bad pair of the earbuds as they kept cutting out and crackling. To be honest, I was a little disappointed to say the least. When I got home I put them back in their case and let them fully charge. Since then, I have used them for several hours, made and received phone calls with them, and used them to watch streaming video on my iPad, all with no issues whatsoever. So while I’m not entirely sure what the issues were when I first got and tried them, I would suggest you let them fully charge when you get them before using. Pairing the Air1 earbuds with my iPhone was as simple as possible and when I take them out of the case and pop them in my ears now, they auto connect. When I first put them in, they wouldn’t comfortably sit in my ear and easily slid around threatening to fall out. I noticed that they came with silicone sleeves so I popped those on the bud and voila, perfect fit and they stay put. The other thing I like about the sleeves is that they also provide a better seal that keeps some of the exterior noise from seeping in. While not even close to the level of “noise cancelling”, they do provide pretty good noise isolation. I could hear just enough of the outside world that I hope I wouldn’t blindly step in front of traffic. The Happy Plugs Air1 earbuds give you amazing flexibility in controlling them with 14 different touch commands. This lets you control volume, change songs, answer and end calls, or access Siri or Google Assistant, depending on your mobile or other connected devices. It has a built-in mic on the right earbud so you need just one bud in place to make a phone call. They are also sweat and splash resistant so you can feel confident using them in various scenarios without constantly fretting about them failing.

For those wanting the styling of Apple’s AirPods without the cost, you need to check out the Air1 earbuds from Happy Plugs. For everyone else that simply wants great sounding and cutting edge wireless earbuds, look no further. Available in White, Pink, Gold, or Black there are options for every taste.

To find out for yourself, stop by your local Best Buy store and check them out, they may be exactly what you were looking for. 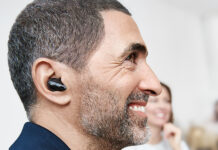 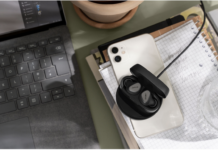