I recently got the chance to build my very own tractor. Well, sort of. It’s actually the Jimu Robot BuilderBots Kit from UBTECH, and it’s really quite a bit of fun. If you’re into smart toys, robotics, or projects you build yourself, read along for full details on this fun new Jimu set.

What is Jimu Robot? The Jimu Robot BuilderBots Kit is a do it yourself build set consisting of over 350 individual pieces that you can build into 2 distinctive construction vehicle robots. There’s GrabberBot (the one that looks similar to an excavator, with the long arm and a claw at the end) and Digbot (the one that looks more like a bulldozer). You can also use your imagination to try and come up with your very own creation if you wish. Among the included pieces are 4 different robotic servo motors (for things like turning the wheels and operating the claw arm or plough), one LED light, one infrared sensor, numerous snap together parts and connector pegs, and one main control box that talks to your smart device and allows you to remotely control your robot. The Jimu Robot BuilderBots Kit is every bit a STEM based learning toy, so kids can learn the basics of science, technology, engineering, and math as they play and have fun building and programming robots. The freely downloadable Jimu App is compatible with Android, iPhone, and iPad devices, and it helps kids to program their bots using Blockly Coding, which is both easy to do and fun. Suitable for kids ages 8 and up, this kit is ideal for those with a mechanical or engineering bent. But, what was my own Jimu experience like? To build, but what to build, that is the question! When I first opened my Jimu Robot BuilderBots Kit, I had to choose whether to build the grabber claw robot (the one that makes up the main image on the front of the box) or the more bulldozer-like robot that seems to be the secondary build with this kit. As the bulldozer bot appealed to me more, I decided to go with that one. After opening the box and seeing that there were no build instructions included, I became immediately skeptical upon reading that the instructions were entirely app based. My fear was that I wouldn’t be able to see small details on my tiny smart phone screen, but this couldn’t have been further from the truth. In reality I found that the instructions for this kit were better than anything else I had ever encountered when building similar kits. Each tiny step is given its own individual animation, no matter how small, and there are often multiple angles to help you see exactly what you must do. Add to that the fact that the set uses colour-coded peg connectors and no tools whatsoever for the build, and you have one very straightforward system. I expected it to take me in the range of 3-5 hours to complete a build of this complexity, but I was easily finished in just about 2 hours (and that was with breaks to take photos and shoot some video footage of what I was doing). There’s even a progress bar at the bottom of your screen to show how much of the build is complete at any given moment. I really could not have been happier with the build process of this robot. I literally had no missteps throughout the entire process. That never happens!!

Fun with the Finished Product The first thing I wanted to do once I had my bot fully built was try driving it around using the control pad screen in the app. This was actually quite a bit of fun as I found the controls to be pretty responsive to the inputs I was giving. Among the operations that I could control were motors for the moving tank treads (both forward and backward driving), one for the plough-like scoop section that I could easily lift up and down, and one for the rotating LED light at the top of the bot. Each of these servos was easy to control, and I also found that turning the DigBot was a breeze as the two sets of treads knew exactly what to do whenever I gave the proper order. For me, this particular play pattern was as much fun as I was looking for in my DigBot, but there’s so much more that you can do with the impressive Jimu App, as we’ll see in the next paragraph. The Jimu App has a number of different ways that you can play with and interact with your Jimu robot. For instance, you can go into the “Controls” tab and drive your bot all around using the screen based joystick, you can click on the “Actions” tab to access a variety of different sound and movement icons, or, you can enter the “Coding” screen and use Blocky Coding to program your bot to do whatever you like. If you build your set into GrabberBot, you can have it pick things up (it perceives them using its special infrared sensor). If you build the DigBot, as I did, you can have it scoop things up or push them around. Also cool is the fact that Jimu has its own online community that you can become a part of. Share your own unique creations with other Jimu enthusiasts, or discover what others have created and try to recreate (or improve on) them yourself. It’s a fun and social way to learn new techniques and designs from a whole world of potential new friends. Note: I didn’t try this feature myself as I just went with one of the official builds and didn’t really feel like I had anything unique to contribute. Still, it sounds like a cool way to explore the Jimu universe with others that share an interest in the Jimu universe. And that is truly what Jimu is—an entire universe, because Jimu has its own interesting backstory and a number of other unique sets and characters that you can also pick up. For instance, there’s the Jimu Buzzbot and Muttbot Robot Kit, which you may also be interested in.

Please take a few minutes to watch my brief video review of the Jimu Robot BuilderBots Kit. In it I show part of the build process, provide an up close look at the finished DigBot, drive the bot around a bit and let it do its thing, and show you what you can do with a completed robot once you get started with the app. It should give you a pretty good idea of what this set is all about: 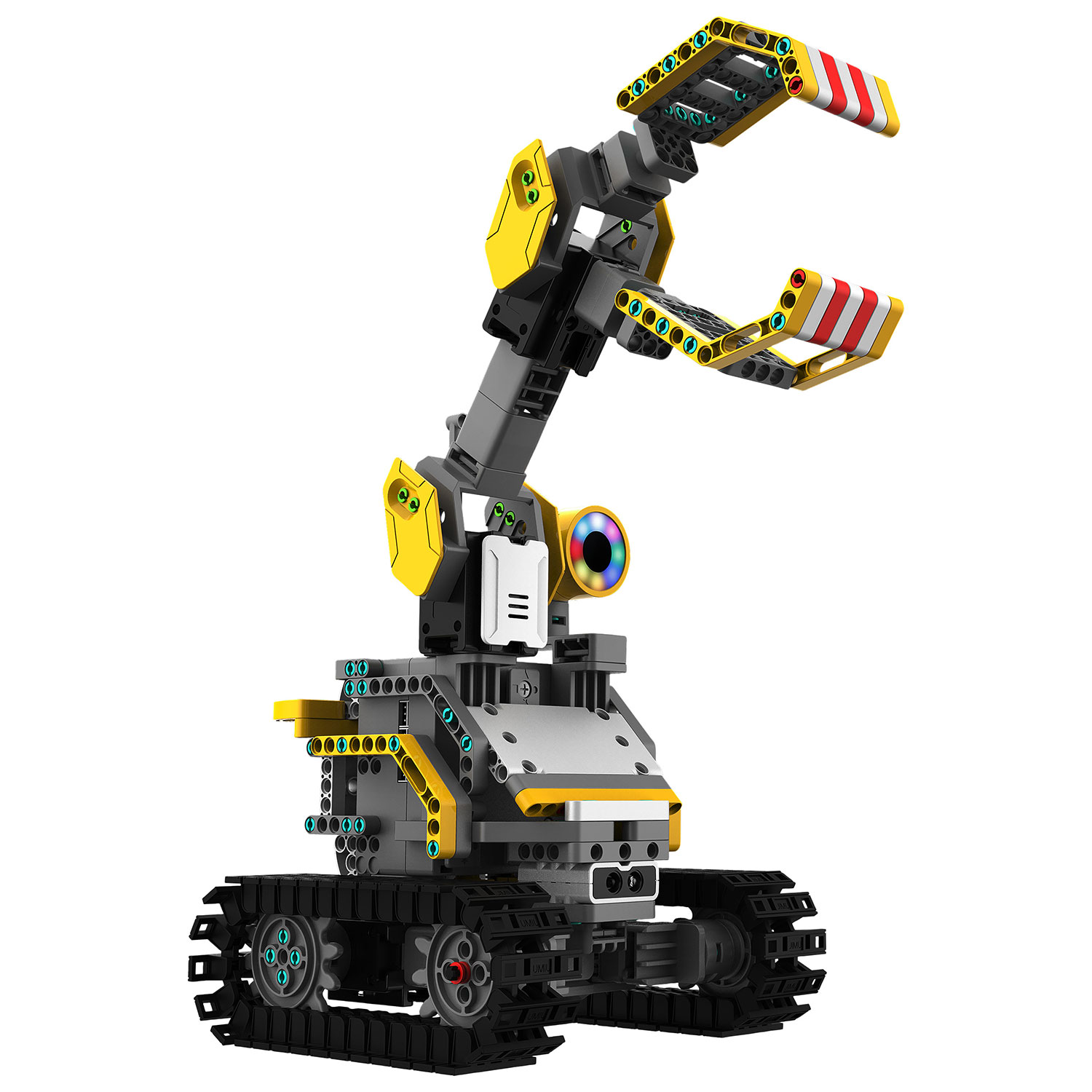 Not being a big math and numbers guy myself, I’m never too sure how much I’m going to like these build robot sets before getting started, yet in every single case I always find myself impressed and having fun. The Jimu set is no exception, and I can certainly give it a recommendation for the right kind of child. The ideal candidate for enjoying this type of toy is someone that loves to build things and be creative. If they also enjoy using smart phone apps and are generally interested in STEM based toys, then there’s a pretty good chance that they’ll really like this kit a lot—and possibly even do some serious learning along the way. For me, the building part was the most fun. I wasn’t as much into the app based play as I sometimes am with other smart toys. Still, I’m not exactly the target user for this toy, and I still really enjoyed it overall. It’s definitely worth a look.