Shooting photos or video in 360-degrees is a unique proposition that has only become readily available to consumers in the last few years. Prior to that, it was either expensive or out of reach, and few options to display the content anyway. The LG 360 Cam is a pocket-sized camera that can shoot in 180- or 360-degrees, and works with any Android phone, not just LG’s models.

The 360 Cam is part of a collection of devices LG calls “Friends” that are designed to work with the LG G5, but it isn’t exclusive to that phone because the LG 360 Cam Manager and 360 Cam Viewer apps are freely available on Google Play and even the App Store on iOS.

The 360 Cam is nicely designed in that it isn’t too big to take anywhere, yet small enough to put away in a pocket or purse. It features two lenses at 16-megapixels each to capture 2K video at 180-degrees, which are then stitched together using software on a compatible phone or computer to create a 360-degree image or video.

The power button is on the edge, with LED indicators noting when the Cam is shooting in 180 or 360. On one side under the lens is the main action button. A simple button press captures still images, while holding it records live video.

At the bottom, there is a standard screw mount compatible with any tripod, along with a flap that opens up access to the USB-C charging port and microSD card slot. A memory card is required to store captured content (one doesn’t come with the unit), and it’s also possible to transfer it to a phone or tablet immediately afterward. I should note that the protective cap used to cover most of the body also doubles as a holder when attached to the bottom upside down, making it less likely that fingers will obscure the lenses in any way.

Since the 360 Cam has no screen of its own, the app is necessary to provide a live view of the action, and doubles as a remote to shoot photos or video within range of the Cam. Doing this required connecting the phone or tablet directly to the Cam using Wi-Fi Direct, and the reason for that is because it’s the only way to wirelessly push all that data over in real-time, whereas Bluetooth simply can’t manage. This cuts off regular Wi-Fi and cellular data access on the phone while the camera is operational, in part to ensure that nothing interferes with the ad hoc connection. An incoming phone call will suspend recording, while a text message will not. Despite the usefulness of using the cap upside down to create some space, the 360 Cam needed more elevation from my hands in order to show more with fewer obstructions from my hand. A monopod or selfie stick with a screw mount easily does the trick, and in my case, I used a short monopod as I got used to what the Cam could pick up.

I could shoot with the Cam on a whim, knowing that I couldn’t actually see what it would look like until I fired up the app. The spontaneity that it offers is good to have when there are plenty of situations, especially when travelling, where 360-degree photos or video would be cool to have. In travel, particularly, it’s not always practical (and perhaps not safe, depending where you’re visiting) to have an expensive smartphone in hand, so there is an element of hope in shooting with the Cam when going blind.

I’m not an extreme sports guy, but I can see the appeal in bringing a camera like this into a scene. It’s not water-resistant, sandproof or snowproof in any way, so best not to take a chance with activities in those settings, but for anything else on land or air, the possibilities are seemingly endless. The only thing is that it’s not as easy to mount as action cams are, and the vertical form factor could figure into that, too.

There doesn’t appear to be any optical image stabilization in the lenses, so it can be susceptible to movement, except the real challenge is in stitching together fast-moving objects. For example, sticking the Cam out of a sunroof while driving on a highway exposed the weaknesses by showing layered blocks or empty spaces that ruined the image. In fairness, this is something 360-degree cameras do struggle with at times because of the latency in capturing the images and then stitching them together in succession.

Video in such a situation would also be difficult to use if the audio is blanketed by wind hitting the different built-in microphones. The higher the speed, the harder it is to hear anything of substance. That said, the 360 Cam does record in 5.1 surround sound, and when conditions are ripe, the results are excellent.

The LG 360 Cam app has better control than one might expect. There’s Auto, along with a manual camera mode to adjust composition on the fly. This is great when shooting at night or low-light to improve a shot which would otherwise be worse in Auto, but does require some trial and error if you don’t know the settings. Even though I did already know, I found the layout user-friendly and easy to pick up for novices. 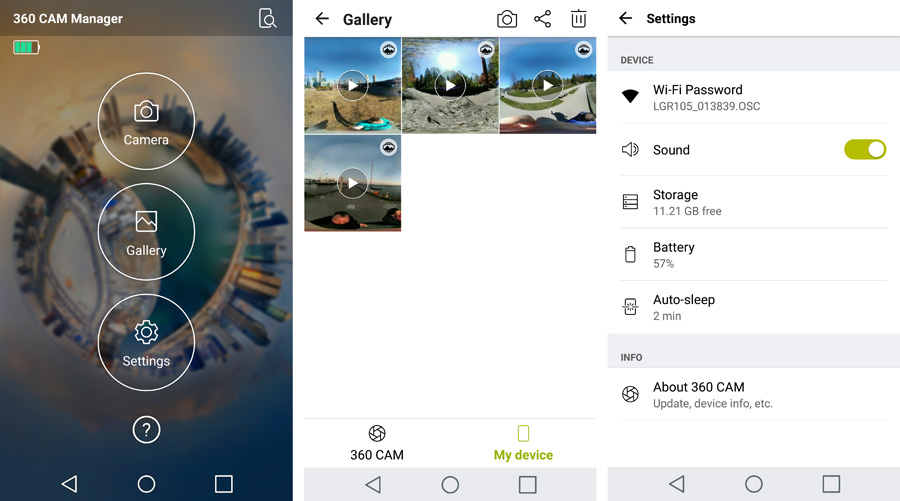 A microSD card was essential to using the 360 Cam, and one of good size was necessary, too. Images and videos are going to be larger than usual because they are in 2K resolution, making file sizes larger, as a result. Transferring the content to a computer is easy enough by just removing the card and slotting it into a computer, yet it can also be done wirelessly from Cam to phone or tablet.

The advantage of that ad hoc connection is that it makes it easier to share something in the moment. It’s not fast enough to be on par with shooting on a phone and immediately sharing it on social media, but it’s still better than having to wait to unload the whole lot.

VR headsets are another option. Any Google Cardboard type of headset will be able to view anything the 360 Cam captures, and I even managed to view files using the Samsung Gear VR by copying the files over to a Galaxy S7 using Dropbox.

The LG 360 Cam is part of a family, yet functions perfectly fine on its own. LG smartly opened things up by making the compatible app available to other Android devices and the iPhone, and in doing so, created a 360-degree camera that could fit in just about anywhere. The novelty of 360-degree imaging is still very new. The likeability factor is also high because the 360 Cam works much the same as pocket video cameras did over five years ago (anyone remember the Flip?).

While it works wonderfully with the LG G5, it is perfectly fine with other Android phones and tablets as well (even better if it runs on Android Lollipop or Marshmallow). Even the iPhone offers a good experience.

The LG 360 Cam is coming to Best Buy and will be available soon.